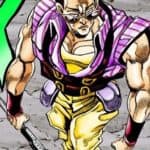 Alessi JoJo from JoJo’s Bizarre Adventure – Stardust Crusaders is one of Egypt’s 9 Glory Gods. He is a minor antagonist and most notable for his attempts to kill Polnareff and Jotaro.

A cowardly man, short, and ugly mercenary, Alessi JoJo enjoys picking on people. He is fond of using his Alessi’s Stand, Sethan, to reverse the age of anyone who comes into contact with it.

Alessi’s Stand Sethan power is named after Set, the Egyptian God of Tornadoes and Storms.

Throughout many encounters in JoJo’s Bizarre Adventure, it becomes clear that Alessi is exceptionally sadistic and takes joy in others’ suffering. Another aspect of Alessi’s character is that he is very creepy and deviant.

He is someone who has no self-control. He’s a manchild who relies on his Stand Sethan for help in situations. Alessi is also a very sadistic person who delights in seeing people suffer and is usually very quick to anger.

Alessi JoJo is an antagonist that at first appears somewhat soft, perhaps even misunderstood, but who quickly reveals his true colors as the show progresses.

He is someone who will do whatever it takes to get what he wishes, a villain who is made of steel in the struggle against his enemies.

Alessi is always on the lookout for a good deal, and he is willing to do anything to land it. He does not fear killing to accomplish his objectives.

The core part of Alessi’s story in JoJo’s Bizarre Adventure is his mission to eliminate Jotaro Kujo and friends after being hired by Dio’s mercenaries.

Alessi’s authentic colors are revealed almost instantly upon his arrival in Luxor. He bumps into a boy and uses it as an excuse to beat him up.

Alessi is spotted as he trails Polnareff and Jotaro. Alessi uses Sethan to appear as though he was a pedestrian searching for a dropped coin in an attempt to deflect attention.

The attempt fails, Polnareff slices Alessi, and he runs away, hoping to buy enough time to carry out his plan.

Eventually, Alessi corners Polnareff. It’s no surprise Silver Chariot can deflect his bullets when he tries to shoot the boy; as he attempts once more to strike Polnareff with an ax, the blade breaks, stabbing through Alessi’s neck.

Alessi is defeated by Polnareff but continues his pursuit. The two begin a sick game of hide-and-seek with each other. Alessi bursts into the room Polnareff has locked himself in.

Alessi JoJo sees four potential hiding places, while Polnareff sees only three. Alessi destroys Polnareff’s hiding spots in an attempt to locate him but is unsuccessful.

Polnareff has hidden in the aquarium to evade Alessi, who tries to investigate it only to be ambushed by Polnareff. Alessi falls out of a window, and Polnareff escapes again.

Alessi then encounters Jotaro. While down from his fight with Polnareff, he is confident that Jotaro is too young to summon Star Platinum and be easily defeated.

However, he finds that Jotaro is physically strong—even as a child—and is caught off guard again. Several punches to the face later, and the mercenary Alessi is knocked out cold. Jotaro’s fighting spirit is what allowed him to prevail in a fight against an enemy Stand user.

Overall, the mercenary Alessi is a simple, juvenile crook. His defeat by Jotaro and Polnareff takes him down a peg as it dawns on him that he’s outmatched. It becomes Alessi’s fate to retreat, potentially never to be seen again.