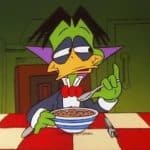 Count Duckula is not only a villain but also one of the main characters in Danger Mouse. Additionally, he’s also the title character in the Count Duckula cartoon spin-off series.

The first appearance of Count Duckula is in an episode named Danger Mouse Four Tasks’ where he appears as an evil vampire duck who appears to have no obvious fangs, except when necessary.

He can fly without transforming into a bat. He is in a suit printed with a letter D’ on it, and when speaking, his voice resembles that of a lisp.

He’s a Villain who’s much interested in fame, but this contradicts Danger Mouse’s impression, resulting in a huge conflict between them.

His evil schemes are crafted to make him increase his popularity by making sure he’s in the spotlight.

He even goes further to partner with Danger Mouse’s worst enemy, Baron Silas Greenback, at a certain occasion to conquer the Danger Mouse.

However, DM realizes Count Duckula’s mission and stops him before he succeeds.

In the series, it is discovered that Duckula was once a member of a long-time dynasty of vampire ducts and that he has reincarnated from the dynasty.

This is because he has been killed several times, but he’s brought back to life through sacrifices and offerings.

It’s believed that the Count Duckula cartoon before the Danger Mouse series might have been murdered even before the spin-off but was brought back into life.

This is true because his Nanny (who’s his housekeeper) and butler attempt to reincarnate him through pouring sacred blood into his life back casket, and they succeed.

However, Nanny confuses a bottle of sacred blood with Tomato Ketchup, and although it succeeds in awakening Duckula, this transforms him into a veggie-loving vampire who hates blood.

He passionately loves show business despite being a fangless vampire. While he’s in a spooky ancestral home by the name of Castle Duckula, he’s able to teleport to virtually all places to seek fortune and fame.

However, the bad news is that he doesn’t succeed in his plans despite all that effort.

As a villain, Count Duckula is a proud vampire duck in the Danger Mouse series. His voice has a lisp, but he would often mumble.

His ability to transform into a winged cricket bat helped him change his appearance to disappear in a smoke flash that could also transfigure his clothes.

Being famous becomes his main goal, and this makes him host his displays where he could showcase his despicable presentations such as singing and acting.

He’s best at blackmailing and applying excessive force to his opponents.

Although he loses his lisp in the Count Duckula series, he has the ambition to be the most famous and fortunate more than his predecessors.

However, he’s more determined to earn his fortunes and fame genuinely. He is no longer happily living a vampire life, and he doesn’t want to reincarnate into a vampire anymore.

Still, he faces a setback as Igor tries to convince him not to denounce his ancestor’s legacy as a vampire. He’s determined to change his ancestral background legacy by traveling through time.

Also, he’s very annoyed by his castle appearance as gloomy and dark. This makes him conspire to destroy the entire world.