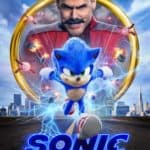 Sonic The Hedgehog races from video games and cartoons to the big screen. Decades of video gaming and Saturday morning cartoons finally culminate in a surprisingly fun action film that entertains the whole family.

With a quick introduction to get new fans up to speed, Sonic flees his comfortable island of loops, ramps, and gold rings to find a new home base on Earth.

Beginning to realize the value of his power, Sonic is encouraged to lay low, so his power does not end up in the wrong hands.

Being forced from his comfortable paradise, his life on Earth appears to be quite different. Now in hiding, Sonic entertains himself in his cave with exercise, games, and magazines.

Needing a friend, he ventures out to secretly interact with Donut Lord, Tom, the local sheriff. Zipping past Tom’s radar gun, Sonic tries to get a new high score.

Defending a small empty town, Donut Lord is often bored helping the locals with basic chores. Not living up to his full potential, Tom applies for a job in San Francisco and is accepted.

Before Tom can leave for his new job, his world and Sonic’s colliding launch an unexpected journey.

Sonic and Tom work together to defeat the brilliant Dr. Robotnik, who a comical Jim Carrey plays. Jim brings his usual over-the-top enthusiasm to the role.

Although a mild-tempered villain, Dr. Robotnik has enough weapons and bad intentions to represent the video game boss that everyone loves to beat.

The live-action, in combination with an animated Sonic, meld together seamlessly. Most scenes feature Sonic, an animated character on Earth interacting with nature and many people.

Some scenes even involve Sonic with large groups of people; the merger of animation and live-action is never a distraction to the viewer.

One of the reasons the animated Sonic meshes so well is because he is the fans’ design. When Sonic’s first sneak peek was revealed, there was an enormous backlash from the fans, thus redesigns flooded in.

The studio listened and corrected the Sonic animation proportions to the echoed sigh of relief from the global fan base.

For decades the Sonic franchise has been building its global fan base. From video games to cartoons, Sonic has been a favorite for young boys and girls everywhere.

None more popular than the SEGA video game of Sonic racing along an obstacle course to collect as many rings as possible and then finishing with a showdown against Dr. Robotnik, just like the movie.

This game was one of my favorites and can still be played on most backward-compatible consoles, as well as phones or tablets.

The ads were very distracting and made the movie seem choppy at times. Although the ads are effective (since you won’t forget them), they damage the credibility of the overall film.

It’s not clear if the blame for the poor product placement belongs to the studio or director. This film is Jeff Fowler’s first blockbuster hit as a director.

He has also directed Gopher Broke back in 2004, an animated film that most movie fans have never heard of before. On his second swing at-bat, Fowler has done well with Sonic The Hedgehog, bringing over $300 million worldwide in less than a month.

Even with distracting product placement, and the title track singing “Super Sonic” as the blue blur zips around, the movie is all the hype that Sonic fans need.

The rest of the soundtrack helps build anticipation and compliments the action as Sonic battles against Dr. Robotnik.

Sonic The Hedgehog is a highly anticipated movie with its deep roots in video games and cartoons. With high expectations, the film adaptation keeps pace with lifelong fans and races away with kids’ hearts, further cementing the Sonic franchise for years to come.

With a sequel undoubtedly in the works [be sure to continue watching after the credits], hopefully, the studio will continue to listen to fans and ease up on the consumerism aspect the next time.

Overall, the film gets a passing grade for the animation and live-action mix and meets fans’ expectations. The movie also has positive messages about friendship, overcoming challenges, and appreciation for all we have.

Sonic The Hedgehog is a fun family film that all can enjoy.