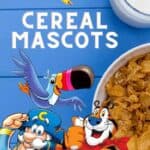 They greet us every morning with a smile, and we recognize the brand by the characters we’ve seen on Saturday mornings commercials between cartoons.

Cereal brand mascots keep reminding us to eat our breakfast and stay healthy. All you need to do is eat their bowl of cereal, and you are good to go!

They became part of every life of children and adults who grew up recognizing and loving them.

Below is a list of the famous cereal mascots we’ve loved as kids and adults.

Tony The Tiger on Frosted Flakes Cereal by Kellogg’s

Tony the Tiger is on top of the list as one of the most recognizable breakfast cereal mascots and can be found on the box of Frosted Flakes cereal. He wears a red bandana that compliments his tiger color combination of orange fur with black stripes.

Tony the Tiger’s character made him one of the greatest mascots because he encourages children to eat breakfast and become properly nourished to achieve their goals.

Tony the Tiger is a mascot of fun and encouragement and an icon of starting your day right plus, he promotes high energy levels in a healthy way.

While cereal brand mascots are usually printed large enough to be noticed on the box, this little guy never failed to get noticed! Buzz Bee can be found on the box of Honey Nut Cheerios Cereal.

Buzz Bee wears an orange shirt and usually holds a honey dipper while flying around the cereal bowl plus, he looks like the cartoon character from the new animated movie, Bee Movie.

Buzz Bee encourages children to be busy and enthusiastic every morning while eating Honey Nut Cheerios.

Dig ‘Em Frog is a fun-loving animated frog from commercials in 1972 and became very popular with kids. Honey Smacks has undergone many name changes. It was initially called Sugar Smacks in the 80s and is called Smacks outside of the United States.

Kellogg’s decided to retire Dig ‘Em Frog and was replaced by a bear in 1986. Kellogg’s received letters and messages from consumers begging Dig ‘Em Frog to return.

The protesters led them to bring back Dig ‘Em Frog. It may seem unusual, but this shows that cereal mascots are a big deal for consumers regarding breakfast cereal.

Sonny the Cuckoo on Cocoa Puffs Cereal by General Mill’s

Sonny the Cuckoo was initially wearing a pink shirt with white stripes. Later, General Mills redrew him to be more simplistic with a purple shirt and green pants.

He loved the crunchy and chocolatey taste of his cereal that made his iconic catchphrase, “I’m cuckoo for Cocoa Puffs!” Sonny reminds us that breakfast is the most important meal of the day, and Cocoa Puffs should be part of it!

Sonny the Cuckoo is one of the most energetic cereal mascots, and he represents high energy levels and is always excited to start the day!

Trix Rabbit is the iconic cereal mascot and the main character of a breakfast cereal of its name! Trix Rabbit appears as plain white and wears nothing.

His bright white fur complements the rainbow-colored cereal clusters, as shown on the box. Trix Rabbit is also one of the most recognizable next to Tony the Tiger on Frosted Flakes cereal.

In commercials, he is constantly denied his Trix Cereal and wants to trick the children into giving him his cereal. He is always in disguise but gets discovered every time!

The kids always tease him by reminding him with their catchphrase, “Silly rabbit! Trix are for kids!”

Cap’n Crunch cereal was named after the cereal mascot, which made him very recognizable because of the slogan “it stays crunchy, even with milk!”

Cap’n Crunch wears a white mustache, eyebrows, a blue uniform, and a Napoleon-style hat. Cap’n Crunch has a confident attitude and a determination to protect the Cap’n Crunch cereal from pirates.

Cap’n Crunch cereal comes in a few different varieties and is made by the Quaker Oats company. Interestingly they also have an iconic guy image on their other oat products.

Quisp is an alien with a propeller beanie on its head made by Quaker Oats company. Quisp became popular with kids as he represented pure energy with his crazy energy levels on his cereal.

The alien mascot made the saucer-shaped corn cereal very popular with kids and adults everywhere as Quisp brags that his cereal’s crisp flavor is out of this world!

When you see Toucan Sam on the box, you can imagine the sweet smell and tropical fruity taste of the sweet-flavored Froot Loops!

It was created in the 1960s, and Toucan Sam has been reminding the children to follow the sweet smell of Froot Loops and enjoy it as their breakfast, as it comes with the slogan, “follow my nose, it always knows.”

Toucan Sam’s body is colored blue, and his beak is covered by the three original colors of Froot Loops, red, yellow, and orange. His unique beak color made Toucan Sam a synonymous image of Froot Loops. Let your nose guide you to the fruity flavors and let the fun at breakfast begin!

Count Chocula is the main character and one of the five monster kinds of cereal mascots representing Count Chocula cereal. These cereals are usually popular during Halloween and give a spooky, scary feel.

Having their favorite breakfast cereals box in the house is frightfully fun. Count Chocula and the gang make everyday breakfast deliciously scary. The other monster mascots are Frankenberry, Boo Berry, Fruit Brute, and Fruity Mummy.

Lucky the Leprechaun on Lucky Charms Cereal by General Mill’s

Lucky the Leprechaun is not so lucky because he is always in a situation where somebody steals his sugary cereals. He tries to use his leprechaun magic to help get his cereals.

Lucky has a big heart as children usually steal his cereal, and when he recovers it, he shares a meal with the children who took it.

Lucky wears the usual leprechaun clothes with a green jacket and a hat with a cloverleaf, thus the name “Lucky.” Lucky encourages children to be kind and to share their breakfast and goodness with others as it comes with the catchphrase, “they’re magically delicious!”

Snap, Crackle, and Pop on Rice Krispies Cereal by Kellogg’s

They are elf-like cartoon characters, and their clothes vary depending on the drawing or theme of the cereal, but their headgear can still identify them. Snap wears a baker’s hat, Crackle wears a red striped cap, and Pop a military hat.

A fourth character, Pow, represented the nutritional value of the cereal, but the idea was short-lived and no longer considered part of the usual group.

Mini on Frosted Mini-Wheats by Kelloggs

Mini is a frosted wheat square with eyes and a mouth. He often coaches young kids about the benefits of a balanced breakfast.

He is always helping kids realize their full potential in the classroom on a full stomach of Frosted Mini-Whats. A hearty breakfast of wheat cereal can help kids be more attentive at school.

Crazy Craving is a small furry creature that looks like a fluff ball with large bulging eyes. He craves for Honeycomb and shouts, “me want Honeycomb!”

Crazy Craving was introduced as the Honeycomb mascot in 1995. Post cereal showed him in many television commercials as a wild creature zipping around and looking for Honeycomb like a crazy Tazmanian Devil.

Sugar Bear is a cute brown bear with a blue sweater. He has been around for over 40 years, sharing his love of Golden Crisp by saying his tagline, “can’t get enough of that Golden Crisp.”

In the ’80s, Sugar Bear turned from a hip and cool bear to a Super Bear when he ate Golden Crisp.

Sunny on Raisin Bran by Kelloggs

He is cheerful and bright. He always reminds cereal fans that each box of Rasin Bran comes with two full scoops of sun-dried raisins.

Cornelius is a green rooster that famously represents the Corn Flakes cereal. He has red hair, long orange legs, a yellow beak, and three red, yellow, and green tail feathers.

The green rooster became the Corn Flakes mascot in 1957 and is the most popular character for the brand thus far.

Fred Flinstone on Fruity Pebbles and Cocoa Pebbles by Post

Fred Flinstone and Barney Rubble are two of the most popular cereal mascots for Fruity Pebbles and Cocoa Pebbles. However, other Flinstone family members have also been on the cover of the colorful cereal boxes.

Cereal mascots make every breakfast cereal brand fun and exciting for consumers. They are printed on the box in bright colors to bring out the kid in you, and they make breakfast fun as a start to your day.

These cereal mascot friends come from our favorite boxes that remind us that breakfast is essential to the day. With our busy lives, it’s never too late to open a box, eat, and become nourished with your favorite cereal. Find them in a grocery store cereal aisle near you.

Who will be the next famous cereal character? Possibly some female cereal brand mascots are coming soon.