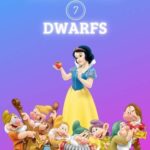 The seven dwarfs names are Happy, Doc, Grumpy, Dopey, Bashful, Sleepy, and Sneezy from the Disney movie Snow White and the Seven Dwarfs. The animated film is Walt Disney’s first feature-length film and was released on the big screen in 1937.

The golden age of Disney animation inspired the adaptation of The Brothers Grimm who is credited with the original German fairy tale that inspired the Disney film.

The 7 dwarf’s names were not mentioned in the original fairy tale The Brothers Grimm collected. Instead, the seven dwarfs names were introduced in 1912 in the broadway play, “Snow White and the Seven Dwarfs” and included later in the animated film.

Have you ever asked yourself, “What are the seven dwarfs names in Snow White?”

Since the movie came out, Disney fans have loved little Snow White’s Dwarfs, her little roommates who help protect her from the Evil Queen’s poisoned apple and magic mirror.

But what are the 7 dwarfs names from Snow White and Seven Dwarfs characters list? What are their characteristics and personalities? Ready for some fun facts? Below are the original 7 dwarfs: Happy, Doc, Grumpy, Dopey, Bashful, Sleepy, and Sneezy.

Happy is one of the most easily recognizable of the seven dwarfs names people have come to love.

Happy never walks around with a frown and is always happy to spread joy with his fellow roommates. Otis Harlan voiced Happy in the movie, which was a perfect fit for their happy-go-lucky personalities.

Some of Happy’s favorite things to do are dance, eat, and party.

A fun fact about Happy is that he was the only one to introduce himself to the Disney Princess, Snow White. The rest were tongue-tied. Visit our Happy dwarf page to learn more about this jolly character.

The character Doc was voiced by Roy Atwell in Snow White and the Seven Dwarves.

Doc is often viewed as the leader of the group. He is outspoken and, at times, has a little bossy attitude. Some think that Doc is a poor leader because he can sometimes be a bit clueless.

His loving and kind attitude brings him back to the front of the group, though!

A possible explanation for Doc Snow White getting so flustered and losing his train of thought could be that he is distracted. The only dwarf that Doc seems to bump heads with is Grumpy, which is no surprise.

Doc is the only Dwarf that wears glasses and an orange-brown tunic. Visit our Doc dwarf page to learn more about his leadership style.

Grumpy, voiced by Pinto Colvig, is one of the most popular Disney dwarfs of the bunch.

Grumpy is, as expected, grumpy and grouchy. He has a short fuse that is easily lit but deals with much pressure throughout the day.

Although most people see him as a grumpy old dwarf, he is one of the movie’s kindest and most loving characters.

Grumpy’s signature stance is with a smirk or scowl on the face and his arms folded together in a red tunic. He looks like he is in disgust at all times and doesn’t get along with Happy or Dopey. Visit our Grumpy dwarf page to learn more about his grumpy personality.

Did you know that Dopey and Bugs Bunny have something in common? The voice of Bugs Bunny and Dopey are from the talented Mel Blanc!

Dopey is a fun character of the seven dwarfs and a fan-favorite character that many have come to love. Although he is a character with no words, his personality still shows through.

He uses noises and makes expressions that display his true emotions to feel clueless about him.

When Dopey isn’t doing something to make another person laugh or smile, he supports Sneezy and the rest of the dwarves. Most people know Dopey by his silly face, purple hat, and green tunic. He is, surprisingly, the only dwarf without a beard! Visit our Dopey dwarf page to learn more about Snow White’s favorite dwarf.

Bashful is known for batting his soft little eyelashes and blushing, especially when a princess is around.

Scotty Mattraw is the actor who voiced Bashful in the famous movie. Whether Bashful feels embarrassed or flirty, he always looks cute.

He likes to hide behind his beard and try to cover up his face at any chance.

Bashful has a very introverted side that doesn’t like to be the center of attention. Bashful only dreams of sweet love and a happy ending— particularly with Snow White.

Bashful wears a yellow-brown tunic with a greenish-teal hat. He likes to blend in with his surroundings, but his rosy cheeks always shine through. Visit our Bashful dwarf page to learn more about his romantic side.

One of the most relatable characters of the seven dwarfs is sleepy and always has a tired look.

Sterling Holloway voiced Sleepy; he is also the voice of Winnie the Pooh! Although most lines involve yawning and snoring, Sleepy portrays his laid-back style.

Sleepy is so relaxed that he can fall asleep practically anywhere, even if he just woke up! Although many people think he is a lazy character, he puts in a lot of hard work and earns all the rest he takes.

Sleepy also wears a greenish-teal hat and yellow outfit, like Bashful, and his eyes always look heavy. As you watch the movie, you might notice yourself yawning with him and rubbing your eyes towards the end.

Walt Disney insisted Sleepy be drawn with droopy eyelids at all times to appear sleepy. Visit our Sleepy dwarf page to learn more about this tired dwarf.

Sneezy walks around with his finger under his nose, trying to stop a sneeze from coming, but it’s never enough.

Billy Gilbert voiced Sneezy, which was a fitting role because he also dealt with allergies. Did you know that hay fever is the cause of Sneezy’s sneezes? This helps explain the stuffy nose that he experiences.

Sneezy is fortunate to have a group of guys behind him; they constantly look out for him to control his sneezing. One of Sneezy’s closest allies in the movie is Dopey, who always tries to help.

Keep the tissues nearby if you are the “Sneezy” at your home, and prepare for the sniffles. Visit our Sneezy dwarf page to learn more about his hay fever allergies.

The Snow White dwarfs names are made up of a group of men with unique personalities and white hair, except for Dopey.

Early in the Dwarf’s history (prior versions of Snow White Dwarfs), they had different names, such as Jumpy, Lazy, Puffy, Burpy, Stuffy, Defy, and Wheezy. The final decisions of the original names are quite different, as you can see from the list above.

The next time you watch this film, the Snow White Seven Dwarfs characters will be top of mind. You will know all 7 dwarfs names and more about each of these characters. This makes movie-watching fun, especially if you try to see which fellow dwarfs resonate with you.

There are so many personalities all thrown into a small group of dwarves. They know how to bring out the best in each other and work well as a group to make a happy ending.

Check out our Disney cartoon characters page, which allows you to look up your favorite personalities of more famous Disney characters! What are the 7 Dwarfs names meaning, now you know?

More fun articles include learning about Barbie, famous for her princess films, or all the Disney Princesses.

What were the original 7 Dwarfs? 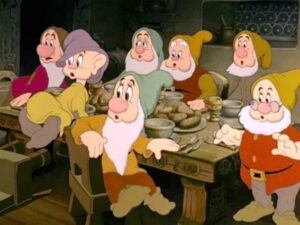 What do the 7 Dwarfs stand for? 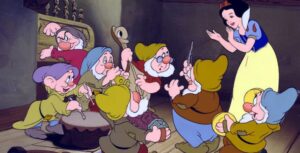 The 7 Dwarfs stand for doing the right thing and caring for one another. The 7 Dwarfs are shown taking care of Snow White and stepping in to protect her the best they can.

What are Snow White 7 Dwarfs called? 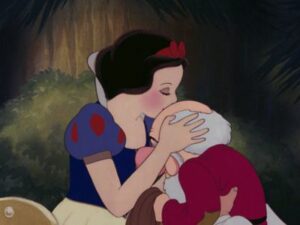 In the film Snow White and the Seven Dwarfs, Snow White stumbles upon a cottage in the woods and meets 7 Dwarfs named Doc, Happy, Sleepy, Sneezy, Bashful, Grumpy, and Dopey. 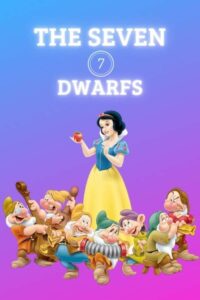 Dwarfs is the normal description for more than one dwarf. Dwarves is a spelling by J.R.R. Tolkien, who popularized the word in his Lord of the Rings book series.

Which of the 7 Dwarfs did not speak? 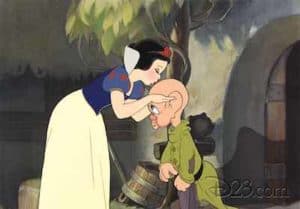 Dopey is the only dwarf that does not speak in Snow White and the Seven Dwarfs. He makes a vocal effort with noises to get attention but does not say any words.

What would the 8th dwarf be called? 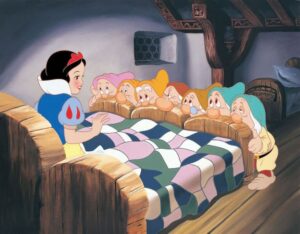 In the film Snow White and the Seven Dwarfs, the dwarfs tell a story to Snow White about an eighth dwarf named Breezy. He was a wandering dwarf who they believe has gone on to find great success and fame.

What order do the seven dwarfs go in? 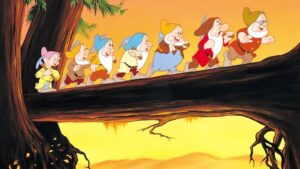 The order of the seven dwarfs is Doc, Grumpy, Happy, Sleepy, Bashful, Sneezy, and Dopey when they sing the song “Heigh-Ho” walking home from the diamond mines.