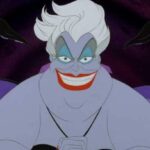 Ugly Disney characters don’t often get a Happily Ever After and are not as cute as Mickey Mouse or a Disney Princess.

The Ugly Disney Characters usually get the short end of the stick even if they aren’t the primary villain in Disney animated movies. However, ugly Disney characters aren’t usually the ones who end up marrying Prince Charming.

Each Disney movie has ugly characters. Some are funny, kind, heroic, and courageous. An ugly-looking character doesn’t mean they are ugly on the inside.

As many believe, beauty is more than skin deep, and there are many characteristics to admire about Disney characters, even if they are considered an ugly cartoon on the outside.

The next time you see fat Disney characters, be sure to overlook their talents and positive personality characteristics.

From the moment she’s first mentioned, we know she’s a sea witch. Usually, a witch character isn’t associated with beauty; they are the opposite of Disney Princesses. When we finally see Ursula, she is a heavier-set witch and wears too much makeup. Prince Eric thinks so as well.

Queen of Hearts- Alice in Wonderland

The Queen of Hearts is someone we hear a lot about in the entire movie. When we get a good look at her, she’s a red-faced heavier-set woman. She reminds me of an animated Miss Trunchbull-except with a crown.

Drizella Tremaine in a green dress and Anastasia Tremaine in a purple dress, two gave stepsisters everywhere a bad name. Young girls should avoid their lousy behavior. Not only do these female characters have big feet, but big mouths as well.

They are constantly bullying Cinderella, even going as far as to rip up a dress she made to go to a ball out of jealousy. The worst thing about these two ugly Disney characters is their personalities and hate for Cinderella.

Scar is the less fortunate brother of Mufasa. He will do whatever it takes to get his share of the Kingdom and all its privileges he believes he deserves. Scar controls the pride lands and group of hyenas. They are the bad guys who want to attack the lions, so they form an alliance.

The hyenas and Scar devise an evil plan to eliminate Mufasa and take over the pride lands. The Lion King is one of Walt Disney Pictures’ highest-earning films.

Yzma is the funniest character that will probably be on this list. Unlike the Queen of Hearts and Ursula, Yzma is skinny and frail and has almost no hair.

She is not attractive or sought after by any other characters in a romantic way. The Emperor’s New Groove is one of the different Disney movies in the bunch, but it has great villains and ugly characters.

Quasimodo is one of the sweetest ugly Disney characters you could meet. He is very kind and always aims to do the right thing, but he was born with a back deformity that gives him an ugly hunchback. Although fans consider him ugly, he remains one of the film’s favorite characters.

Edna is like the tough-love type of person you have in your life. She’s overbearing and demanding. She is the ugly duckling of the film, and the Disney character keeps us laughing in the films The Incredibles and Incredibles 2!

Her taste in fashion isn’t exactly the best, though, with ridiculous outfits and oversized glasses.

He’s a goat man. He’s short, a bit chubby, and has a fiery temper. Only Hercules has the patience to put up with his antics.

Mother Gothel, in her proper form, is a frail older woman with wrinkled skin and silver thinning hair. Her actual age is hundreds of years old, and she can’t manage to stay alive without using the magic of Rapunzel’s golden hair.

Mother Gothel is very selfish and uses her acting abilities to manipulate Rapunzel and get what she wants.

Jafar is one of those people with a vast superiority complex. After many failed attempts, he couldn’t get Princess Jasmine to marry him using his personality alone.

However, more than Jasmine, Jafar realizes he desires ultimate power and control. His unquenchable thirst for power eventually turns out to be his downfall. Jafar is one of the best characters to cheer against.

Many don’t consider The Fates to be villains. They are a group of three deities simply doing their job and are generally not considered evil characters.

Still, that doesn’t mean they aren’t ugly cartoon characters. All three of them share one eye that they use to see the future. They also have stringy hair and long pointy noses.

Roz is one of the most iconic ugly Disney characters. She has a memorable voice that fans can hear when they share her memes on social media. Roz resembles a grumpy slug-like creature with a red coat, pointy eyeglasses, and spiked gray hair.

Also known as the Evil Queen. The Hage is the disguise she picks to get Snow White to trust her as an innocent stranger. The Hage appears as an older woman with missing teeth, hunched over with a long wrinkled nose and blonde hair.

The wicked witches’ disguise works. Snow White is easily fooled because she has a big heart for caring for others.

Randall is the mean rival of Mike and Sully in the Pixar film Monsters Inc. In the series of feature films, he constantly competes to be the best scarer, no matter what it takes.

Scaring is one of Randall’s favorite things. Randall is a purple chameleon but often changes his form to be extra scary or sneaky.

Ugo is the uncle of Luca, who lives in one of the deepest parts of the ocean, where he tries to take Luca to go live with him because of his mother’s request. You can see through his torso area at his organs. Ugo also has sharp teeth that might scare young children.

Smee is the comedic relief in Peter Pan. He’s Captain Hook’s sidekick. He’s short, a bit chubby, and is balding. Smee is your typical cartoon middle-aged man who is primarily bad but can be a good guy someday.

It’s too bad Tinker Bell can’t use her magic to make Smee a tall, dark, and handsome Prince.

LeFou – Beauty and The Beast

LeFou is Gaston’s supportive but silly best friend. No one takes him seriously. He’s very loyal to Gaston and will do anything to stay on his good side.

He has a short, overweight frame with a gap in his front teeth and messy brown hair.

Jumbo is the alien who created Stitch in the film Lilo and Stitch. Most people don’t know about this ugly Disney character because he was modeled after a hippo, which explains his giant arms and legs! When he escapes, he’s sent to earth to find him.

Their names represent their quirks, such as Grumpy, Sneezy, Dopey, Sleepy, Doc, Bashful and Happy. Meet the Seven Dwarfs at Disney World and decide for yourself.

Forky is a toy created from scratch by Bonnie. She put together a spork for his body, popsicle sticks for his legs held on by gum, and red pipe cleaners for his wavy arms.

Forky is unlike all of the other toys. He feels he doesn’t exactly fit in and tries to escape, but Woody won’t let him because he is Bonnie’s new favorite toy. Eventually, he figures out he’s right where he needs to be.

Madusa uses Penny from an orphanage to search for a diamond since the little girls size is small enough to get into small spaces like a cave.

Cruell De Vil is an iconic villain that is very skinny with short half-black and half-white hair. She also is shown smoking often, which is a disgusting habit. Cruella is one of the most hated Disney villains due to her ugly looks and her cruelty to puppies.

Can you think of any other ugly Disney characters or cartoon couples? These characters are the ones that stood out from the rest in a not so glamours way. They didn’t get the looks in their family.

A Disney movie would be nothing without its ugly characters. To see more of your favorite animated characters, then visit our cartoon characters page. Also, check out our best 100 animated movies.

Who is the grumpiest Disney character? 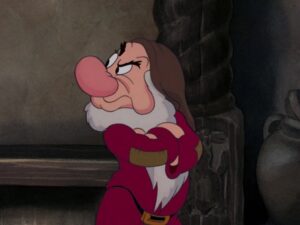 The grumpiest Disney character is Grumpy dwarf from the animated movie Snow White and the Seven Dwarfs. Grumpy lives up to his name and is always grumpy and rude even when others try to cheer him up.