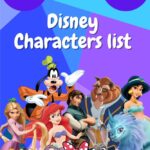 Every Walt Disney Pictures feature film has famous Disney names. These lovable characters have found their way into the hearts of fans from every nation and background.

How many can you name on our list of Disney characters A-Z? Can you name the official 12 Disney Princess list?

Above, are all the letters in the Disney alphabet from A to Z. Each letter has its own page of characters listed in order. Jump around to all the letters to find your favorite Disney character.

Here are some of the best Disney characters around. Enjoy these top 10 Disney names and see how many of your favorites are among the best.

Google searchers have decided! Below are some of the most popular characters searched for on Google worldwide, which clearly indicate the fan-favorite Disney characters. Did your favorites make the list? Find more popular Disney characters by searching the a-z pages above.

Here is a list of some of the most famous boy Disney characters over the past several years. To find more of your favorite characters, just use the a-z list above to jump from letter to letter.

Female Disney characters are surging past their male costars! While the boys are funny and handsome, the girls bring fans and viewers of all ages and backgrounds.

Female Disney characters relate to us, inspire us, make us laugh, and cry with us, then belt out a beautiful song that becomes our childhood anthem. Here is a list of girl Disney names that are among the most popular. Also, find your favorite character with the a-z list above.

For more detailed information and images of the Disney princess names listed above, start at our Disney Princesses page.

There are around 25 main Disney villains female in the Pixar and Disney universe. They range from classic princess film villains like the Evil Queen and Ursula to cute and innocent surprise villains like Assistant Mayor Bellwether and Darla Sherman.

Who is the best Disney animal character, probably an adorable dog and puppy? Each Disney dog is a cute Disney character in its own right a bonus dogs are man’s best friends. These furry friends are the perfect sidekick to our favorite animated characters in any Disney animated film.

Whether they are the sidekick or the star, Disney dogs make the world a better place and make films far more enjoyable. Everyone can relate to the unconditional love of a cute pup, and Disney fans everywhere look forward to more great films with man’s best friends. Here is a list of the top 10 Disney dog names.

A full list of Disney dog names is coming soon. Sign up for our email list to get new movie and article updates delivered straight to your inbox.

Our current list of Disney characters is over 2,100, from A to Z and counting. Only showing you the top 100 Disney characters wouldn’t be fair. Click on a letter in our Disney alphabet above or see our Top 10 Lists below.

As new movies are released, new characters are added to our list. Our goal is to show you all the Disney character names.

You will find your favorite Princesses, villains, furry friends, out-of-this-world characters, and Disney dog names in our complete A to Z list.

Disney movies with The Rock

Rediscover Disney animation films’ most popular Disney character faces and their sidekicks or redhead cartoon characters. Also, included are all the lesser-known characters that often go unnoticed in the background, and characters do not have any speaking lines at all.

[Our list does not include tv shows, live-action movies, shorts, or cameo appearances.]

Another group of very popular characters is the Lore Olympus characters and their mythological modern flare.

For more Disney Cartoon Characters fun, relive the Lady and the Tramp quotes, one of Disney’s classic animated movies, or brush up your memory on the 7 Dwarfs and Mother Gothel.

Who are Disney’s main characters?

How many Disney characters are there?

There are thousands of Disney characters, including over 2,000 animated movie characters.

Who is the most loved Disney character?

Mickey Mouse and Minnie Mouse are the most loved Disney characters and the original inspiration behind the Disney brand. 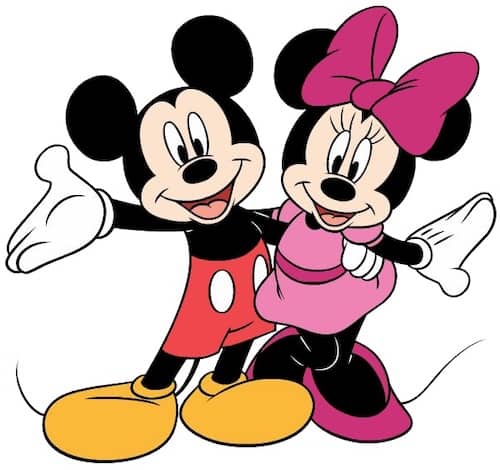 Who are the first Disney characters? 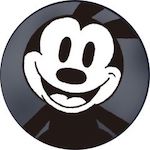 Who is Isabella’s mom in Encanto?

Isabella’s mom is Julieta. She is also the mother of Luisa and Mirabel. Julieta’s gift is healing people of their wounds or sickness with the food she cooks.

Why did Mirabel hug Isabella?

Mirabel wants to hug Isabella because she values and prioritizes the good of the whole family while also completing Bruno’s vision.

Who is the youngest Disney villain?

The youngest Disney villain is likely Hans from Frozen, who is 23 years old.

What is the darkest Disney movie?

The darkest Disney movie is The Hunchback of Notre Dame according to most fans.

What have Disney Princesses taught us?

Disney Princesses have taught us to have courage, be kind, push past your comfort zone, work hard, listen to your heart, and your voice is powerful.

Who is the 1st Disney Princess?

The first Disney Princess is Snow White from the animated film Snow White and the Seven Dwarfs, released in 1937.

How old is Mirabel?

Mirabel is 15 years old and made her debut in the hit film Encanto 2022.

Does Moana have a husband?

Moana does not have a husband. She is an independent woman who takes care of her tribe and island home.

Is Luisa the middle child in Encanto?

Luisa is the middle child in Encanto and has the gift of super strength.

Are Mirable and Isabella sisters?

Isabella is the oldest sister of Luisa and Mirabel.

Who is the first Disney villain?

The Evil Queen from the animated movie Snow White and the Seven Dwarfs is the first Disney villain.