Meet the Frozen characters from Walt Disney Animation Studios Frozen and Frozen II. In these two popular Disney films, two sisters, Elsa and Anna, will change the fate of Arendelle forever. As their sisterhood develops into a strong bond, they will have to overcome their parent’s tragedy, magical powers, and an enchanted forest of four spirits.

See more Disney Frozen videos on YouTube and sing along with Frozen songs and Frozen 2 songs. Enjoy our list of Frozen characters.

Elsa, the Snow Queen, is Arendelle’s magical and larger-than-life former queen. Elsa was born to King Agnarr and Queen Iduna with magical powers of snow and ice. For much of her youth, Elsa stayed hidden away in the castle to keep her powers secret and her family safe. With help from her younger sister Anna, she opens up to her kingdom, which accepts her as she is. Elsa is one of the most popular Frozen characters and the only human with magical powers.

During her childhood, she dressed in navy blue dresses with long-sleeved bodysuits. Still, she later appreciated darker costumes with shades of purple. She also wears white gloves to contain her powers.

Anna, Queen of Arendelle, is the second daughter born to King Agnarr and Queen Iduna. Anna is an optimist who showcases charming humor and sarcasm throughout Frozen and Frozen II, making her relatable. Although Anna has no magical powers like Elsa, she strives to build and maintain a strong bond with her sister, family, and kingdom. When Anna and Elsa investigate the eternal spirits in the enchanted forest, Elsa chooses to stay as the fifth spirit. Elsa abdicates the throne, making Anna the new Arendelle Queen and cementing her as one of the most important characters in the franchise.

She has a round face with freckles, dreamy turquoise eyes, rosy cheeks, and thin lips. She wears sleeveless dresses that expose the freckles on her shoulders. She braids her hair into two pigtails and bangs. When Elsa curses her by accident, her hair turns white with shades of silver but her original hair reverts, thanks to Elsa.

Olaf is a funny and goofy snowman created by Elsa’s magical powers who becomes a close friend of the family. Olaf has a child-like personality full of love and wonder. He is very friendly and has an unusual obsession with all things summer. Olaf is one of the most popular Frozen characters and has his own Youtube series of songs.

Olaf’s physical appearance is a snowman made of three snowball sections. Down the front, he has three pieces of coal, branches for arms, a carrot nose, and three twigs for hair. Olaf often rearranges his body in funny ways to make others laugh. Still, no matter how separated he gets, he can always pull himself back together.

Kristoff is a tough mountain man and ice harvester for Arendelle. He is an adoptive son of trolls Bulda and Cliff. Since trolls raised Kristoff, he doesn’t easily trust humans. Kristoff has always been a loaner with his reindeer friend Sven. When Kristoff meets Anna for the first time, he is blown away by her kindness and beauty. After dating for a few years, Kristoff and Anna develop true love, and he proposes to Anna and becomes her fiancé.

Kristoff’s physical appearance is a strong young man with medium-length blonde hair, fair skin, and freckles. He wears a charcoal-colored tunic with fringes, elf-pointed boots, mittens, and a hat. Throughout the Frozen series, Kristoff appears in several outfits to match the scene’s events.

Sven is a loyal pet reindeer and Kristoff’s best friend. They live with their adoptive family, the trolls, and he helps Kristoff run his ice-harvesting business. He is voiceless and communicates through actions and expressions; Kristoff does voice-overs to help express his thoughts.

He is large, with pale brown fur, brown eyes, clusters of white hair on his back, neck, and hooves, and a lighter brown atop his head. Sven has large antlers and wears a red harness around his body for pulling a sled.

Hans is the prince of the Southern Isles and the main villain in Frozen. He appears noble on the surface, but deep down, he is cold, cruel, and a master manipulator. Hans is a trade partner of Arendelle and the youngest of the thirteen royal siblings of the Southern Isles. He plans to marry Anna’s family and become king of Arrendelle.

Hans’ physical appearance is a handsome man with red hair parted in the middle, sideburns, and lovely green eyes. Hans has a fair skin tone with a freckled face. His typical outfit consists of pants, boots, a tie, a shirt, a vest, and a jacket. Hans always dresses like a wealthy nobleman.

The Duke of Weselton is introduced at Queen Elsa’s coronation event. He has nefarious intentions for the Kingdom of Arendelle and its bounty of riches. The Duke of Weselton carries himself as an integral politician with a surprising fear of magic. Once he discovers Elsa’s magical powers, the Duke labels her a monster and plots against her.

The physical appearance of the Duke of Weselton is a short and thin grandpa. He has slicked-back silver hair and a robust silver mustache. He wears thin round-framed glasses that balance on his oversized nose. He dresses professionally in his blue military uniform adorned with medals and a red sash.

King Agnarr is the former king of Arendelle and the father of Elsa and Anna. He and his wife, Queen Iduna, perish at sea, leaving Princess Elsa in charge of Arendelle. He is a caring father but at the same time stern, which is evident when he orders Elsa to be locked away and later helps her figure out her powers.

He is a tall, red-haired man with fair skin, green eyes, a thin mustache, and a large nose. His complete outfit consists of a military jacket decorated with medals and chains, black plants, and boots.

Queen Iduna is Elsa and Anna’s loving mother. She often sings lullabies to her girls as they giggle and fall asleep in bed, such as All Is Found. Queen Iduna and King Agnarr disappear in a shipwreck, causing Elsa and Anna to continuously search for answers about their parent’s disappearance.

Marshmallow is a massive snow monster created by Elsa’s powers to serve as a guard in Elsa’s palace. He is the big brother of Olaf and the Snowgies. Marshmallow has great strength and can breathe and mimic ice. He is aggressive and territorial and later inherits the ice palace.

Marshmallow is an enormous-sized snowman. Marshmallows’ joints are made of ice, unlike Olaf’s, which are made of sticks. His hands are ice and resemble knives. His eye sockets light up devilishly, ice spikes protrude from his body, and ice fangs grow on his jawline when he is angered.

Snowgies are tiny snowmen that Elsa accidentally makes every time she sneezes. They are full of boundless energy and mischief.

Snowgies are miniature snowmen the size of a baseball with a head, body, and two small snowballs for feet.

Oaken is the owner of Wandering Oaken’s Trading post and Sauna. Oaken runs the day-to-day operations and is a friend of Princess Anna and Olaf.

Oaken’s physical appearance is a wide-bodied and joyful grown man. He has bright blue eyes, red-blonde hair that connects with his bushy sideburns, and a fluffy mustache. He wears decorative sweaters, hats, and suspenders.

Grand Pabbie is the King of Trolls and a shaman. He has magic, can turn into a rock at will, and uses his powers to heal others. He doesn’t like to disclose his age and is described as the same age as the earth.

He has a mane that symbolizes his royalty status and wears a graceful green cloak and yellow crystals. He is the only troll with noticeable eyebrows and hair in his ears that match his mane.

Lieutenant Mattias is one of Arendelle’s loyal guardians. In his defense of the kingdom, he became trapped in the enchanted forest mist for over 30 years.

Lieutenant Mattias’ physical appearance is strong and tall solider, with dark-colored skin. He has a short beard, mustache, and dark hair, with white hair beginning to show.

Yelena is the leader of the Northuldra tribe in the enchanted forest. Yelena is fiercely protective of her people and mindful of outsiders.

Honeymaren is part of the Northuldra tribe. Honeymaren strives for everyone in the enchanted forest to feel peaceful and have the free spirit that she has.

Honeymaren is a young teenage girl with large brown eyes and braided long brown hair. Like other tribe members, she wears a Native American-style buckskin pullover shirt and hat.

Ryder is a fellow Northuldra tribe reindeer-loving teen. Ryder and Kristoff can agree that Reindeers Are Better Than People. Ryder longs for adventure beyond the borders of the enchanted forest.

Ryder is a young teen boy with short brown hair and bright blue eyes. Ryder is taller than Yelena and Honeymaren and wears a Native American-style buckskin-colored pullover shirt.

Frozen 2 Spirits of the Enchanted Forest

The Spirits of the Enchanted Forest are the newest Frozen characters introduced in Frozen 2. There are four spirits, and Elsa becomes the fifth spirit connecting their two worlds.

The Nokk is a mythical water spirit that takes the form of a mustang inspired by Nordic folklore.

Bruni is a curious and quick salamander who represents the spirit of fire. Everywhere he scurries, fire will follow.

Gale is the unseen spirit of the wind. Gale has a wide-ranging and dynamic personality, from a light breeze to a tornado. Gale is often seen when the character’s hair, clothing, and leaves blow around.

Earth Giants are the rocky riverbanks when they sleep. These earth spirits are capable are dramatically changing the landscape.

The Snow Queen is Elsa after the ancient magical Ahtohallan river calls her to take the place of the fifth spirit element and bond the magic between nature and people.

What is the reindeer’s name in Frozen?

The reindeer’s name in Frozen is Sven. He is best friends with Kristoff and also becomes close with the core group of Elsa, Anna, and Olaf.

Is Sven from Frozen a girl?

Sven from Frozen is not a girl. Sven is a fictional character and best friends with Kristoff and Olaf.

What is Elsa’s boyfriend’s name? 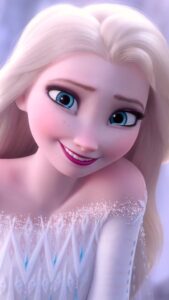 Elsa does not have a boyfriend or love interest in any of the Frozen films.

Who is Anna’s boyfriend’s name?

Anna’s boyfriend is Kristoff. At the end of Frozen II, he finally gets the chance to ask her to marry him, and she says yes.

Is Olaf a boy or a girl?

Olaf is a fictional character who is portrayed as a boy snowman. Olaf is voiced by the talented Josh Gad.