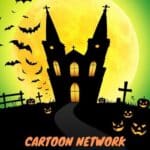 Cartoon Network Halloween movies and shows are some of the best Halloween season traditions for treating yourself and your kids to clean Halloween entertainment!

Here are some spooky and scary movies on Cartoon Network and original series that you can play on your family’s haunted movie night.

Use your favorite television streaming services, such as Hulu kids movies‘ Halloween hub, or Disney’s Hallowstream on Disney Plus, to stream Halloween tv shows.

One of the most loved holiday specials on Cartoon Network is Ed, Edd, and Eddy’s Boo Haw Haw aired in 2005. It’s a humorous horror set of episodes created for the Halloween-themed series. However, you can find some of this on HBO Max movies.

The episode starts with the Eddy’s being frustrated about getting detention on Halloween, but suddenly he remembers the map given to him by his brother. According to the map, it will lead them to a place called Spook-E-Ville, where they can trick-or-treat for candies.

Then, after watching horror movies for a long time, one of the brothers started seeing weird things mistaking everyone as monsters. However, at the end of the episode, it is revealed that the Spook-E-Ville is just a prank pulled by Eddy’s brother.

The Grim Adventures of Billy and Mandy

Another Cartoon Network series worth to binge watch on Halloween night is The Grim Adventure of Billy and Mandy. It’s a series about two kids exploring their accidental friendship with the Grim Reaper.

Their adventure starts when the Grim Reaper loses on his bet to Billy and Mandy. They use the reaper’s power to explore the underworld, a home for monsters and scary creatures.

If you don’t want to watch the whole series, you can opt to watch the Halloween special episode of this series titled Billy and Mandy’s Jacked-Up Halloween.’ It’s part of the season 2 episodes of the series.

In this Halloween special, Billy and Mandy were trick or treating with the grim reaper when he started telling the story of Jack o’ Lantern. Then, Jack appeared in front of Bill, who was dressed as a grim reaper and stole the Grim’s scythe.

And that’s when the adventure of these children becomes interesting.

You might have watched this next series when you are still young, and it’s time to share the adventure of Courage the Cowardly Dog with your kids.

It might be an old cartoon network series, but there’s a big chance that your kids will love it, especially on your Halloween movie night.

If you haven’t watched this series before, the story of Courage the Cowardly Dog is about a pink dog who lives with a grumpy old lady. Despite his name, he is known to be constantly afraid, which makes his adventure funny.

However, they are also constantly attacked by monstrous creatures, aliens, and bizarre incidents, making the series perfect for Halloween!

Courage, the Cowardly Dog is a four-season series that you can watch on HBO Max or purchase its DVD version.

Scooby-Doo is another all-time favorite cartoon network series that you shouldn’t forget to include in your Halloween movie night. It has the best Halloween specials that your kids will surely love for a fun and spooky Halloween.

Scooby-Doo is a story about this adventure-seeking group of friends and their large dog, Scooby. They usually solve mysteries and encounter monsters, zombies, ghosts, and other creatures along their journeys.

Here’s a list of the Scooby-Doo Halloween specials to re-watch:

If your kids love Adventure Time, they need to watch the spooky special episode of the series. The Slumber Party Panic is the first episode of Adventure Time, where Princess Bubblegum and Finn need to save their Kingdom from Zombies.

The Princess accidentally summoned the candy zombies while doing a science experiment. However, the experiment failed, and instead of bringing the dead candy citizens back to life, they made them into candy zombies.

Their haunted house adventure takes off as they now need to save the Kingdom from the zombies without letting the Candy people know about the incident.

The Amazing World of Gumball

The Amazing World of Gumball is another cartoon filled with episodes dedicated to getting you and your kids some goosebumps on Halloween. It’s about the adventure of a cute blue cat named Gumball with his friend Darwin and his pet goldfish, who has grown some legs.

The series mostly has funny and thrilling episodes, but special dramatic Halloween episodes are spooky and worth watching on Halloween. Below is the list of the Halloween special episodes of The Amazing World of Gumball to re-watch:

There will always be space in our hearts for these cartoons’ cute, spooky adventures, regardless of age. So, let your inner child manifest on Halloween and set your home theater ready for a spooky night to remember.

Even if your Halloween party is still far, you can start binge-watching these series with your kids.

Although Cartoon Network aired most of these cartoons on the list long ago, they are still worth watching. The plot, characters, and scripts are just ideal for a family movie night.

Moreover, you can’t go wrong with these famous cartoons that have stood the test of time and are still popular nowadays, even if there are plenty of new cartoons. They can still capture the heart of every child and child at heart.

After watching all your favorite Halloween movies and episodes on Cartoon Network, flip over to Disney+ to continue your Halloween content marathon with Disney channel Halloween episodes and movies.

Visit our Disney Plus Halloween movies page for a complete list of Disney channel Halloween spooky specials and movies. You can also spot your favorite Halloween Characters on our new post. Do you recognize all 58?