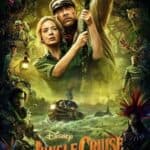 Jungle Cruise, Moana, Race to Witch Mountain, and The Game plan are all Disney movies with The Rock. Dwayne Johnson also provided the voice talent in the animated movie Area 51 by Sony Animation.

Dwayne “The Rock” Johnson is beloved by fans of all ages for his diverse roles in films and voiceovers in animated movies. The Rock has played an action role, role model and leader role, demi-god role, and more.

New Disney movies with The Rock include Jungle Cruise. Based on Disneyland’s theme park ride where a small riverboat takes a group of travelers through a jungle filled with dangerous animals and reptiles but with a supernatural element.

In Ancient Polynesia, when a terrible curse incurred by the Demigod Maui reaches Moana’s island, she answers the Ocean’s call to seek out the Demigod to set things right.

When you use a bird to write with, it’s called tweeting. [Using Heihei’s beak to sign Moana’s oar].

Hey! What has two thumbs and pulled up the sky, when you were waddling ye high? This guy! When the nights got cold, who stole your fire from down below? You’re looking at him, yo! Oh! Also, I lassoed the sun. You’re welcome. To stretch your days and bring you fun. Also, I harnessed the breeze. You’re welcome! To fill your sails and shake your trees!

A Las Vegas cabbie enlists the help of a UFO expert to protect two siblings with paranormal powers from the clutches of an organization that wants to use the kids for their nefarious plans.

Just remember that me and Alex, we’re only a… a wormhole away.

You looked better with the helmet!

An NFL quarterback living the bachelor lifestyle discovers that he has an 8-year-old daughter from a previous relationship.

I have an answer to your question, P. Win or lose today, you’re the best thing that’s ever happened to me.

You don’t get abs like these eating peanut butter patties.

There will likely be another Disney movie with Dwayne The Rock Johnson in the next few years. For more Disney fun, check out our Disney Characters List, Disney Movies home page, and new animated movies. For more movies with the Rock visit IMDb.

What Disney movies has The Rock been in?

What new movie has The Rock in it?