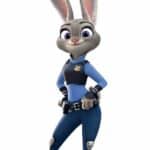 Judy Hopps is the newest police officer in the big city of Zootopia. Judy achieved her lofty dream of becoming the first bunny cop of the Zootopia Police Department at age 24 but becoming a cop was only the first of many challenges.

Judy’s determination and positive thinking are a refreshing outlook in a city on the brink of a collapsing understanding and peace among traditional predators and prey.

Judy Hopps is from the small rural community of Bunnyburrow, far from the city of Zootpia, which has several habitat neighborhoods. In a school play, Judy reveals that her dream is to be the first bunny cop in the city of Zootopia, where anyone can be anything.

Bonnie and Stu Hopps, Judy’s parents, encourage her to follow in their footsteps as carrot farmers, which is a safe job and not a risky city job chasing criminals.

Later at Bunnyburrow farm fair, Judy intervenes and defends her fellow prey friends from a predator fox named Gideon Grey. Gideon swipes at Judy and scratches her cheek while knocking her down.

Attempting to make fun of Judy, Gideon yells at her expressing that she will never be anything more than just a dumb bunny. This life-altering interaction only emboldens Judy to double down and follow her dreams of becoming a cop to stop wrongdoing and do what is right.

Soon, Judy is grown and off to the city to join the police academy. After some setbacks, Judy can overcome her challenges and is accepted as the first rabbit to join the Zootopia Police force by Mayor Lionheart and his assistant Dawn Bellwether. At the Police headquarters, Chief Bogo first assigns Zootopia Judy as a meter maid before giving her a case to solve, finding Mr. Otterton.

Judy Hopps has a fearless, determined, and optimistic personality that passes off to those around her. Judy starred in the school play from a young age, which shows that she is not afraid of being on center stage if it means sending the right message.

Throughout the film, Judy perseveres and follows her dreams with great determination, first accomplishing her goal of becoming the first bunny cop in Zootopia to solve her first big case.

Nothing is ever handed to Judy Zootopia, and she shows many examples of working hard even after being told “no” she’s too small, she is prey, and she doesn’t fit the stereotype of a hero.

When Judy isn’t fighting crime or stereotypes, she shows her softer side of active listening and empathizing with those victimized.

Judy also shows characteristics of trusting others, such as Nick Wilde, a fox, and seeing other characters’ true potential no matter how big or small.

Her wits and creativity often give her the upper hand when tracking down her foes and solving her case, making her one of the most well-rounded characters in Zootopia.

Judy Hopps has a short and slender appearance, long rounded-off ears with black tips, small hands, large feet, and a rounded face. Judy has big round purple eyes and a small pink nose.

Officer Judy Hopps is often shown in her Zootopia Police uniform composed of navy blue pants with knee pads, a light blue long-sleeve shirt, a navy vest with a gold badge, and navy-colored gloves covering her palms and wrists.

Judy’s large ears often express her emotions by being tall and straight when she is happy, flat and down when she is scared, or flat and horizontal when sprinting.

Zootopia Judy Hopps has many strengths and abilities one might associate with a bunny. She uses all of them and more to their full potential, such as her speed, hearing, adaptiveness, smarts, and emotional intelligence.

Judy is small compared to many other animals in Zootopia, but she is the fastest and most athletic. She uses her quickness to chase, jump, hide from villains, and pursue justice.

Showing her empathy and emotional intelligence helps Judy connect to the other animals of Zootopia and uncover clues by listening and showing that she cares.

Throughout the film, Judy’s smarts and adaptiveness are also shown. Although she appears gullible at times due to her kindness toward others, she is quick to learn and change her police tactics.

Her adaptiveness is evident as her relationship with Nick Wilde grows from being tricked by Nick, holding him accountable, teaming up, and eventually developing a trusting friendship.

“Oh. Then, I guess I’ll have to be the first one. Because I am gonna make the world a better place!”

“Well, he was right about one thing: I don’t know when to quit!”

“Yeeaah… two hundred dollars a day, three hundred and sixty-five days a year since you were twelve, that’s two decades, so times twenty which is… one million four hundred sixty thousand – I think. I mean, I am just a dumb bunny, but we are good at multiplying.”

“What was it you said? ‘Any moron can run a plate’? Gosh, if only there were a moron around who were up to the task.”

“It may be impossible to small minds… I’m looking at you, Gideon Grey.”

“Hurry! We got to beat the rush hour…it is night!”

“I was ignorant and irresponsible and small-minded. But predators shouldn’t suffer because of my mistakes. I have to fix this.”

“Try to make the world a better place. Look inside yourself and recognize that change starts with you.”

“Life’s a little bit more complicated than a slogan on a bumper sticker. Real life is messy.”

“Real life is messy. We all have limitations, we all make mistakes, which means, hey, glass half full, we all have a lot in common. And the more we try to understand one another, the more exceptional each of us will be. But we have to try.”

“So no matter what type of animal you are; from the biggest elephant, to our first fox, I implore you: Try. Try to make the world a better place.”

“No one tells me what I can and can’t be! Especially not some jerk who never had the guts to try to be anything more than a pawpsicle hustler!”

“No, I am a cop. And I’m on the Emmitt Otterton case, and my evidence puts him in your car! So intimidate me all you want. I’m gonna find out what you did to that otter if it’s the last thing I do.”

“With all due respect, sir, a good cop is supposed to serve and protect – help the city. Not tear it apart.”

“Coming through, this is Officer Hopps, and I am in pursuit! Woot woot!”

“The thing is, you don’t need a warrant if you have probable cause, and I’m pretty sure I saw a shifty lowlife climbing the fence. So you’re helping plenty. Come on.”

View more fun facts about Judy Hopps here on Behind the Voice Actors and find more animation characters and Disney character names from your favorite Disney and Pixar movies.