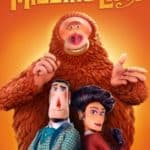 Missing Link launches an adventure as Mr. Link recruits explorer Sir Lionel Frost to help find his long-lost relatives in the fabled valley of Shangri-La. Along with adventurer Adelina Fortnight, this trio of explorers travels the world to help their new friends.

I, uh, wanted to say thank you. For what you said back there.
Don’t mention it.

Push your messaging game to epic proportions with these 22 new Missing Link stickers for iMessage! Add Mr. Link, Sir Lionel, Adelina Fortnight, and other new characters to your messages and photos. Download for Apple.

Missing Link begins by following Sir Lionel Frost and his assistant on a daring adventure to capture evidence of the fabled Nessie. Frost plays the bagpipes to get the monster’s attention.

Nessie surfaces proving its existence and Frost tries to take a photo but not before his assistant ends up in Nessies mouth and swims away.

Frost dives in after the beast and reins in the wild creature with a long rope conveniently landing the two of them safely back in their boat. Nessie gives them a tail slap and sends them back to shore.

At his office, Frost tries to calm his assistant who is over-stressed from being almost eaten alive. With a lack of sympathy for his near-death experience and feeling under-appreciated his assistant quits and storms out.

Frost plops down on a sofa and a tall pile of letters falls on him. One letter sticks to him as he stands up which he opens. The letter promises to reveal to him the elusive Sasquatch.

Potentially bringing him fame and respect among a group of elite club members he admires, Frost challenges his local bigwig high society club leader to a challenge he can’t refuse.

If Frost finds the missing link (or Sasquatch) and can prove its existence he will become a club member and be known as one of the greatest explorers of his time.

To prevent a successful trip by Frost, the club president hires a thug named Stenk to hunt him down.

Frost sets out on his own without a partner this time and ends up outside a small town in the Pacific Northwest. After following the directions in his letter he comes to a half-built cabin in the woods. All of a sudden there is movement in the forest and his horse is spooked.

Frost sees something move and chases the moving object until they come to a clearing further into the woods. Frost sees a large creature that resembles a tall bear standing on two legs. The wind blows and the letter in Frost’s hand spirals in the wind and the creature snatches it out of the air.

Introductions begin after some comic relief and the two realize they have been seeking one another. The Sasquatch invites Frost to his den and reveals how well-spoken and well-read he is especially about Frost’s adventures.

Frost gives him a name, Mr. Link since he believes this creature is the missing link in our society’s understanding of evolution.

Frost and Mr. Link forfeit their true intentions. Mr. Link expresses his loneliness and longing to reach out to his distant cousins, the rumored Yeti in the Himalayas. Frost shares his need to prove Mr. Link is real so he can win his wager and be remembered as a great explorer.

The two agree to seek out the Yetis existence and valley of Shangri-La for Mr. Link’s long-lost relatives. Then Mr. Link will give Frost the proof he needs to prove the Sasquatch’s existence and claim his fame.

Before leaving the Pacific Northwest the two attempt to stop for a night’s rest at the small town Inn nearby. Attempting to wear a blanket as a disguise the town folk easily see he’s not like them.

Stenk, the hired thug that is hunting down Frost walks in with his crew and pulls a gun on him. A bar fight ensues and the two sides trade punches and knockdowns. The duo makes a narrow escape deciding it’s not safe to stay the night. Their journey begins but first they need a map.

Frost and Mr. Link set out on their journey first stopping at Adelina Fortnight’s house to get a map to Shangri-La. Frost and Adelina have a muddled past. They hint at a previous love interest before she married Frost’s best friend and who later passed away.

The widowed Adelina keeps the map hidden in a safe at her home and isn’t very welcoming of Frost and Mr. Link when they arrive.

Sensing Frost’s alternative motives and selfishness she denies Frost the map and forces him out of the house. After dark Mr. Link and Frost attempt to jump the wall surrounding the property and Mr. Link falls through the wall instead and eventually they gain easy access to the room with the safe.

The safe is heavy and Mr. Link gets caught dragging the safe across the floor by Adelina who calls him and Frost terrible thieves. The safe accidentally gets launched out of the window by gunfire and they jump out the window to grab the map and run.

Furious, Adelina tracks the duo down at the train station in their disguises and threatens them at gunpoint. At the opposite end of the train platform, Stenk reappears and fires first. The three take cover and while hiding they agree to go on the adventure together.

While the gun battle rages on Frost shouts that they should get on the train as it is leaving the station. They successfully trick Stenk into jumping on the train while they stay behind and take a longer route by wagon cross country leaving Stenk in the dust.

After a long wagon ride across the country, the trio gets on a large ship headed for London. Frost and Adelina share a peace offering and she challenges him to talk with Mr. Link.

In the background, Stenk overhears their discussion and once again tries to foil their plans. Stenk chases Frost all over the ship while Susan rescues Adelina who fell overboard but managed to cling onto the side before falling into the water.

The trio escapes on a lifeboat and is able to row to shore out of the reach of Stenk’s evil intentions. Then they make their way through India on the back of an elephant. Frost and Adelina lean in for a kiss just as a tree branch knocks Frost backward into the arms of Susan who is sleeping.

As they get closer to Shangri-La they travel up the Himalayas to a local’s house named Gamu, who can tell them the way up the mountain trail.

While at Gamu’s house they try a Yak stew and come to find out the people in the region use every part of the Yak for various needs the people have. During their dinner, Susan reveals he’s the distant cousin of the Yetis they seek deep in the mountains.

Gamu faints but when she wakes she tells her daughter the route to take through the mountains. They all make their way up the mountain trail. Once they get to the base of a large snowy mountain cliff the daughter leaves them behind as the trio begins their last accent.

Back at Gamu’s house, Stenk and the club leader have caught up with the explorers and threaten Gamu’s grandson if she does not tell them the way through the mountains as she told the trio of adventurers.

Back in the mountain snow, Susan sees a large footprint in the snow similar to his. After a long journey, this inspires Susan and he takes off following the large footprints dragging Frost and Adeline in tow.

They run up to a large Yeti in the snow and instead of a warm welcome they get captured and taken to the Yeti temple.

At the Yeti temple, they are taken in front of the Elder in charge. They explain their true purpose of why they came, which is to help Susan find his long-lost cousins.

The Elder takes them to the back of the temple and shows them an unspoiled oasis far below which is Shangri-La.

The Elder then explains they do not want Susan to be part of their family and they refuse to let the humans go back home and share with others that they discovered Shangri-La.

The Yetis submit the trio to an inescapable ice pit. With no escape in sight, the three face their inner fears. Frost rallies the group with his enthusiasm and positive attitude.

Susan tries to throw Frost out of the ice pit but he does make it and hits the wall. Susan then throws out the smaller Adelina who then quickly devises a plan to get all of them out of the pit.

The trio stumbles through the temple making a lot of noise and a chase breaks out. Susan accidentally knocks over a fire pit stand that causes the floor to become slick. The Yeti chase the trio out of the temple and stumble after them down the stairs.

They run for their escape across the ice bride all tied together at the waist by a rope and are met by Stenk and the club leader who is blocking their way.

The two groups have a showdown of words and colorful speeches expressing what theyâ€™ve learned about themselves on their adventure and their united front as friends.

Out of anger, the club president starts picking at the ice to break the bridge yelling that Frost’s name will never be remembered.

The bridge begins to crumble and most of the two sides are able to run and jump to the bridge’s edge to cling by their fingertips. The club leader and his minuteman are not able to make it and presumably fall to their death.

The trio and Stenk are holding on to an ice pick handle on the cliff’s edge, each dangling off the edge hanging to one another for dear life. As the ice cracks and death is looming Susan manages to continue climbing up large icicles.

One begins to break off and Susan is able to jump up to the next section but the broken piece falls and spears Stenk sending him to the bottom of the valley.

Susan pulls Adelina and Frost to safety and they say goodbye to his distant cousins.

Due to their successful adventure and grown friendship, Frost asks Susan to be his assistant. Susan gladly accepts, now feeling like part of the family.

Adelina says her goodbyes and announces her own adventure awaits.

In the final scenes, Frost gets a new clue about a Fiji Mermaid which will lead him and Susan on their next adventure.

The movie ends by zooming in on a black and white photo of the two new friends and Do-Dilly-Do (A Friend Like You) plays as the credits roll.