Mighty Mouse is an animated superhero mouse. He is a little mouse character that can fly and has super strength inspired by Super Man’s powers. Terrytoons created Mighty Mouse for 20th Century Fox in the early 1940s and produced over 80 short films.

He was initially called a Super Mouse cartoon but was later changed to Mighty Mouse after seven episodes when the creators found another comic book character called Super Mouse.

The character also changed costumes as the mouse switched from a red outfit with blue pants to wearing a yellow outfit and a red cape, along with the name change. His powers include incredible strength, the ability to fly, and invulnerability.

The theme song by Marshall Barer was perhaps the most popular thing about the shorts. Years after the character no longer appear on the big and small screen, its theme song is still used on various shows.

The Mighty Mouse cartoon lasted from the 1940s until the late 1980s. He went up against numerous villains, primarily cats. Despite having several adversaries, none of them came close to putting him down.

Perhaps, the villain who came somewhat close to putting up his unbeatable powers would be Pinhead. There were also a few times when humans became the main villain.

In the 1960s, the cartoon became a Saturday morning feature thanks to Terry Toons. Undoubtedly, the character is their most popular, and they did not waste any time showcasing it to a desirable time slot.

Mighty Mouse animation teamed up for a year with other Terry Toons characters Heckle & Jeckle, Quackula, and Swifty. The group appeared in 80 cartoons starring one of the four.

Believe it or not, the most memorable episode for this series was the episode titled Zeroes and Heroes, where Mighty mouse teamed up with a superhero group called the Mighty Heroes.

The story saw them more washed up than usual, then Mighty Mouse teams up with them to fight a nasty villain. Unfortunately, this was the last we would see the cartoon on the small screen.

A few years later, we saw the superhero appearing in comic books. In the movie Curbside, Mighty Mouse made a brief cameo appearance. The series was only ten issues.

It was his last appearance on the big screen as new cartoon characters kept popping up.

Mighty Mouse has a calm and straightforward personality with characteristics that show he is mature beyond his years. He always tries to do the right thing and lets his heroics talk for him.

He is soft-spoken and sometimes says, “Here I come to save the day,” when he flies into action. He also shows how he can be shy and nervous. He blushes bright red when saving a young female mouse and receiving a kiss on the cheek.

Might House is a brown mouse who initially wears a red outfit with blue pants, similar to Super Man. After seven episodes, when his name officially changed to Mighty Mouse, his costume also changed.

Mighty Mouse’s official uniform is a yellow outfit with red pants, red boots, and a red cape. He wears white gloves and does not have a superhero logo on his chest like many characters in animation and comics.

Might Mouse shows his super strength, speed, flying ability, invulnerability, and X-ray vision. He has shown that he can shoot lightning bolts from his hands when attacking during flight.

Might Mouse even displays the ability to control lifeless objects and turn back time in a few episodes.

“Here I come to save the day!”

“Hi, boys and girls. Here we go rocketing into a fun-filled, exciting cartoon show. Hold onto your seats as we blast off to visit all your favorite cartoon stars.”

“You are my sweetheart. Together forever.”

Mighty Mouse is a classic superhero cartoon that many fans remember watching on Saturday morning cartoons. You can find out some more about Mighty Mouse on Youtube.

What was Mighty Mouse’s catchphrase?

When Mighty Mouse springs into action, he says, “Here I come to save the day!“

How did Mighty Mouse become mighty?

Might Mouse becomes mighty by eating all his vitamin A through Z. 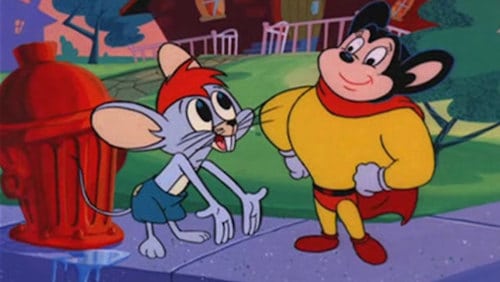 Why was Mighty Mouse canceled?

Parents became concerned that Might Mouse could possibly encourage children to sniff other harmful substances besides vitamins. The tug of war between CBS and parent groups left a stain on the show, and it was eventually canceled halfway through season 2. 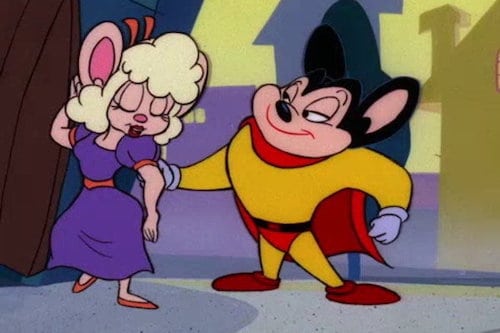 What was Mighty Mouse’s weakness?

Mighty Mouse was given Limburger cheese when he came to Earth. Something mysterious happened to the cheese, which caused Might Mouse to become weak. 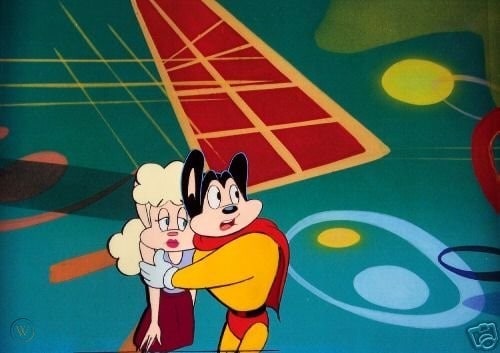