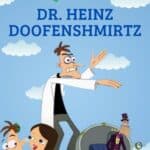 Heinz Doofenshmirtz is the main villain of Phineas and Ferb, Disney Channel’s well-loved musical comedy that ran from 2007 to 2015. He is an evil scientist and goes by many names, such as Dr. Doofenshmirtz, Doof, Dr. D, Slouchy, Heinz the Ocelot, and Professor time.

Fans loved tuning in to watch the famous characters’ adventures every week. Stories featuring their pet platypus, Perry, transforming into his alter-ego Agent P and facing off against Dr Doofenshmirtz (reliably thwarting his evil plans each time) was one of the best parts of the show.

Along with Doofenshmirtz’s creative inventions, he also seems to enjoy singing. His musical numbers are usually about what is troubling him at the moment, such as how he hates his brother and impressing his professor. Dan Povenmire and Jeff Gunn voice Dr. Heinz Doffenshmirtz.

Heinz was born in the village of Gimmelshtump, Drusselstein, a fictional place based primarily on German and Austrian traits. He had abusive parents and an awful childhood, shown in the show with flashbacks to incidents like his parents forcing him to pose as a lawn gnome.

According to Heinz, his parents were so bad that they somehow defied all logic and didn’t show up for his birth. At one point, they disowned him, and a family of ocelots partially raised him.

His childhood was difficult because his parents showed blatant favoritism toward his brother, Roger. The impact of this vastly different treatment is shown in Roger growing up to be the mayor of Danville compared to his brother’s failed evil scheming.

His social life as a child was not good either, with him facing school bullies and a mostly friendless existence. His best friend was a painted balloon, aptly named Balloony. Even Balloony did not stay with him forever; it floated away, with Heinz’s father preventing him from catching it.

As a child, Doofenshmirtz also began discovering his love for science. He built significant inventions at back-to-back school science fairs that were lost to a baking soda volcano twice, and the mad scientist as we now know him was born.

After his parents tricked him into moving to America, Heinz briefly considered taking over the world as a life goal. His girlfriend then, Linda, who grew up to be Phineas and Candace’s mother and Ferb’s stepmother, gave him the idea to focus on conquering the Tri-State Area.

Before devoting his life to evil, he briefly owned a bratwurst stand. Like most of the other things Doofenshmirtz tried, this ultimately failed. Hot dog stands proved far more popular, and he went out of business due to a lack of sales.

Dr. Doofenshmirtz is not technically a doctor at all. He attended Evil School but was denied his doctorate after failing Evil 101 because his teacher, Dr. Gevaarlijk, disliked him.

Heinz carried resentment over this well into his adulthood, desiring to prove to her that he was genuinely evil no matter what she’d told him when he was in her class. Following this, he purchased his doctorate online.

Heinz thinks of himself as ugly. He is often hunched over with short brown messy hair, a long pointy nose, dark blue eyes, and no facial hair. He is a tall, 6’2″ skinny guy wearing a thin white lab coat, a black turtleneck sweater, green pants, and black shoes. Doofenshmirtz has a tattoo of the word “Evil” on his bicep. In the 2nd dimension, he considers himself handsome.

Heinz married a woman named Charlene at one point and eventually had a daughter named Vanessa with her. The marriage ultimately did not work out, due at least in part to Heinz’s puppet, Mr. Tomato, and Charlene’s dislike of him.

Charlene is primarily civil and friendly with Heinz, if a bit sarcastic, despite their relationship not working out. Charlene’s alimony checks are the central funding for the doctor’s lifestyle, including his constant failed inventions.

Dr. Doofenshmirtz shows a softer side of himself with his daughter. Vanessa is portrayed as a teenager during the run of Phineas and Ferb, roughly the same age as Candace.

He always tries to give her great birthdays, although usually, he is not successful. He almost threw a great party for Vanessa’s 16th birthday but instead used the party as a cover to attack Perry.

Vanessa often tries to prove her father’s evilness to her mother, who doesn’t believe her. This gag mirrors Candace constantly trying to bust her brothers, which the show acknowledges.

Despite her obsession with catching her dad, Vanessa is a lot like Dr. Doofenshmirtz in some ways, which makes him very happy. She snatches a doll away from a small child.

She threatens Agent P and Major Monogram with a hairdryer to help her father escape arrest, mirroring her father’s affection for misbehaving.

Doofenshmirtz also dated a few other characters in the series, including Linda Flynn, Elizabeth, and a last date at the Chez Platypus.

Dating Linda didn’t go well. Heinz made fun of her when she told him her dreams of becoming a professional musician. Doofenshmirtz joked he had just as good of a chance of taking over the world as her making it as a musician.

Linda snapped back that he could start with the Tri-State area. Stuffing Linda in the trunk on the way to a drive-in theater wasn’t a good dating movie for Heinz.

Doofenshmirtz also had a short-lived relationship with Elizabeth. It turns out that Elizabeth is obsessed with whales. Being a nice guy, Heinz created an invention to communicate with her beloved whales, and when she did, the whale told her to leave him.

One of Doofenshmirtz’s last dates was at the Chez Platypus restaurant. The date went well because they both had something in common they didn’t disclose on their dating profiles; they were both evil characters.

They quickly fall in love and have a beautiful montage about their budding evil romance. Later, their love is zapped when Doofenshmirtz’s new invention, the De-love-inator, crashes next to her and electric shocks her into not loving anything anymore.

Dr. Doofenshmirtz is constantly making evil inventions, which almost always eventually fail. These ‘inators’ (called that as he names them all with the suffix -inator) are usually destroyed by his nemesis Perry, but sometimes simply due to Heinz’s ineptitude.

In nearly every episode of the show, his inventions are somehow the reason Candace Flynn fails to bust Phineas and Ferb to their mother. His inventions are almost all in service of his ultimate goal, taking over the Tri-State Area in which the show is set.

He owns and operates Doofenshmirtz Evil Incorporated, located in an office building that serves as Heinz’s home and has a few apartment units. His only consistent employee is his robot assistant, Norm, who Doofenshmirtz built and invented himself.

Perry the Platypus is a secret agent. He is Phineas and Ferb’s pet, and Doofenshmirtz’s arch-nemesis as his alter ego Agent P. Perry works for OWCA, or the Organization Without a Cool Acronym, which employs animals as secret agents.

In the “Last Day of Summer” episode Doofenshmirtz is identified as the OWCA public enemy number 3. Agent P is assigned to foil Doofenshmirtz at every turn and is quite successful at his job.

The typical format of the interactions between Perry and Doofenshmirtz goes as follows: Heinz comes up with an evil scheme and builds an invention to help him with it. Perry is informed by his boss, Major Monogram, that Doofenshmirtz is up to something and finds out what it is.

Upon reaching Heinz’s location, Perry is caught in a trap. Doofenshmirtz monologues about his evil plan and how he plans to accomplish it, and when he reaches the end, Perry somehow escapes the trap and stops him.

Usually, the -inator (invention) involved in the scheme only succeeds in destroying the contraption Phineas and Ferb Fletcher have built that episode just before Candace can reveal it to their mother. Doofenshmirtz yells, “Curse you, Perry the Platypus!” Perry leaves.

Despite Perry’s constant disruption of the doctor’s plans, their relationship is not simply that of nemeses. Doofenshmirtz even declares Perry one of his best friends in one episode.

They are codependent and don’t know how to function unless they’re competing. Both of them fall into a depression when Doofenshmirtz is briefly assigned a different agent by OWCA. Perry also prevents Doofenshmirtz from coming to any serious physical harm and saves him when he’s in actual peril.

The show sometimes breaks from its usual format and shows Doofenshmirtz briefly succeeding in his schemes.

In the first movie, Doofenshmirtz’s Otherdimension-Inator sets off the film’s events. His Pick ‘Em Up-Inator is another successful invention he made to bring Vanessa home after school.

He can also steal the keys to Danville using the Key-Find-Inator despite Perry’s best efforts to stop him. He even moves the earth further from the sun at one point, altering the normal progression of the earth’s seasons with disastrous results.

The resulting unrest in Danville creates an opening for Doofenshmirtz and other villains he’s associated with to take over the City Hall building for a time.

Heinz even succeeds in achieving his ultimate life goal, albeit temporarily. He becomes governor of the Tri-State Area, creates a governor’s mansion for himself, and builds a Do-Over-Inator that allows him to rewind time repeatedly, giving him an advantage over Perry.

Knowing his next move each time Perry attempts to defeat him, Heinz can achieve a final and decisive victory. Ultimately it’s his relationship with his daughter that would undo this plan.

The doctor makes an invention to reset things to how they were for her sake; Vanessa’s pursuit of an internship at OWCA was impossible while he was in the governor role, so he gives up everything he had achieved to make her happy. Eventually, Doofenshmirtz gives up evil and vows to devote his life to good.

Milo Murphy’s Law is another Walt Disney XD channel series that ran from 2016 to 2019 and revolves around Milo Murphy, a descendant of Edward Murphy, the engineer who coined Murphy’s Law: “Anything which can go wrong, will go wrong.”

Dr. Doofenshmirtz joins the cast after destroying his building, leaving him to crash on Milo’s couch. He is revealed to be the past identity of Professor Time, destined to invent time travel and save the world.

In the meantime, he tries to devote his life to good, though he still has a penchant for making -inators (which usually cause chaos just as they did in Phineas and Ferb, though now unintentionally).

He even has a super-hero alter-ego, Do-Gooder Doof, where he tries to help people assisted by Perry the Platypus as his sidekick.

Doofenshmirtz talks a big game about his evil plans which are always foiled by special agent Perry. He is also shown with a nice side toward his daughter Vanessa and his arch-nemesis Perry at times. 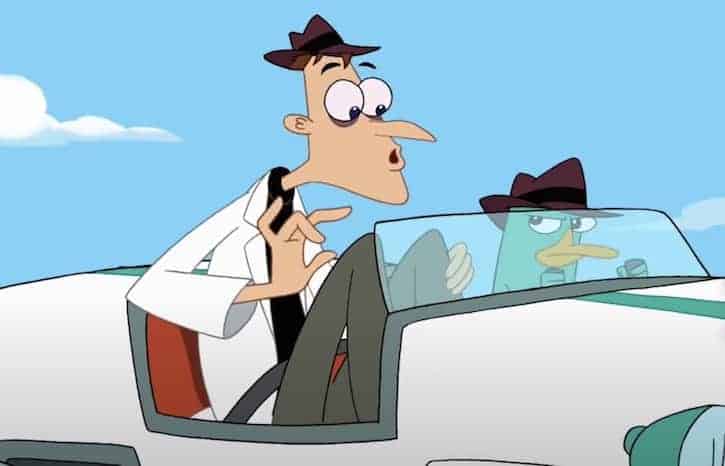 Does Dr. Doofenshmirtz have a PHD?

Dr. Heinz Doofenshmirtz went to college for his undergraduate degree and later purchased a fake PHD. 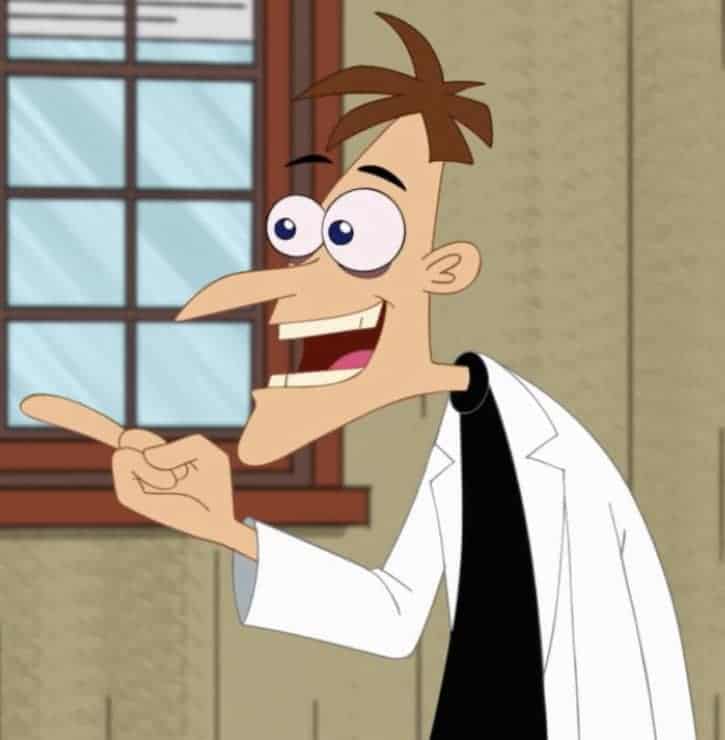 What does Doofenshmirtz mean in German? 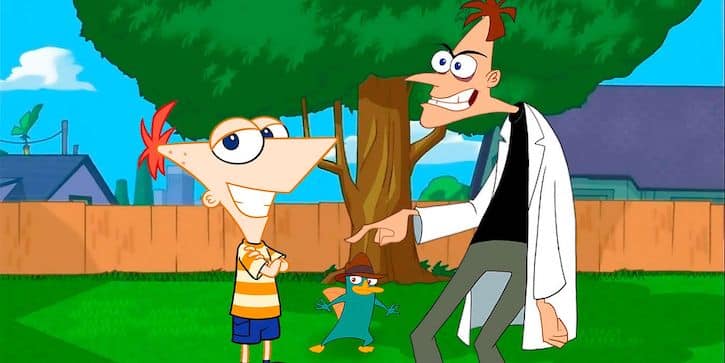