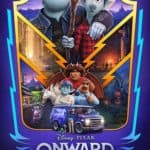 This Onward review begins with a family quest that delights, Boom Bastia, and pulls at your heartstrings along the unpredictable Path of Peril with mythical creatures.

There is a delicate balance between tear-jerking moments and comic relief that Pixar and Disney have been known to master throughout many of their films.

If you can look past the Pixar movie and Disney blueprint of the missing family member tragedy you’ll find many successful attempts to modernize the film to relate to many ages and families.

In a suburban fantasy town, New Mushroomton, which was once full of wonder and magic, two brothers Ian Lightfoot and Barley Lightfoot receive a gift from their dead dad to celebrate Ian’s 16th birthday.

The two have a comradery that builds the foundation for the film and a friendly sibling bond with ups and downs that many will be able to relate to.

Ian is the star and although he doesn’t appear to have any interest in magical powers, at the beginning of the film he quickly develops an interest.

When his father gifts him and his brother a wizard staff, Ian discovers he has the family’s magic touch. He feels a responsibility to bring his father back and make his spell-spoken older brother, Barley, proud.

Older brother Barley is the free spirit of the bunch that embraces the wonder the fantasy world offers and is fascinated with real magic spells and his role-playing game Quests of Yore.

Barley is a risk-taker type that goes for it all while timid Ian tags along.

Both boys possess half of the needed characteristics of their dead father to bring him back. Ian possesses the tactical ability with the magical staff and Barley possesses the magic charm and knowledge of spells (similar to Harry Potter).

With both of their efforts combined, and a dash of hope, their quest is layered with suspense and comedy most movie fans will appreciate.

Laurel, the boys’ mother, also shines at moments when she is introduced at the beginning of the film but fades in and out during the quest and doesn’t get the opportunity she deserves to be more involved in the story.

Along with Laurel, her quest sidekick The Manticore (Corey), also falls by the wayside and is sadly left out of the majority of the film with only a quick attempt at the finale to play her part in the conclusion.

For director Dan Scanlon this story hits close to home. Previously directing and helping write another Pixar animation studio hit, Monsters University, Scanlon drew from his own life experience of losing his father to influence the making of Onward.

Scanlon has also served as a member of the senior creative team and senior leadership team on six other Pixar smash hits including Toy Story 4, Incredibles 2, Coco, Inside Out, Brave, and Cars.

While enjoying the film some cast voices may jump out at you like Tom Holland, Chris Pratt, Julia Louis-Dreyfus, Mel Rodriguez, and Octavia Spencer who perform wonderfully the elf brothers, mother Laurel, Colt, and Manticore voices.

Lena Waithe also voices Officer Spector who is Pixar’s first openly gay character, although this is never focused on in-depth. Rather a quick suggestive line in the film was used.

My girlfriend’s daughter got me pulling my hair out.

Rather, Onward opts for a quick-cut soundtrack and a sprinkle of pixie dust. This helps march the plot forward at a comfortable pace, being sure not to distract from the on-screen magic while complimenting suspenseful moments.

The flow of the world of Onward and the overall message is a linear ascent to the edge of a sunset cliff.

Through the fog of fantasy elements, the mission is clear and Pixar makes it obvious the boys’ hunger for a glimpse of their father is deeply rooted in their brotherhood. They will stop at nothing and give everything for just that chance.

The overall message is one of family, adventure, belief, and taking chances. You might just shed a tear, or at the very least find yourself cheering for the brothers’ victorious quest, Onward!