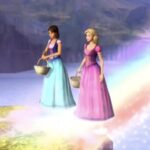 Barbie and the Diamond Castle Overview

Two best friends, Liana and Alexa, embark on a journey to find the Diamond Castle! With the help of music, the girls overcome challenges that show friendship is a true treasure.

Barbie and the Diamond Castle Cast and Characters

Barbie and the Diamond Castle Plot

Barbie and Teresa are singing a song about friendship. As they finalize their arrangement, Stacie, Barbie’s younger sister, storms into the room complaining about her best friend, Courtney.

To appease Stacie, Barbie tells her how she knows about a story of two best friends who have been in the same situation in their friendship.

It is a story about best friends Lianna and Alexa who live in a world with good and bad magic, flying serpents, and a Diamond Castle. They grow beautiful flowers in their garden to sell in the village.

One day, Lianna sees a pair of perfect heart stones in the river, which she then makes into a necklace for her and Alexa. Then the two walk together in the woods where they see an old lady.

Lianna offers her lunch to the old lady despite her growling stomach to show gratitude. In return, the older lady offers Lianna one of her treasures.

In order not to insult the old lady, Lianna chose one item from the old lady’s basket, which was a worn-out heart-shaped mirror. As the two continue tending their flowers, a dark cloud appears in the sky, bringing a strong storm that destroys their garden.

As the two best friends were singing, they noticed another voice was singing along with them. A young lady named Melody got trapped in the heart-shaped mirror that Lianna received from the old lady.

The two become friends with Melody and ask her to teach them her favorite song. While singing, the flying serpent, Slyder, hears Melody and reports to his dark mistress that the apprentice is still alive.

Lydia, the dark mistress, orders Slyder to capture Melody because she holds the key to the Diamond Castle. The castle was home to Dori, Phaedra, and Lydia, who are the three Muses of music.

However, Lydia became greedy, which compelled the other Muses, Dori, and Phaedra to hide the Diamond Castle. They entrusted the key to Melody, but Slyder chased her, and her only chance to escape was to hide in the old lady’s mirror.

With their house burnt by Slyder, Lianna and Alexa are more determined than ever to help Melody get to the Diamond Castle to end the dark clouds wreaking further havoc in their land.

As they are traveling towards the Seven Stones, they pass by the Valley of Flowers and find two lost puppies which they named Sparkle and Lilly.

The hungry travelers then reach a village, and they see a tavern where they can eat. Fortunately, the tavern owner requires musicians to entertain his customers, and the two offer their services in exchange for food.

While at the tavern, they meet twins Jeremy and Ian, who accompany them later on their journey. Lianna and Alexa then continue on their journey, but Lydia finds them and then attempts to mesmerize them to get the mirror.

Unaffected by Lydia’s magic, the two escape, and the twins arrive just in time with their horses to help. They then encounter a leprechaun who asks riddles.

When Lianna provides the correct answer, a rainbow bridge appears, which carries the best friends far along in their journey, but they accidentally leave the twins behind in their haste.

As they are walking in the woods, Lianna and Alexa see a beautiful mansion, and they are surprised when the keepers of the estate tell them that they are the prophesied owners they have long been waiting for.

It was everything that Alexa dreamed of, so when Lianna wanted to move forward on their journey, Alexa refused to go. Lianna goes to the Diamond Castle without Alexa, and in her absence, Slyder arrives at the mansion to kidnap Alexa.

As it turns out, the keepers were mesmerized by Lydia beforehand, and as Alexa removed her necklace, she also no longer has protection against Lydia’s spell. Alexa tells Lydia where to find Lianna, and Slyder goes and snatches Lianna.

Lydia can get the mirror at last and tricks Melody into believing that she will release her friends once she takes her to the hidden Diamond Castle.

The magic of the Diamond Castle was able to bring Melody back to her human form. Still, when everything seems to be going well, Lydia suddenly appears to destroy the castle and all its magical instruments.

Lianna, Alexa, and Melody fight Lydia’s evil music by using the castle’s magical instruments. The power of good music turned Lydia and Slyder into stones, and they summoned the Muses back to the Diamond Castle.

To reward them for their bravery, the Muses replace the twin’s broken guitars, give magical flower seeds to the two best friends, and promote Melody as the third Muse replacing Lydia.

As the story’s happy ending comes to a close, Barbie tells Stacie that real friends should stick together and advises her to make up with her best friend.

Barbie’s next holiday movie is Barbie in ‘A Christmas Carol’, which was released in 2008. Join Barbie on her Christmas adventure!