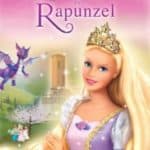 Barbie is an artist based on the story of Rapunzel with long blonde hair trapped in a tall castle tower. She enjoys spending her free time painting and finds her way out of her castle tower to save her prince.

Barbie as Rapunzel Cast and Characters

Barbie as Rapunzel spends most of her life locked away in a castle by Mother Gothel with only her friends Penelope the Friendly Dragon and Hobi the Nervous Rabbit.

When Rapunzel isn’t cooking or cleaning for Mother Gothel, she spends her time painting. She paints beautiful portraits and murals with the encouragement and help of Hobi and Penelope.

One day when Mother Gothel is out of the castle, Rapunzel finds a secret passage in the kitchen that leads to a room full of exciting things, like a portrait of Mother Gothel and a man whose head has been ripped apart.

She also finds a beautiful box with a silver hairbrush inside with an inscription from Rapunzel’s parents! Confused and hurt by this discovery, Rapunzel follows a secret tunnel under the room that Penelope found into the forest.

While walking through the forest, Rapunzel saves the lovely Princess Katrina from falling into a pit with the help of Katrina’s older brother, Stefan. When Rapunzel realizes what time it is, she runs off back to her tower without learning Prince Stefan’s name.

Unfortunately for Rapunzel, Otto (Mother Gothel’s trusty ferret) followed her down the secret tunnel and into the forest. Otto then tells Mother Gothel of Rapunzel’s short adventure, and Mother Gothel demands to know the handsome stranger’s name.

Rapunzel tells Mother Gothel that she doesn’t know, but Mother Gothel doesn’t believe her, and she destroys Rapunzel’s paintings and supplies to punish her.

Rapunzel goes to bed heartbroken, only to wake up the following day to find a beautiful paintbrush in the place of the hairbrush that her parents left her.

Rapunzel gets to work quickly with her new paintbrush and paints a mural of the village nearby. She soon discovers that the paintbrush made the painting a portal to the village! Rapunzel steps through the portal and takes in the sights of the village.

While she is out exploring, she runs into the handsome stranger again. She insists on him not revealing his name, and he, though confused, invites her to a masquerade ball at the palace that evening.

Rapunzel, Penelope, and Hobi start to get ready for the royal ball using the magic paintbrush to get the perfect gown for Rapunzel. Much to Rapunzel’s dismay, Otto steals the invitation to the royal ball and gives it to Mother Gothel, who cuts off Rapunzel’s hair and casts a potent spell on Rapunzel’s room that keeps those who have lied inside.

Heartbroken and not sure what to do, Rapunzel tries to come up with an escape plan. With the help of Penelope, who recently learned how to fly, and Hobi, who is always along for the adventure, Rapunzel makes it to the castle after realizing she never lied to Mother Gothel about the handsome stranger’s name.

Mother Gothel walks in and reveals that she was the one who took the baby girl all those years ago because King Wilhelm didn’t love her. Outraged by this, King Wilhelm attacks Mother Gothel but is interrupted when Rapunzel makes her entrance.

King Wilhelm recognizes his daughter, and Mother Gothel is outraged. Rapunzel runs back through the portal into her spell-warded room, where she traps Mother Gothel due to all of Mother Gothel’s lies.

Rapunzel returns to the castle, where she is reunited with her long-lost family and finally learns the handsome stranger’s name. Rapunzel and Stefan get married, bringing peace to their kingdoms and living happily ever after.

Barbie’s next movie is Barbie of Swan Lake, which was released in 2003. Join Barbie on her next adventure!