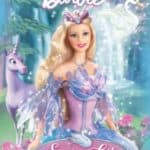 Barbie of Swan Lake introduces Barbie as Odette. The story begins a the young daughter of a baker, follows a unicorn into the Enchanted Forest, and is transformed into a swan by an evil wizard intent on defeating the Fairy Queen.

The story begins with Barbie telling her little sister Kelly a story. Kelly was feeling nervous because she had to go on a camping trip for the first time.

Barbie tries to make Kelly feel better by telling the story of Swan Lake. This story follows Odette, a young girl who works in a bakery with her father and sister.

Odette’s passion in life is dancing, but since she’s too busy living in her small village and running the bakery, there’s little time for dancing, even though she’s very talented.

One day, a unicorn runs through the village, trying to escape people trying to hunt her. Odette notices this event and decides to help the mystical creature, whose name is Lila.

Odette manages to free Lila and ends up following her to an enchanted forest. When Lila gets caught in a trap, Odette tries to find something to free her. She finds a crystal and easily lets Lila free. Other creatures that live in the forest watch with astonishment what Odette did.

Later, a fairy queen appears and tells Odette that whoever frees the magical crystal has to defeat the sorcerer, Rothbart. The fairy queen proceeds to tell Odette the story of Rothbart, her cousin.

He was so jealous and furious that she was chosen to be the next ruler of the enchanted forest instead of him. Rothbart left for years and returned with new dark powers.

Along with her daughter Odile, Rothbart took most of the enchanted forest for themselves, even putting spells on the citizens, turning them into animals.

Being too scared to help, Odette declines the offer, and Lila escorts her out of the forest, but she doesn’t get too far. Odette is confronted by Rothbart who puts a spell on Odette.

The fairy queen doesn’t get to the scene on time and fails to reverse the spell. She doesn’t have much magic left, so she offers Odette a tiara with the crystal to protect her from Rothbart’s dark magic. Odette now can stay as a human during the night and as a swan during the day.

Lila and Odette visit Erasmus, a troll who has access to an extensive library, hoping to find a book that will tell them how to break the spell. The search is unsuccessful.

Rothbart takes this opportunity to lure Daniel, the prince, to the forest to kill Odette. The prince, who was out for a hunt, sees Odette as a swan. Just when he’s about to shoot her, he is captivated by her beauty and doesn’t take the shot.

Rothbart appears once again, threatening the prince. Odette transforms in front of the prince to protect him from Rothbart’s magic. After scaring Rothbart away, the prince and Odette spend the night in the enchanted forest and begin building a romantic connection.

Erasmus finally finds the book they were looking for; it turns out the key to defeating Rothbart is true love. However, if the prince falls in love with another woman, the crystal will lose its power, and Odette will die.

Rothbart learns this information and starts planning his revenge. While Odette is preparing for the ball in which the prince will announce his true love, Rothbart kidnaps Erasmus. Odette rescues Erasmus, but Rothbart takes this opportunity to take Odile to the ball disguised as Odette.

Odette arrives at the ball late, and she sees when the prince announces Odile as his true love. The crystal loses its powers, and Odette collapses. Rothbart then takes the crystal from Odette.

The fairy queen takes Odette to the forest to help her, but Rothbart goes to finish her. The fairy queen attempts to protect her people and challenges Rothbart for a duel. Because she has almost no magic left, she failed, and Rothbart turns her into a mouse.

Odette wakes up, and Daniel comes back to the forest to fight Rothbart. His magic is too strong now, and it hits both Daniel and Odette, leaving them unconscious.

Rothbart thinks he won, but then the magic from the crystal is too much for Rothbart, and he ends up running into his very own trap. Odette and Daniel protected each other with their true love, which leads to Rothbart’s demise in the end.

After these happenings, Odette and Daniel get married, and the enchanted forest is free again.

Kelly feels encouraged by the story and tells Barbie she will do her best on the camping trip. Barbie smiles at Kelly’s motivation to go through challenges, just like Odette.

Barbie’s next movie is Barbie as The Princess and the Pauper, which was released in 2003. Join Barbie on her next adventure!