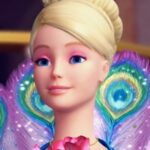 Barbie as the Island Princess Overview

Marooned on a South Sea island, the beautiful young woman, Ro, sees her world turn upside down, when an adventurous prince takes her and her furry friends to explore civilization. Could Ro be Rosella, the missing Island Princess?

Barbie as the Island Princess Cast and Characters

Barbie as the Island Princess Plot

Barbie as the Island Princess is an animated musical film released in September 2007. Five days after its release, the film also premiered on the television channel Nickelodeon. The film is written by Elana Lesser and directed by Greg Richardson.

On a tropical island in the South Seas resides two characters known as Sagi and Azul. Sagi is a red panda, and her friend Azul is an Indian Peacock.

One day after a big storm, they find a lost girl and a chest full of her possessions washed ashore. They begin calling her RO because those are the letters on the chest.

After ten years pass, she has grown into a stunning young lady who can talk to animals, and together they play games with Azul, Sagi, and an elephant baby called Tika.

Later, Prince Antonio explores the South Seas and lands on the Island where Ro and her three friends live. He encounters trouble with the crocodiles. Before they attack him, Ro appears and gives him a hand saving him from the alligators.

The prince is fascinated with Ro, asking her if she could come with him to his Kingdom of Apollonia. He does this by promising to help her find clues to her past.

The island girl, Ro, accepts the offer, and along, she invites her three friends: Azul, Saga, and Tika. On their way to the Kingdom, love starts to bloom between the prince and Ro.

On their arrival to the Kingdom, the prince’s mother, Queen Danielle, and his father, King Peter, have been planning to arrange a marriage for the prince.

This wedding aims to forcefully avert his son’s love for adventuring and transfer that energy into a family. The king is angry and immediately hates the “Wild Island Girl” for interrupting his arrangements.

The lady, the prince, is set to marry Princess Luciana, and her mother, Queen Ariana, is invited to the Kingdom so that he can meet them. Not known to anyone, earlier King Peter had dismissed Luciana’s grandparents to swineherds for they had committed treason.

Ariana wanted to seek revenge on Peter for doing this act. So, to achieve so, she was married to an aged king to earn the title of Queen. Ariana did not want her plans to go to waste, and this wedding to her had to happen.

So, she noticed that Ro would be a distractor to her plans and decided to make sure that Ro did not marry Antonio. But Antonio could not help but, over and over, kept falling for Ro.

Ro started to think of going back to the Island after thinking that she was a failure. Her three animal friends and Tallulah encouraged her and got her dressed for a royal ball.

At the ball, Antonio proposed to her deceitfully, which she declined for reasons that he needed to fulfill his obedience to his father, King Peter.

Antonio does not want to take after his father, so the crown is given to one of his sisters. He writes a note to Ro telling her that she will flee with her. Tika conceals the message because he fears losing Ro.

Ariana, on her mission, sends pet rats to spread “sunset herb” across the Kingdom. The animals begin to get into a coma, and all the blame goes to Ro; she is imprisoned following Peter’s commands.

Peter concludes to release Ro only if Antonio agrees to marry Luciana. Ro and her friends are sent away in a ship where Ariana extorted the sailor to throw them into the waters. Ro recalled the shipwreck when she was young and that she was called Rosella.

Some dolphins help them get back to the Kingdom. A little bird informs Ro that Ariana had added sunset herb to the wedding cake so that Antonio and Peter would die after ingesting it.

Tika avails to stop the wedding, wanting Antonio to help Ro, who was trying to wake Azul up. Tallulah and Azul finally wake up from the antidote given.

Ro blames Ariana for the sunset herb, but nobody believes her. Luciana supports her when she discloses that her mother had warned of eating anything at the wedding. Ariana runs away, but her transit collapses, and she is taken into a pigsty.

Ro tells Antonio that she had remembered her name was Rosella, and Queen Marissa of Paladia, a guest at the wedding, claims that she has been looking for her lost daughter who went missing at the sea years ago.

To certify that Marissa and Ro are families, they sang a bedtime song they did when together. Finally, Ro and Antonio get married, with Peter pleading to be pardoned.

Luciana meets her love in one of the men at the wedding, and Ro, with her friends, Tallulah and Antonio, together flee to experience new environments.

Barbie’s next movie is Barbie Mariposa and Her Butterfly Fairy Friends, which was released in 2008. Join Barbie on her next fairy princess adventure!

To see a full list of Barbie characters, films with news, announcements, memes, and top 10 Barbie movies, visit our Barbie film home page. Google Images is a good place for Barbie as an Island Princess pictures.