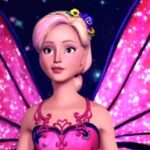 Join Barbie in an all-new world of Butterfly Fairies! When the Queen falls ill, it’s up to brave Mariposa and her friends to journey beyond the safe borders of the city to find a cure.

Barbie Mariposa and Her Butterfly Fairy Friends Cast and Characters

One morning, Elina wakes up to find that Bibble is unexcited about visiting his friend Dizzle. He even wants to cancel his trip because he’s worried that Dizzle’s friends won’t like him. Elina tells Bibble a story about her good friend Mariposa to cheer Bibble up.

Mariposa is a butterfly fairy from Flutterfield, a distant realm inaccessible by everyone else in Fairytopia because it is infested with evil flying creatures known as “Skeetzites.”

Instead of going to a party, Mariposa preferred to sit alone on the edge of their “City of Lights” and gaze at the stars. She often dreamed about the world outside of Flutterfield.

Mariposa always felt left out until one day; she accidentally bumped into Prince Carlos, son of Queen Marabella. Instantly, they became friends, and he later entrusts her with a map leading to an antidote that will ultimately save the queen.

It was then that Mariposa realized that Henna poisoned the queen while the prince was doomed to be imprisoned for his protection. When she opened up her trouble to her friends, Rayna and Rayla, the sisters were very eager to help in the hopes of winning the prince’s heart.

The three butterfly fairies then follow the map to obtain the antidote. Mariposa’s ingenuity brought them far along in their journey, but as the Skeetzites chased them, the map accidentally fell and was nibbled by one of the monsters.

They suddenly lost hope until Mariposa remembered the sun’s position on the map and started leading the pack to the east towards the rising sun.

This brought them to Bewilderness, where they met Zinzie, a Meewah who accompanied them to the center of Bewilderness in exchange for fluttercorns.

From the center of Bewilderness, they discovered another clue in their Ilios quest that led them to the mermaids, who agreed to help them find the Cave of Reflections in exchange for concho shells.

While the three butterfly fairies searched for the antidote, the queen got weaker, so the prince tried to escape, only to be captured again by the guards.

Willa, Mariposa’s best friend, helps the prince and informs him that Henna, the queen’s attendant, is the one poisoning the queen.

As Willa and the prince investigated further, they discovered that Henna formulated a potion that allowed her to control the Skeetzites to have an army after taking over the city.

Fortunately, Mariposa and her friends are near the end of their quest to find the Ilios antidote as they finally reach the Cave of Reflections. This is the last and final location but obtaining the treatment is no easy feat.

Although Mariposa made it to its celestial section where the antidote is located, she is still faced with utmost difficulty as she has to choose which of many stars contains the cure.

Only one of them can enter its bottomless abyss. As she gazed at the many constellations, she noticed that the archer constellation was pointing its bow and arrow to a lone star.

Mariposa believed that the lone star was the one she needed, and she was unfazed even if her reflection told her otherwise.

Indeed, the lone star was the antidote that would heal the queen, and the fairy of the cave was pleased with Mariposa that she made her wings look even better.

She then had to make the right decision by confronting her doubts and fears. After obtaining the Ilios antidote, the three butterfly fairies returned to Flutterfield to find that the Skeetzites were attacking it.

The lights that protect the city are weakened as its source, the queen, is now weak and dying. Mariposa then rushed to the queen to give her the antidote, but Henna was quick to steal it from her.

As Henna was busy convincing Mariposa to take her side, a little flutterpixie snatched the antidote and gave it to Mariposa. The queen received the cure just in time, and all of the lights in the city were reignited.

As the Skeetzites ran away from the light, Henna was caught in the stampede of the monsters. The queen awarded a Royal flower crown to Mariposa, Rayna, Rayla, Zinzie, and Willa to honor their bravery in a beautiful ceremony.

Just right after Elina finished the story, Dizzle suddenly appears to visit Bibble. As it turns out, Dizzle’s friends were flutterpixies from Flutterfield.

Bibble thanked Elina for making him believe in himself, and he then flew away with his friend Dizzle and his newfound friends, the flutterpixies.

Barbie’s next movie is Barbie and the Diamond Castle, which was released in 2008. Join Barbie on her next royal adventure!