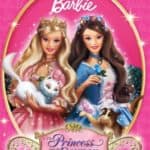 Barbie as The Princess and the Pauper Overview

In Barbie as The Princess and the Pauper, Princess Anneliese discovers an unexpected friendship when she meets the humble dark-haired commoner, Erika.

A terrible conspiracy threatens the freedom of the kind noblewoman, and only Erika, Anneliese’s determined ally who bears a striking resemblance to her, can save her.

Barbie as The Princess and the Pauper Trailers & Clips

Barbie as The Princess and the Pauper Cast and Characters

Barbie as The Princess and the Pauper Plot

Barbie Princess and the Pauper is based on two beautiful girls, Anneliese and Erika, who are born at the same time and become separated.

Anneliese becomes a Princess. She is betrothed to Dominick, but her genuine affection lies with her tutor Julian.

Erika is now a less fortunate pauper. She toils away at a clothing shop in an attempt to pay down her parent’s debt. More than anything, Erika’s wish is to become a great singer.

The Queen is unaware that Preminger’s theft of gold from the royal mines is the actual cause of the Kingdom’s bankruptcy.

Once Preminger learns of Anneliese’s arranged marriage, he plots to kidnap Anneliese. He intends to stage a fake rescue of Anneliese and ask the Queen for her hand to assume the throne.

Their paths cross one day. Together, they resolve to overcome their challenges and to connect again soon.

Preminger’s thugs kidnap Anneliese. They leave a forged note to suggest that Anneliese ran away from home. To save the arranged marriage, Julian convinces Erika to disguise herself as Anneliese.

Preminger is shocked to find Princess Anneliese still in place but comes to realize the disguise. Erika, undercover, falls in love with Dom, but she continues to worry about being discovered.

Annaliese helps Nick escape, but he is denied entry to the palace because the guards believe that disguised Erika is the true princess at the time. In a classic case of mistaken identity, Annaliese becomes Madame Carp’s captive. Julian overhears Preminger’s plans to recapture Anneliese, but instead, he is found and captured.

Serafina is told to find help for Anneliese, but Preminger intercepts her. Anneliese and Julian are then taken to the mines. Preminger then reveals Erika to be a fake, having her imprisoned.

The Queen reluctantly consents to Preminger’s account of Anneliese’s death, and in sacrifice to her Kingdom, marries him.

After singing a lullaby, making the guard fall asleep, and stealing his keys, Erika escapes. Anneliese and Julian discover a way to rebuild the Kingdom’s treasury with crystal-filled geodes together. The captives make a thrilling escape. They manage to flood the mine shaft with water and float towards the surface.

Anneliese bursts into the Queen’s wedding just in time, proving her identity and revealing Preminger’s scheme. Preminger, Nick, and Nack attempt to flee, but they are quickly arrested.

Anneliese explains to her mother, the Queen, that she and Julian have discovered how to save the treasury, and she and Julian intend to marry each other.

Soon, the mine’s crystals restore the Kingdom’s prosperity. Erika leaves Madame Carp to begin her singing career. She travels the world, eventually discovering that her genuine desire is to return home and marry Dominick.

A joint wedding between Erika and Anneliese culminates in a happily-ever-after. The two couples ride off together in a horse-drawn carriage.

Barbie’s next movie is Barbie Fairytopia, which was released in 2003. Join Barbie on her next adventure!