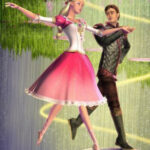 Barbie in the 12 Dancing Princesses Overview

The widowed King Randolph enlists the help of his cousin to teach his daughters the proper royal etiquette. Instead, she bans all dancing in the palace. Can the twelve dancing princesses save the kingdom with their late mother’s gift?

Barbie in the 12 Dancing Princesses Cast and Characters

Barbie in the 12 Dancing Princesses Plot

Barbie stars as Genevieve, a sister to eleven who lived with their widowed father, Randolph. The princesses had one thing in common, dancing. Their father did not like how they behaved and believed that the girls should act more like princesses.

He believed his daughters needed a woman’s touch he summoned his cousin, Duchess Rowena. The royal society viewed the princess’s adventurous and spirited nature as “unladylike,” making him disheartened by their comments. However, Rowena decided to take advantage of the situation.

As the film begins, the girls start sensing danger and try to reason with their father, asking them to listen to her. Rowena decided to make the girls’ lives miserable by stripping the castle of everything they loved and making them practice proper behavior.

The princesses began to feel sad, but they eventually found comfort with a story their mother gave them when they turned five. The story was about a princess who discovered a magical kingdom where there were flowers of gold that would grant wishes and could dance straight out for three days on an enchanted pavilion.

Lacey, their youngest sister, sees that her lily matches the lily on the floor. The girls discover that the story is true. Genevieve tells her sisters to find their match on their books to a stone.

Lacey falls and hurts her knee. Genevieve hurriedly rushes to a nearby fountain and dabs water to the cut, and it heals instantly, revealing to them that the water there is magic. As the night ended, they saw all the dancing wore out their shoes. So, they went to sleep.

The next day the girls woke up tired. The duchess sees their worn-out shoes and suspects they were out dancing. Derek, the royal cobbler who was Genevieve’s love interest, came to fix their shoes.

Genevieve dances the same dance outside on the mosaic pavilion. She asks Derrick to help her find out Rowena’s true intentions. The duchess denies them to visit their father, who had fallen ill. The dutchess disposes of the tonic the doctor gives her.

That night Rowena left his guard Desmond to watch over the girls, but the sisters snuck out again to the magic realm and danced the night away. Derrick discovers Rowena’s secret and hurries back to warn the sisters.

They also wake up tired the next day. Rowena came demanding the truth about last night; they gave her the same story making her even angrier. She blamed them for their father’s illness.

Heartbroken, the girls decide to go to the magical kingdom and stay there. Rowena finds they are gone, becomes furious, and sends Desmond to find them the next day.

Derek then makes it to the castle but realizes the princesses are gone. Remembering Genevieve’s dance moves, he sneaks to their bedroom and enters the realm.

Unfortunately, Rowena discovers the realm. Derek tells the girls the truth about Rowena selling their mother’s possessions for poison; they decide to go back and save their father even though they would give up the magic world.

Rowena destroys the gateway’s mosaic after discovering the girls know the truth. She then tricks the king into making her acting queen till he recovers.

They discover that the only way back is for Genevieve and Derek to dance. The realm leads to their mother’s pavilion. She discovers that Rowena is now the queen. Their diverse talent leads them to Rowena to confront her. Desmond seizes lacey as she tries to help.

Derrick and Genevieve defeat Rowena’s enchanted armor for protection, but Desmond is brought in and captured. Rowena knew that the power of her sisters’ resistance came from Geneviève.

She uses her wish flower to Genevieve so she can dance forever and ever, but she blocks it and returns it to her, and she starts dancing instead. Desmond tries to help, but they dance out of the castle.

Lacey gives her father some magic water from the Pavillon she had on her and heals the dying king. The king apologizes to his daughters for not believing them.

He now truly understands them and lets them be themselves. Genevieve and Derik wed at the end of the film.

Barbie’s next movie is Barbie and the Barbie Fairytopia Magic of the Rainbow, which was released in 2007. Join Barbie on her next fairy adventure!