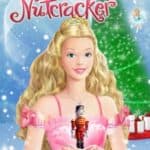 Barbie in the Nutcracker Overview

Barbie shows that if you are kind, clever, and brave, anything is possible in this tale of Clara and her amazing Nutcracker, who set off on an adventure to find the Sugarplum Princess.

Barbie in the Nutcracker Trailers & Clips

Barbie in the Nutcracker Cast and Characters

Barbie in the Nutcracker Plot

Barbie in the Nutcracker begins with Barbie’s younger sister, Kelly, struggling to rehearse her ballet solo. Barbie stars, playing the role of Clara, tells her the Nutcracker story.

Tommy accidentally breaks the doll’s arm, and Clara sleeps on the couch after fixing it. The Nutcracker jumps alive. When she wakes, she sees him fighting the evil Mouse King and his army, who has invaded Clara’s parlor.

She throws her shoe to help the Nutcracker. The Mouse King retreats, but Clara is shrunk with a curse.

The amazing Nutcracker says he is searching for the Sugarplum Princess, the most powerful fairy in Parthenia, to reverse the Mouse King’s evil enchantment magic.

The owl from the grandfather clock gifts Clara a locket with the power to send her home upon opening it and return her to her normal size.

Nutcracker and Clara go through a mouse hole and arrive in a cave of ice. Some snow fairies help them escape. The Mouse King’s spy, a bat, named Pimm, sees Clara and the Nutcracker enter.

The pair come upon a village made of gingerbread. They meet Peppermint Girl, Gingerbread Boy, and their horse, Marzipan. Clara learns that Prince Eric, the rightful ruler of Parthenia, is missing.

Captain Candy and Major Mint then save the group from the Mouse King’s army. Mint tells Clara that the former king appointed the mouse as acting ruler.

Clara figures out that Nutcracker is the missing Prince Eric, who turned into a Nutcracker when the mouse determined that he wanted to rule forever.

The group arrives at the sea of storms and starts building a boat. Nutcracker and Clara free some flower fairies from a well. Suddenly, everyone is attacked by a rock giant that the Mouse King sent.

The boat is destroyed, but the snow fairies come and freeze the water so that the group can cross in Marzipan’s sled. The Nutcracker cracks the ice behind them with his sword, plunging the rock giant down into the sea.

When they reach Sugarplum’s island, the boys are caught in a trap and are carried off by Pimm. The flower faeries carry Clara to the Mouse King’s castle, where she sneaks in and frees them.

Then, they fight with the Mouse King until the Nutcracker deflects a shrinking evil spell, and he is shrunk to the size of a normal mouse and runs to the sewers.

Clara kisses the injured Nutcracker, and he transforms back into Prince Eric, revealing her as the Sugar Plum Princess. Everyone celebrates as Eric is crowned king.

The shrunken Mouse returns on his bat, grabbing and opening Clara’s locket, and sending her home.

Clara wakes up back on the couch, but the Nutcracker is gone. Her grandfather Drosselmeyer tells her it was all her imagination.

Her favorite Aunt Elizabeth arrives with her friend, Eric. He asks Clara to dance. The Sugarplum Princess and the Prince are shown dancing in a snow globe.

Barbie in the Nutcracker movie ends, and Kelly and Barbie embrace the beauty of ballet and dance together.

The real-life movements of dancers are thanks to acclaimed choreographer Peter Martins. Additional kudos go to the beloved music of Tchaikovsky.

Barbie’s next spectacular adventure movie is Barbie as Rapunzel, which was released in 2002. Join Barbie on her next adventure!