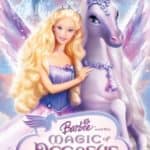 Barbie and the Magic of the Pegasus Overview

Barbie and the Magic of Pegasus is a soaring adventure. An unfortunate incident with the powerful Wenlock sends the teenage Princess Annika on a mission to the magnificent Cloud Kingdom.

With her new friend, the wonderful flying horse, Brietta. Will she break the wizard’s spell to save her family?

Barbie and the Magic of Pegasus Trailers & Clips

Barbie and the Magic of Pegasus Cast and Characters

Barbie and the Magic of Pegasus Plot Summary

With its humor appropriate for all ages, Barbie and the Magic of Pegasus taught us always to have hope and that love will always prevail.

Directed by Greg Richardson and written by Elena Lesser and Cliff Ruby, the movie was released in 2005. Among its casts was Kelly Sherridan, who voiced Princess Annika, the film’s protagonist.

The animation and voice-over of the film effectively captured its audiences, who are primarily young children. With this, it was successful in passing on the film’s message about morals and lessons.

The story starts with Princess Annika’s strong will and her family, who are overprotective of her. One day, on her birthday, the Queen wanted to surprise her with a gift.

However, the Princess went out to skate and was nowhere to be found in the castle. Her parents worried and led them to forbid her from ever going outside.

Despite her parents’ decision to forbid her, Annika still went out that night to go to a festival. There, she met a powerful wizard named Wenlock, who proposed marriage to her.

Princess Annika refuses, but it did not stop Wenlock from pursuing the Princess. He went to the castle and told the King and Queen the fate of their other daughter. However, Annika still refused.

Eventually, Wenlock turned everyone to stone except for Princess Annika, who saved a flying horse, Brietta. Wenlock warns the Princess that if the Princess still refuses to marry him in three days, the curse on everyone in the castle will be permanent.

Brietta takes Princess Annika to the Cloud Kingdom, where she discovers what Wenlock meant when he spoke about the King and Queen’s other daughter.

She found out that the other daughter was Brietta, and she was also cursed by Wenlock when she, too, refused to marry him. Annika now realizes why the majesties were overprotective of her.

To break the spell, Annika decided to make the Wand of Light. To make this, they must have three items: a measure of courage, a ring of love, and a gem of ice lit by eternal hope. The Cloud Queen offered her help by giving Brietta a crystal bell she can ring whenever she needs helps.

Next, they traveled to the Forbidden Forest, where they met a man named Aidan, who helped them escape from being caught in a net. Afterward, when Annika and Shiver fell into a giant’s stew pot, Annika had to trick the giant into chaining himself.

Annika used her hair ribbon, which is almost the same size as her, to escape the pot. Representing a measure of courage, it eventually turned into a staff for the Wand of Light.

Annika had to trade her skates for a map that they later found to be a fake as they traveled further. The group found themselves in a cavern filled with gems, where they were allowed to take whatever they need.

They got two gems. However, Shiver caused a cave-in, and the group barely escaped. Aidan, while forging the Wand, started sharing his story. He revealed that he ran away from his parents and lost his money because of gambling. His guilt made him want to return to them and ask them to forgive him.

Brietta’s tiara completed the items. They used it as the ring of love, and the Wand of Light was forged, turning Brietta back into her human form.

On their journey back to the Cloud Kingdom, they were pursued by Wenlock with the help of two pegasuses they summoned through the Cloud Queen’s bell.

Biretta was hurt, provoking Annika to use the wand to defeat Wenlock. However, Annika was unable to defeat him. Eventually, she gives up and agrees to marry Wenlock to free her parents from the curse of being turned to stone.

However, it was Wenlock who refused the marriage this time. He said that she is hateful, just like his other wives, and no longer wishes to marry her. He took the wand and caused a snowslide which trapped Annika.

Aidan helps Annika to climb out and took her to the Cloud Kingdom. When she woke up, they decided to go to Wenlock’s place to retrieve the Wand. Aidan fought Griffin and Annika searched for the Wand. When she found it, unfortunately, the gem falls. Aidan gave up his gem to remake the Wand.

After realizing how to defeat Wenlock, Annika asked the Wand to do it for her family and friends, who she wholeheartedly loves. Eventually, Wenlock turned into a powerless person, and the spell Wenlock used against the King and Queen was broken.

Annika’s family, now complete, celebrates while his family forgave Aidan. Aidan introduced Annika to his family, and later on, the two were married and are the rulers of the Kingdom.

On the other hand, the Wand was given by Brietta to the Cloud Queen, who made the Wand the first star at night.

Barbie’s next movie is Barbie Fairytopia Mermaidia, which was released in 2006. Join Barbie on her next adventure!

To see a full list of Barbie characters, films with news, announcements, memes, and top 10 Barbie movies, visit our Barbie movie home page to see all Barbie movies in order. Fandom is also a good gathering place for Barbie fans.