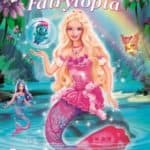 Barbie Fairytopia: Mermaidia the animated follow-up to Fairytopia, Elina enlists the help of a mermaid, Nori, to save her friend Nalu, a merman prince who has been captured by the wicked Laverna.

Barbie: Mermaidia is the 7th movie of the Barbie franchise and the sequel of Barbie Fairytopia. It was released in March 2006, produced by Luke Carroll, and written by Elise Allen and Diane Duane.

Elena, who has wings, is having difficulty flying. Suddenly, a juvenile sea-butterfly fairy sees the merprince and Elena’s friend, Nalu, get taken away by some of Laverna’s Fungi at the Crystal Cove. She is not able to help him, so instead, she tells Elina about it.

Laverna is searching for the Immunity Berry after being banished. When eaten, this berry will make someone immune to any magic.

Max, who leads the Fungai, questions the captured Nalu, who knows how to find it. After threatening to poison all of Mermaidia, Nalu caves and offers to show them the location of the Immunity Berry.

Nalu is taken underwater after he agrees to help. Elina, together with Bibble, follows them to the Crystal Cove. She is not able to find Nalu and instead met Nori, a mermaid. Nori insisted that they go and save the prince themselves.

With the use of magical seaweed, Elina can breathe underwater. Meanwhile, Nalu tricks the Fungi by pointing them towards the Carousel of Confusion, with waters that hypnotize people and make them forget. It took Max a long time before he figures out he’s been deceived.

Nori tries to locate Nalu through the oracle Delphine. Unfortunately, he is not successful because only the merfairies know where the oracle is. However, merfairies are too childish and only calm down when they talk to guests in their homes on land.

When she catches up to Nori, Elina convinces the merfairies to help, so they give her the oracle’s location. They find Delphine disguised as Shellie, a fairy ferry who guides travelers through a river at the edge of Mermaidia.

Elina accompanies Nori, who quickly out swims Elina. To catch up, Elina chooses to fly above the water. They both reach Delphine together, who did not tell them directly where Nalu is.

She instead tells them to look for the Mirror of the Mist in the Depths of Despair. She told them that they need each other to make it, and Elina might have to sacrifice. That is, Elina will have to give up her wings for a mermaid’s tail. Elina refuses Delphine.

In case Elina chooses to agree, Delphine gives her a magical pearl necklace. If the person who uses the pearl is on land by the time the last pearl becomes white, she will gain back her proper form. But if she’s still in water by that time, she will be a mermaid her whole life.

The two swim into the Depths of Despair, a dark vertical shaft in the ocean floor. Suddenly, Nori is trapped by a sea plant and asks Elina for help.

Unable to swim towards Nori, Elina uses the necklaces that turned her into a mermaid. With that, she was able to free Nori. Unfortunately, when they find the Mirror of Mist, they discover Nalu hanging in the air by his tail.

A magical bubble is made, which they can follow towards him. Suddenly, the two get matching tattoos which, Nori recognized as the Crest of Courage symbol.

They reach a cave with hot thermal vents that pops and matches what they saw in the Mirror already. They successfully pass through even though Bibble gets trapped midway.

Throughout the cavern are various magical fruits, and Bibble eats three of them. They also find Nalu guarded by Max’s fungi, which Bibble distracts by singing. The two mermaids, on the other hand, cut the ropes holding him to set him free.

Nalu is now rescued and very grateful. He warns them that Max found the Immunity Berry. The three fought to take back the berry Max picked.

Just as the last pearl is about to turn white, they succeed, and Elina reached the land. However, Max threatens that if they do not return the berry, he will poison the water.

Elina gives up the berry, but Max still drops the bottle of poison. Elina dives to catch it, and the last pearl turns white, turning her into a mermaid forever. Max escapes with the Berry.

They all thought that Max won. However, Nori reveals that they swapped the berry with a fake one. Elina then eats the true berry to restore herself and succeeds in getting back her wings.

Knowing Nalu and Elian were just friends, Nori expresses her love and then returns to Fairytopia.

On the other hand, Laverna thinks that the Immunity Berry is real and turns into a toad. She swore to take revenge on Elina, who is now reunited with her loved ones.

Barbie’s next movie is The Barbie Diaries, which was released in 2006. Join Barbie on her next adventure!