Back when the Earth was being overrun by glaciers, and animals were scurrying to save themselves from the upcoming Ice Age, a sloth named Sid, a woolly mammoth named Manny, and a saber-toothed tiger named Diego are forced to become unlikely heroes.

The three reluctantly come together when they have to return a human child to its father while braving the deadly elements of the impending Ice Age.

“So she picks this hair off my shoulder, and says, “If you’re gonna have a second mating dance, at least pick a sloth with the same color pelt.” And I’m thinkin’, “Whoa! She’s gonna go praying-mantis on me.” Know what I’m saying?”

“My family abandoned me. They kinda migrated without me. You should’ve seen what they did last year. I mean, they got up early, and quietly tied up my hands and feet, and gagged me with a field mouse, and barricaded the cave door, and covered their tracks, and traveled through water so I’d lose their scent, and… and… who needs ’em anyway?”

“Oh, isn’t there someone else you can annoy? Friends? Family? Poisonous reptiles?”

The movie is set in the year 20,000 BC. The animal kingdom has begun its great migration to avoid the ice age. Two animals have been left behind, a grumpy mammoth called Manfred and an enthusiastic sloth called Sid.

Trying to migrate on his own, after being abandoned by his family, Sid is befriended by two rhinos, Frank and Carl, but they try to attack him.

Luckily, Manfred steps in and saves Sid. The sloth is so happy that he decides to stay with the mammoth, which he is not impressed by, and calls him Manny.

The Smilodon, a pack of saber-toothed tigers, is watching a tribe of humans camped by a waterfall. Soto, the tiger pack leader, seeks revenge on the human leader, Runar, who has killed half of his saber-toothed pack.

He watches with his trusted second-in-command, Diego, as they see Runar has a wife, Nadia, and a son, Roshan. He vows to kill the child to get even and plans to attack the following day.

Diego chases Nadia and Roshan to a waterfall during the attack, jumping for it. Diego returns empty-handed, and they decide to meet up at a place called Half Peak, where Diego promises to deliver the baby to Soto.

Manny and Sid continue on their journey with the sloth, continuously talking too much to the mammoth’s annoyance. On the way, they discover Nadia, who is very weak after her escape and can only manage to hand her baby to them before she disappears from view.

Sid wants to help the baby and return it to its herd, but Manny is not interested in getting involved.

They walk on and meet Diego, who tells them he can help return the baby and try to take it. Manny doesn’t believe Diego and agrees to help Sid on his mission, and they leave Diego behind.

When they get to the human camp, they discover it’s been abandoned. Reluctantly, Manny agrees to head north with Sid to find the humans at their settlement at Glacier Pass, and Diego will be their guide.

As their journey begins, they meet up with some fanatical Dodos who give them food.

Diego is met by two of the saber tooth tiger pack, which delivers a message from Soto demanding the baby. He sends a message back to say he will get the baby and Manny, as well.

When Sid returns to the mud crater, the sloths are gone, and Frank and Carl are in their place. They chase after him again, and when Sid catches up with Diego, he pleads for help from him.

So he pretends to kill Sid, and after the rhinos have left, he releases him.

They continue their long journey through rugged landscapes and winter storms. Along the way, they meet Scrat, a squirrel-rat, who tries to tell them he has seen a pack of saber-tooth tigers, but Diego quickly flicks him away.

In a bid to catch up with the humans, Diego takes them through a shortcut that leads through an ice cave. Here on the walls are cave paintings that depict human hunters attacking a pack of mammoths.

Manny reveals that he and his family are in the painting and that the humans killed his family and left him angered by the experience.

The baby reaches out to the painted images, and his response comforts Manny and allows him to let go of his pain.

As they get closer to Glacier Pass, they come across a lava field to get passed. Diego almost falls into the pit but is saved by Manny. When Manny saves Diego, the ice he stands on collapses, and he falls in instead.

By dumb luck, the pit spits him out unharmed. Diego is amazed and asks why Manny saved his life? Manny says this is what the herd would do for each other. Nearby, Soto is waiting to ambush Manny with the help of Diego.

Sitting around a campfire that night, Diego begins to see the error of his ways and feels remorse for betraying Manny.

Later that night, Scrat approaches the fire to try and thaw out his acorn but only manages to turn it into a hot kernel.

The following day they finally reach Half Peak, and it’s here that Diego confesses to Manny the pack plans to kill him. The mammoth is so angry that he slams the saber tooth against the rock wall and wants to harm him.

Diego agrees to help Manny evade the killer pack with a change of heart.

The pack is ready to attack, and Sid tries to lead them away with a decoy baby made from snow and uses two pieces of bark-like skis. But the saber-toothed pack corner Manny and uses a tree trunk to knock them away.

One of them called, Zeke, is trapped by this, and Sid stomps on him, so he gets stuck in a hollow tree. Now it is just Manny and Soto who demands Diego to help him bring the mammoth down.

But he defends Manny instead and suffers for his betrayal as he is attacked by Soto and wounded. It is just the two of them, but he slams Soto into an ice wall in vengeance for his new friend.

The hard impact dislodges icicles above, which fall and impale the leader, and his friends, Oscar and Lenny, mourn his loss.

Manny, Sid, and the baby are safe, but it looks as if Diego did not survive the injuries he has sustained. The two friends head into the human settlement and are almost attacked until they reveal they have Roshan safe and well.

Runar is so grateful to Manny he presents him with a unique beaded necklace. Manny and Sid leave the settlement and are surprised to find Diego alive. The three now think of themselves as a herd and begin to head south for new adventures. 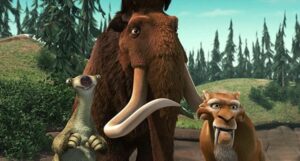