Plankton is a main character from the SpongeBob SquarePants animated series. Plankton and his wife Karen, who is a computer, run The Chum Bucket restaurant in hopes of building it to become more successful than the Krusty Krab.

The Chum Bucket is Plankton’s restaurant business in Bikini Bottom and is not nearly as popular as The Krusty Krab, the restaurant that his archnemesis Mr. Krab owns.

Due to Plankton wanting to have a restaurant as successful as the Krusty Krab, Plankton is constantly trying to steal Mr. Krabs’ secret formula.

Plankton’s wife Karen often helps Plankton develop schemes to get the Krabby Patty secret formula, but the duo is never successful in their efforts.

Sheldon J Plankton’s restaurant is not flourishing due to the poor quality of his burgers and rude service. His cruel treatment of the citizens of Bikini Bottom is also not helping his business thrive.

Plankton is a very tiny planktonic copepod and looks like a small pickle. He has short arms and legs, a big yellow eye, and a red pupil with one large eyebrow. He has two long antennae on his head that have spikes alongside both of them. He also has big white straight teeth.

Plankton is the son of Mama and Gordon Plankton and shares a birthday with Mr. Krabs. The two attended school together but were seen as outcasts as children.

School kids picked on Plankton because of his high intelligence, which led him to be teased as a nerd.

Plankton on SpongeBob SquarePants and Mr. Krabs discovered that they could gain popularity and earn money by creating a burger place. They began selling patties out of the local dump, which was unsuccessful.

A customer, Old Man Jenkins, was once knocked out from eating a burger contaminated with dump sludge. Eventually, Plankton and Mr. Krabs decided to go their separate ways.

Plankton then worked as a chef at Camp Coral, where he first met SpongeBob SquarePants character.

While Plankton is an intelligent creature, he is impulsive and lacks common sense. Simple oversites throw him that he could have easily prepared for. This is shown most notably in his failed attempts to get the secret Krabby Patty recipe.

Even though Plankton is small, he has a big power-hungry personality. Plankton is jealous, egotistical, and aggressive. He pretends to be SpongeBob’s friend with his evil plan of stealing Krabby Patty’s secret formula.

Plankton also has an obsession with world domination. He has big plans to dominate the world after he steals the Krabby Patty formula, and he even enslaved all of Bikini Bottom in The SpongeBob SquarePants Movie.

While the Plankton SpongeBob character is the main villain in the SpongeBob SquarePants franchise series, he seems to have a soft spot for his family.

On top of being affectionate to his wife, Plankton also shows a lot of love for his son Chip and his pet amoeba, Spot.

“SpongeBob, before we’re torn to shreds, I’d like to thank you for helping me look for Spot.”

“What? It’s just obvious that I’m a complete failure and a waste of a lower life form! Oh, woe is me!”

“Ah, a few blobs of ink doesn’t prove a thing. I’m as evil as ever. I’ll prove it right now by stealing the Krabby Patty secret formula.”

“I, the amazing Plankton, with the use of prestidigitation…will make a Krabby Patty disappear before your very eyes.”

“I don’t get it. No matter what I do, I always end up being squashed by someone bigger than me.”

“Secret mission, eh? Don’t you think I know what you’re up to? You want to eat at the Chum Bucket without your boss knowing. Karen, we’ve got a customer!”

“Yes! And after all these years, I thought I was the master of torture…Take the stupid patty. I don’t want the secret recipe anyway. I guess my restaurant will never be as good as the Krusty Krab. You don’t know what it’s like to be a loser.”

“‘Intern Wanted’ Apply today at Chum Bucket Labs? I’m a mad scientist! If getting help was that easy, I wouldn’t have built a computer wife!”

“No, I’m not on my way to the grand opening ceremony. I’m busy planning to rule the world!”

“No, not because I cheated! Because I’m an evil genius. And you’re just a kid.”

“Oh, uh, it says, ‘Discuss the secret ingredient of the Krabby Patty formula.’ How interesting.”

“I thought I was going to steal something. Can’t imagine why. So, I’m just enjoying this lovely day!”

“That’s it, mister! You just lost your brain privileges.”

“Me, aggressive?! How dare you?! Maybe you’re right… I command you to help me be a nicer person!”

“You all love Chum Day? It was me! I invented Chum Day! Chum Day is copy-written by me!”

“It is becoming increasingly obvious. I can deny it no longer. I am small.”

“No resting! This monument celebrating my glory isn’t gonna build itself. Move faster!”

“Goodbye, everyone. I’ll remember you all in therapy.”

“My eyeball is having a toothache.”

“I, the amazing Plankton, with the use of prestidigitation, will make a Krabby Patty disappear before your very eyes.”

What is Plankton’s full name? 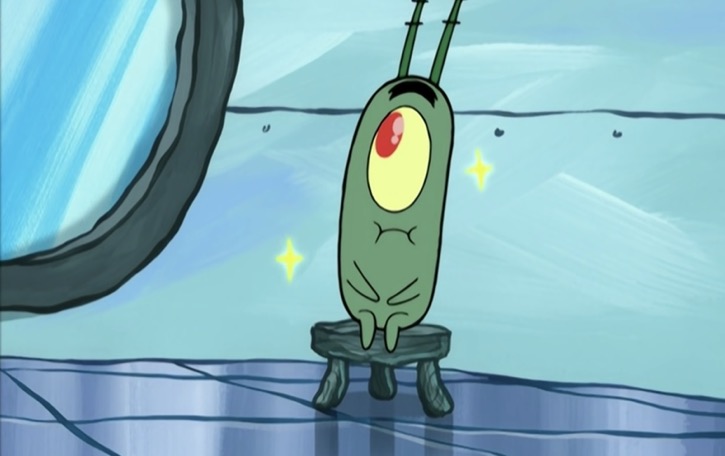 Why is Plankton evil in SpongeBob?

Plankton desperately seeks to steal Mr. Krabs Krabby Patty recipe and put the Krusty Krab out of business with his own restaurant, the Chum Bucket. 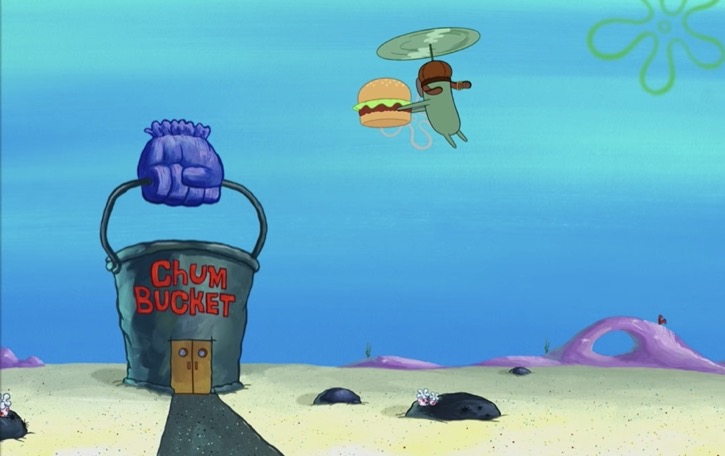 Did Plankton and Karen have a kid?

Plankton and Karen have a son named Chip Plankton II. 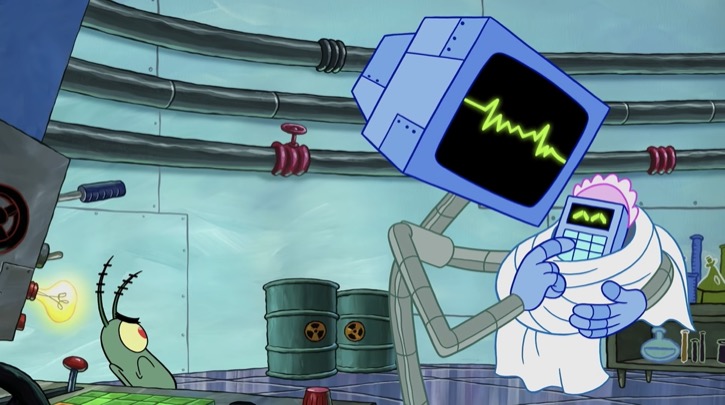 How old is Plankton in SpongeBob?

Plankton in SpongeBob is 59 years old. 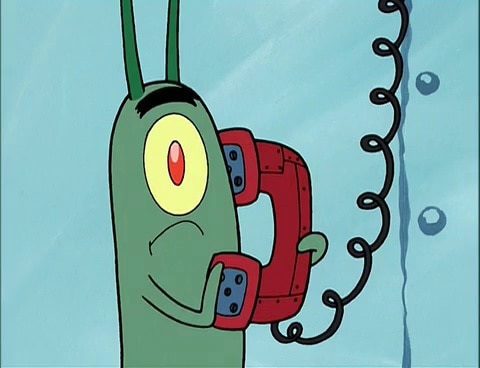 Get to know the rest of the SpongeBob cast, like Gary, Pearl, Sandy Cheeks, and the top SpongeBob villains. Learn even more about Plankton SpongeBob characters on Youtube.