Pearl Krabs is one of the main characters in the Nickelodeon SpongeBob SquarePants cartoon. Pearl is a young whale and Mr. Krabs’ daughter. He is the frugal owner of Bikini Bottom’s top restaurant, the Krusty Krab.

Pearl SpongeBob’s parents are Eugene H Krabs and Mrs. Krabs. When she was born, Mr. Krabs bought a banner to celebrate “It’s A Boy,” which was on sale. He crossed off “Boy” and wrote “Girl” to save a few bucks.

Throughout the series, Eugene Krabs continues to pinch pennies and try to save money on her birthdays. On one birthday, Mr. Krabs gets Pearl one balloon for her and all her friends to share, and at another party, he hands out paperclips as party favors.

Pearl starts small but quickly outgrows her father as a teenager, and Mr. Krabs’s money-saving schemes keep following her. As a teen, rather than going to Mrs. Puff’s Boating School, her father teaches her how to drive to save the cost of going to school.

Later in high school, Pearl did very well in class and is considered very smart. She also joins the cheer team and enjoys cheering all over Bikini Bottom.

As Pearl gets wiser and older, the possibility of going to college is exciting to her father. One day Mr. Krabs would like Pearl to take over the family business and run the Krusty Krab.

Besides school and cheer, Pearl also enjoys other hobbies.

One of Pearl’s favorite stores is Grandma’s Apron, located in the Bikini Bottom Mall.

Pearl works there as an assistant, and while she is there, she loves baking cookies, knitting clothes, and relaxing in the store’s rocking chair.

Pearl is good friends with SpongeBob and Patrick Star, and she sees Squidward Tentacles as her uncle, who she lovingly refers to as Uncle Squiddy.

Pearl lives in a hollowed-out anchor with her father, and her bedroom is just as fun and colorful as the teenage room! The Krabs’ home has a nautical theme and many wooden features.

On the other hand, Pearl’s room has teal, floral wallpaper on the walls and a pink, fuzzy carpet. Pearl also has hung some of her favorite things, such as sports pennants, posters, and photos of her surfing on the ocean’s surface.

Pearl is a very intelligent whale and many fan’s favorite character. She is excellent at math, and Mr. Krabs has been trying to get her to be the Krusty Krab bookkeeper for some time. But Pearl is still a teenager, so she spends much of her time at the mall.

Pearl is the opposite of her father, and she enjoys spending large amounts of money at a time and trying to fit in with the other kids attending Bikini Bottom High School.

She is very friendly, happy, and always in high spirits. She also has a lot of athletic talent! She is a good cheerleader and often carries her pompoms wherever she goes.

Her cheering can get a little dangerous because she is so big that the building she is in always shakes whenever she tries a cheer skill. Besides math and cheer, Pearl is also a pianist and a saxophonist.

In season 8, we discover that Pearl holds bubbles in her nose whenever she is underwater, which is how she breathes while in Bikini Bottom. Since Pearl is a whale, she does have to breathe air. Because of this, Pearl will often have to go to the water’s surface and breach.

Even though she is the daughter of Mr. Krabs (a crab), Pearl is a sperm whale. Pearl’s mother, Mrs. Krabs, is never seen, but she is a whale, just like her daughter. Pearl has grey skin and blond hair that she likes to have in a ponytail and tied back with a pink scrunchie.

She is the tallest of the main SpongeBob SquarePants characters, but she is small for a sperm whale. Pearl is usually seen wearing a pink top with the letter “P” monogrammed on it, a magenta skirt, and barnacle-crafted white go-go boots.

“See, no one says “cool” anymore. That’s such an old person thing. Now we say “coral,” as in “That nose job is so coral.”

“You really shouldn’t have!”

“As far as disasters go, that was really fun.”

“This dance is so last year!”

“Daddy, the house is full of burglars!”

Pearl is not SpongeBob’s girlfriend. Pearl’s friends tease her, and they call SpongeBob her boyfriend however, the two are just friends. 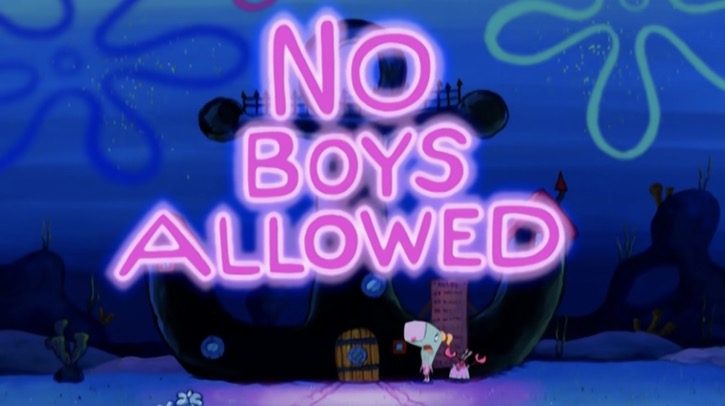 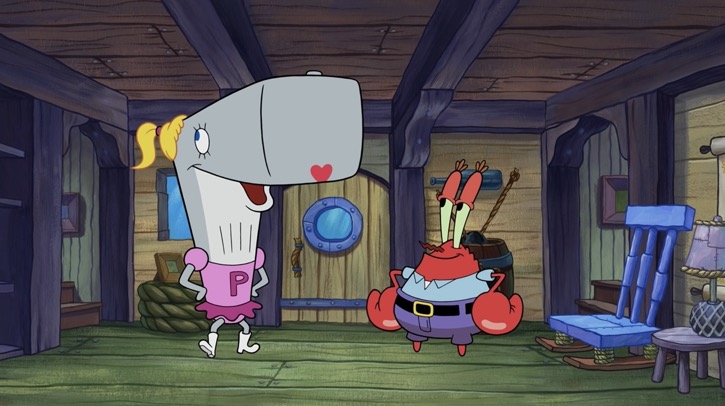 What race is Pearl from SpongeBob?

Pearl is a sperm whale. 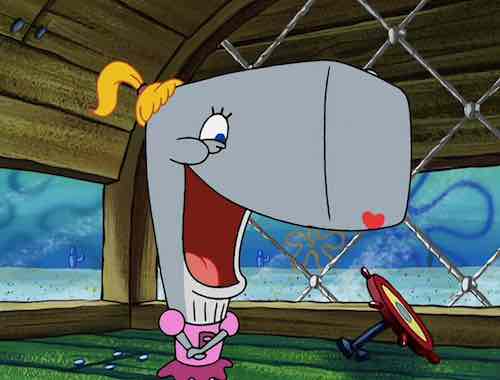 What happened to Pearl’s mother on SpongeBob?

It is not known why Pearl’s mother is not in the SpongeBob series. The SpongeBob trivia book confirmed her mother is a whale but did not say if she was separated from Mr. Krabs or not. 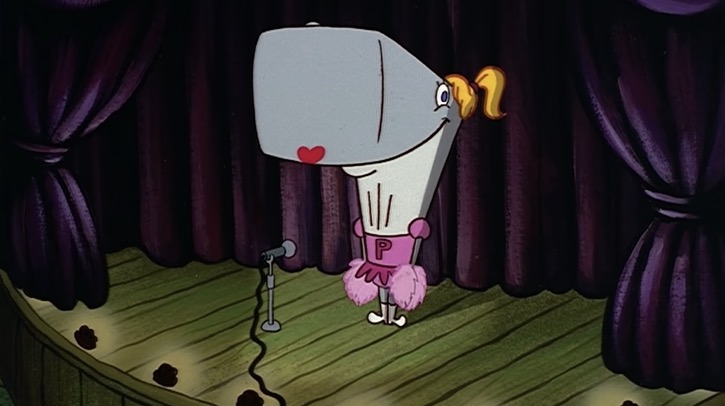 It is not known if Pearl’s mom is dead or alive. Mr. Krabs and Pearls’ mom may have simply separated. In the SpongeBob trivia book, the only details confirmed about Pearl’s mother is that she is a whale. 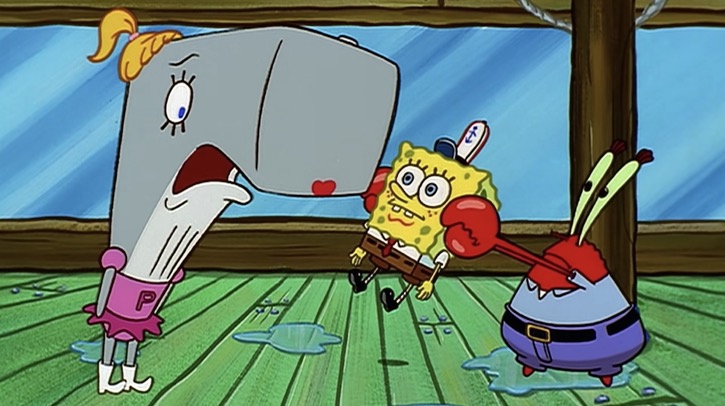 Who is Pearl’s real dad? 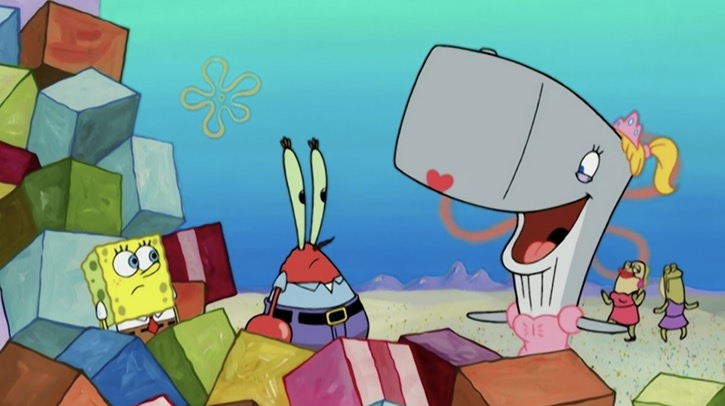 Get to know the rest of the SpongeBob cast like SpongeBob’s pet snail, Gary, Sandy Cheeks, SpongeBob villains, SpongeBob Spatulas, Jellyfish Jam, and Plankton. Learn even more about Pearl on the official SpongeBob Youtube channel.