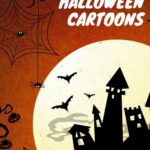 Many people like to pull out their favorite cartoons about Halloween, and Halloween fans are no exception. There are many beloved Halloween classics with cartoon characters, and many are animation favorites.

If you are looking for animated cartoons and movies that are great to watch around Halloween, whether you have kids or not, the following are all solid options.

When the beloved Peanuts franchise did a Halloween special, it instantly became one of the classic cartoons about Halloween. Linus promotes his belief in the Great Pumpkin at the pumpkin patch, which seems to be a Halloween version of Santa Claus.

Unfortunately for him, none of the other groups of kids believe him, instead of going trick-or-treating and to a Halloween party without him.

This Disney Halloween movie is a “package film” containing two stories: the first based on The Wind in the Willows and the second on The Legend of Sleepy Hollow.

This Legend of Sleepy Hollow adaptation is one of the truest to the original story of a schoolteacher in 1790 New England who, after falling in love with the most beautiful girl in town, finds himself haunted by a headless horseman.

The atmosphere in this short puts you in the mood for Halloween, and the animation is incredible.

This film is the first feature-length outing of beloved British characters Wallace, a ditzy but good-hearted inventor, and his quiet, loyal dog Gromit.

In this film, they have started a humane pest control business to keep rabbits out of vegetable gardens, leading to a significant town competition.

Still, the pair may have met their match when a giant rabbit appears. The film parodies classic monster movies and is a great Halloween viewing choice.

This Scooby-Doo show revitalized the franchise with a new twist on the formula that worked to terrifying effect. The gang travels to a moody island off the coast of Louisiana.

Once there, they make the chilling discovery that the monsters aren’t just opportunists in masks anymore. This film features some genuinely scary moments and strange things.

This scary movie was the next Scooby-Doo film released after Zombie Island and deserves to be watched around Halloween in its own right.

The gang goes to New England to visit a Stephen King-like author figure searching for more information about his ancestor. Featuring autumn New England scenery and spooky witches, this movie makes for the perfect Halloween characters to watch.

Monsters, Inc., one of animation studio Pixar‘s earliest hits, tells the story of monsters who frighten children in our world with screams, which their society uses as a power source.

When protagonists Mike and Sully find a human young girl where she shouldn’t be, their world gets turned upside down. Creative and clever, heartwarming and emotional, this is one movie to watch around Halloween where the real monsters aren’t that scary.

The Nightmare Before Christmas (1993)

While originally underperforming at the box office during its initial release, The Nightmare Before Christmas has become a cultural phenomenon.

Jack Skellington of Halloween Town grows bored with his permanent role of putting on Halloween and decides to try Christmas instead. Incredibly striking visuals and memorable characters ensure The Nightmare Before Christmas will be a classic cartoon about Halloween for years to come.

In this animated series of popular kids’ films, Hotel Transylvania is one of the first cartoons about Halloween that depicts a safe hotel for monsters, led by Dracula himself, where monsters can gather in peace.

The story, however, focuses on Dracula’s relationship with his teenage daughter, who is eager to go out and see the world, to the dismay of her overprotective father. But when a human boy stumbles across the hotel, the worlds of humans and monsters will never be the same.

Norman is a boy who can talk to the dead, which makes him an outcast in his small town. But upon his uncle imploring him to perform a ritual to protect the town from a curse placed by a witch killed there 300 years earlier.

The ritual causes the undead to begin laying siege. This film is best for older kids since the movie has strong themes of wrongful run throughout and scary characters. On a positive note, it also shows strong teamwork and respect for others.

Not as well known as some of the other examples on this list, Igor puts the stereotypical mad scientist sidekick front and center as he attempts to become a mad scientist himself.

It’s cute and charming and teaches one of life’s most important lessons: that you should never judge someone based on their appearance.

This computer-animated reboot of the spooky, quirky Addams family forces the classic characters to confront traditional society when it infringes on their beloved, isolated home.

Like other Addams Family productions, it celebrates the weird, quirky, morbid, and wonderful, making it a great Halloween watch.

Good cartoons about Halloween don’t need to focus on Halloween. Animated productions have embraced diversity with the Latin American holiday Day of the Dead, which is similar to Halloween and takes place at the same time of year.

The Book of Life is a colorful, culturally relevant tale of a boy named Manolo who goes on a magical cosmic adventure while trying to decide if he should follow his family’s expectations or his own heart.

Like The Book of Life, Coco also focuses on The Day of the Dead. It tells the story of Miguel, a boy who wants to become a musician against his family’s wishes.

Soon, he turns into a friendly ghost and journeys into the afterlife to gain permission from his ancestors to follow his passion.

Later, he returns to the human world with a more well-rounded perspective on life. It’s a movie about family and never allowing your loved ones to be forgotten.

This 2012 horror movie is a remake of a short of the same name Tim Burton directed in 1984. In the film, a boy named Victor Frankenstein manages to revive his dog, Sparky, after the beloved pet is hit by a car.

Another stop-motion animated film, this one, is based on the acclaimed book of the same name by Neil Gaiman. It tells the story of Coraline, a girl who discovers a tunnel to another world after feeling neglected by her parents.

She discovers versions of her parents, who are much more loving in the new world. However, things take a turn when they want her to stay with them forever, and she must make a harrowing escape back to her world.

An animated stop-motion film by Tim Burton, this one follows Victor. His nouveau riche family arranges for him to marry the daughter of an impoverished noble family, thus improving both families’ stations.

However, when he is accidentally dragged into the underworld, he meets a dead woman named Emily and finds himself torn between the two women.

With a colorfully vibrant world of the dead contrasting with the dreary world of the living, this movie has much to say about life, death, and love.

As the title implies, this film is about a monstrous old house and the neighborhood children trying to discover its secret. Monster House was a technically advanced film for its time, featuring performance capture and new digital rendering processes.

These are cartoons about Halloween because the events in the story take place on Halloween night, and it can be a pretty scary cartoon despite its haunted house and PG rating.

Perhaps one of the earliest cartoons about Halloween, The Skeleton Dance, is a short film depicting skeletons dancing in a graveyard. The creativity on display here with how the skeletons move and interact is just astounding.

If you are interested in animation history with a Halloween twist, this film is one to check out.

This classic Disney Halloween episode introduced the character Witch Hazel and followed a Halloween night where she, Donald Duck, and his three nephews all play pranks on one another in their Halloween costumes.

The moral of the story is that you must be generous on Halloween, or tricks will come your way.

This Warner Brothers short cartoon about Halloween is considered among the best Halloween-themed shorts made by the studio. Witch Hazel faces off against Bugs Bunny when his Halloween mask challenges her status as the ugliest one of all.

It is noteworthy that such a similar character (both being played by legendary voice actress June Foray) was used by rival Disney and Warner Brothers.

Mickey, Donald, and Goofy, who run a ghost exterminator company called Ajax Ghost Exterminators, get a call to scare off some ghosts.

They don’t realize the call came in from some lonely and bored ghosts. The spooky ghost is looking to have fun pranking the three exterminators and leading them on a wild cat-and-mouse chase.

Over the years, many entertaining, moving, atmospheric, and spooky Halloween cartoons and animated films have been produced. Whether traditionally animated, computer-animated, or animated using stop motion, each entry above should interest animation buffs and those who love Halloween.

What is the most popular Halloween cartoon?

The Nightmare Before Christmas is considered by many to be the most popular Halloween movie.

What was the first Halloween cartoon?

The first Halloween-related movie was Lonesome Ghosts (1937) with Mickey, Donald, and Goofy.

What is the scariest cartoon ever?

One of the scariest cartoons movies kids can watch is ParaNorman where normal talks to the dead.

What are some Halloween rhymes?

Ring Around the Pumpkin is the most popular Halloween nursery rhyme.