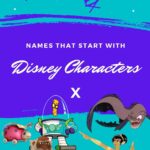 Here is a list of Disney character names that start with the letter X. This list of names will remind you of the Disney characters with an X name that you completely forgot about.

14 Disney character names start with X from popular shows and movies, not including video games.

Some of the most popular X Disney characters are Xerxes from Aladdin, the sorcerer Mozenrath’s sidekick, and XR, the first robotic space ranger in Star Command. See the list of Disney X names below.

More Disney Characters that start with X are coming soon as more Disney movies are released. Check back soon!

Xandra | Legend of the Three Caballeros

Xandra is the Goddess of Adventure in the Legend of the Three Caballeros. Xandra helps guide Donald Duck, Panchito Pistoles, and José Carioca as they travel the world.

Xerxes is the loyal floating eel of the sorcerer Mozenrath. He often fumbles his word and misspeaks but always remains by Mozenrath’s side.

XL is the older robot brother of XR in the animated series Buzz Lightyear Star Command. XL is often portrayed as the villain and is rebuilt with scrap parts, which is why his armor does not match.

Xavier is a blacksmith in the kingdom of Corona, where Rapunzel lives. He is a recurring character in Tangled: The Series and is often sought out for his wisdom and advice.

X-Buggy is a red-colored dune buggy that Lilo & Stitch are often shown riding around town in.

Xyla is a toy ladybug xylophone with wheels. Children often pull Xyla around with her string and play music with the xylophone on her back.

X-Ray is a member of the U-Foes in the Marvel animated franchisee. Due to radiation, he glows purple and has been permanently transformed into a living energy field.

Xavier is often seen with Fred, who likes to sit by the big tree in their backyard. When Xavier meets a young version of Phineas and Ferb, he gets the opportunity to show how really smart he is.

David Xanatos is the CEO of Xanatos Enterprises. He sold an ancient coin to get funding for his new company, which his father disapproved of.

Alex Xanatos is the son of David and Fox and was named after Alexander the Great. Alex grew up fast and dressed as a Gargoyle for his first Halloween.

Fox Xanatos is married to David and a mother to Alex. She considered herself the leader of The Pack until David revealed to her that he was the unspoken leader. Unlike her husband, David, she refused her family’s inheritance.

Petros Xanatos is David’s father and Alex’s great-grandfather. Petros set aside his disagreements with David to be present at Alex’s birth.

Xerek is a deleted villain from The Incredibles. Xerek was originally chosen as the main villain but was later replaced by Syndrome.

Back to Animated Disney Characters

More Disney Characters from A to Z