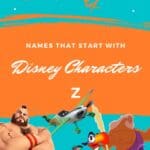 Here is a list of Disney character names that start with the letter Z. This list of names will remind you of your favorite Disney films, heroes, and villains.

Some of the most popular Disney character names that start with Z are Zazu, Zeus, and Ziggy. See the full list of Disney Z names below.

More Disney Characters that start with Z are coming soon as more Disney movies are released. Check back soon!

Zelda | The Fox and the Hound 2

Zephyr | The Hunchback of Notre Dame 2

Back to Disney Cartoon Characters