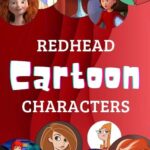 For decades red hair characters have been some of our favorite cartoons. Redhead cartoon characters are well-represented in dozens of cartoons and animated movies.

Even though there are several redhead characters, red hair color makes up less than 2% of the worldwide population. The largest population of redheads are in Scotland and Ireland, such as Pixar’s Princess Merida.

Wilma Flintstone is one of the most famous redheads. She is a famous cartoon character who wears a white dress and a white necklace. She is the wife of Fred Flintstone and has appeared in the cartoon The Flintstones and related movies.

Pebbles Flintstone is a little girl redhead cartoon character appearing in The Flintstones animated franchise. She is the daughter of Fred and Wilma Flintstone, with whom she gets her red hair.

Daphne Blake is one of the main female characters in the Scooby-Doo franchise. She works for Mystery Inc and always finds herself in dangerous situations. Daphne has long red hair with a purple headband.

Phineas is a young boy with bright red messy hair and a triangular-shaped face with big eyes. He is the son of Linda, stepfather Lawrence, a brother of Candace, and a stepbrother to Ferb. Phineas is one of the main two characters in the Phineas and Ferb franchise.

Candace is the redheaded character that is Phineas and Ferb’s older sister. Candace has long red hair just past her shoulders. Candace spends most of her time trying to get her younger brothers, Phineas and Ferb in trouble.

Princess Fiona has short red hair, green skin, a green dress, green shoes, and a green gem necklace. She is the wife of Shrek and gets her royalty from her parents, King Harold and Queen Lillian. Princess Fiona also cares for triplets in the Shrek movie franchise.

Jessica Rabbit has long, bright red hair to the middle of her back, red lips, and purple eye shadow. She is also known for her fitted red dress and is known as one of the hot redheads. She is a cartoon actress and singer at the Ink and Paint Club in the film, Who Framed Rodger Rabbit.

Poison Ivy has long red hair and is an eco-terrorist in the Batman series. Poison Ivy first appeared in Batman 181 and is obsessed with plants, botany, and extreme environmentalism. Poison Ivy is often depicted teaming up with fellow bad girl Harley Quinn to battle Batman.

Mary Jane is the redhead crush of Peter Parker, a.k.a. Spider Man. Mary Jane has been featured many times throughout the series in cartoons and movies, but always with beautiful long red hair.

Darl is a young girl with short red pigtails. She wears braces and a blue sweatshirt that says, “Rock n Roll Girl.” Darla has a small but very memorable role in the animated movie Finding Nemo. By banging on the fish tank, Darla scares all of the fish, fearing her next visit to the dentist’s office.

Jessie has long braided red hair that is parted down the middle. She also wears a red cowgirl hat and has a spunky upbeat personality. Jessie is one of the main characters in the Toy Story movies, first introduced in Toy Story 2.

Princess Merida has long, curly red hair. She is an official Disney Princess from the Scottish kingdom of DunBroch and first appeared in the movie Brave. As the main character, Merida is a tomboy and enjoys riding horses and shooting her bow and arrows rather than trying on dresses and going to parties.

Princess Ariel has the brightest red hair of all cartoon characters. She is the leading princess in the Little Mermaid movies, the daughter of King Triton, and one of the most popular Disney characters of all time. Princess Ariel is gifted with a beautiful voice but is willing to give it away for the chance at true love.

Sally has long, straight red hair down to her waist. Sally first appeared in the movie, The Nightmare Before Christmas as the love interest of Jack Skellington. She is shy but eventually can express her love and find a happy ending on Spiral Hill.

Eep has short ginger hair parted down the middle. Eep is the oldest daughter of Grug and Ugga Crood. She is a cavewoman from the animated Croods movies. Eep hates being in the cave and craves adventure, which she finds with her family after a large earthquake.

Anna is a new Disney redhead with long red hair, which is worn up with her crown and down in pigtails throughout the Frozen franchise of films and short movies. Queen Anna is the younger sister of Elsa and the ruler of Arednelle. In Frozen 2, Elsa decides to stay within the forest as the fifth spirit and gives the throne of Arendelle to Anna.

Roxanne has long, thick red hair and is the love interest of Max Goof. Roxanne attends Spoonerville Highschool with Max, where he haphazardly strives to get her attention. They both like one another, but their shy personalities often sabotage their chances.

Helen Parr has short red hair and is known as Elastigirl from the Incredibles movies. Helen is the husband of Mr. Incredible and mom to Violet, Dash, and Jack-Jack, who all have unique superpowers.

April O’Neil has long red hair and often wears yellow clothing. She is a news reporter and best friend to the Ninja Turtles. She is great friends with Leonardo, Donatello, Raphael, and Michelangelo, although her love interest centers around Casey Jones.

Lois Griffin has short red hair and red lipstick. She is often seen wearing a turquoise blue shirt, tan pants, purple shoes, and green earrings. Lois is the wife of Peter Griffin and mother to Meg, Chris, and Stewie. She first appeared in the Family Guy animated tv show.

Kim Possible has long red hair and a sporty figure. Kim attends a high school where she is the popular girl and cheerleading squad team captain and gets straight A’s in her classes. When she is not in school, Kim fights crime as a hometown vigilante and has good working relationships with local law enforcement.

Anastasia has long red hair, usually worn in an updo with a crown or ponytail. During her country’s revolution, she gets trapped inside the borders while her friends and family escape without her. She grows up in her homeland as an orphan names Anya for an entire decade before her life takes another turn.

Syndrome has long red hair spiked up like a flame. Syndrome, in his youth, went by the name Buddy Pine and Incrediboy before growing into a capable villain. He tries to take down the Supers by inventing Omnidroids, fighting robots under his control.

There are more and more red hair characters in cartoons and animation added daily! We hope you enjoyed this list, and if you can share it on social media, that would be awesome! Here is another outside resource for Disney redheads.

Who has red hair in Disney? 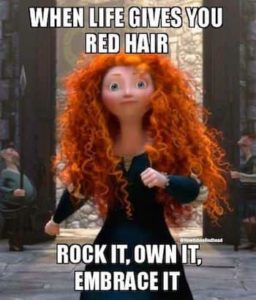 What Disney Prince has red hair? 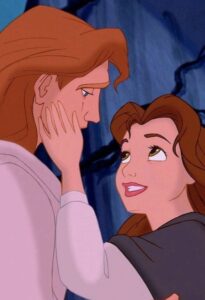 Disney Prince Adam has long red hair. When he transforms from the Beast back to his human form we see he has reddish brown hair.

What Disney villain has red hair? 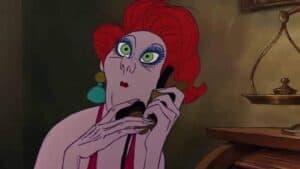 Madame Medusa is a Disney villain with red hair in the 1977 animated movie, The Rescuers. Anastasia Tremaine also has red hair throughout the Cinderella series of Disney movies.

What villains have red hair?