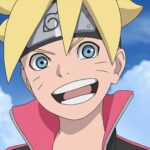 First appearing at the end of the original Naruto manga, Boruto Uzumaki is the son of Naruto and Hinata Uzumaki. A couple of years later, he also got a sister named Himawari.

One day when Naruto’s inauguration as the seventh Hokage takes place, Boruto suffers a traumatic encounter with his sister Himawari, who is two years his junior.

Baruto tries taking his sister’s toy from her, so he doesn’t end up carrying it all day. After a quick tug back and forth, he accidentally rips off the head of her favorite panda toy. Himawari activates her Byakugan and attacks Boruto in a fit of rage.

Naruto arrives in time to shield his son, only to be knocked unconscious by Himawari’s powerful blow, striking his Chakra points. Boruto tries to hide from Himawari in a closet, but she has no problem finding him. From that point on, Boruto swears never to draw the fury of his little sister ever again.

Boruto inherited many of his father’s physical traits, resembling him greatly from a young age to adulthood. Boruto has blond hair styled in random spikes projecting from his head and four whisker marks applied, two on each side of his face.

Though his eyes possess a blue hue like his father’s, they are shaped more like his mother’s. Despite his mother’s milky eye color, Boruto’s eyes are even bluer than Naruto’s.

Boruto can be seen wearing black or dark-colored clothing in his childhood, evident in the black tracksuit he often sported when he was five years old.

He often takes a more casual approach to how he dresses, preferring to keep his dark jacket unzipped—reflecting a few parts of his personality, which we’ll get to later.

His affinity for black jackets covering the rest of his outfit continues as he grows older. Besides the color black, he occasionally throws in dark shades of pink, which can be seen when he donned the Uzumaki clan symbol on his back, for example.

Through his adventures and terrible battles, Boruto acquires a large, jagged scar running from the top of his eyebrow down over his eye, with the tip situated on his cheek.

His forehead protector has the same symbol Naruto wore on his, with the addition of a slash running through the emblem. He also wears a fingerless glove on his right hand to obscure the Ka symbol he acquired.

Although he bears a striking resemblance to his father, Boruto’s personality differs entirely from Naruto’s, though they still share a few similarities.

Hailing from two powerful clans, Boruto is blessed with skills and talents not many can even hope to achieve. Boruto has also shown a certain cunning edge about him even as a boy. It is as if he is psychically wizened by the experiences and knowledge of his parents.

Though Boruto can behave much like his father in an energetic and boisterous manner, he is also less openly whimsical and more reserved with his inner emotions.

His relationships and experiences have influenced his attitude and how he sees the world. Boruto harbors resentment towards his father and, by extension, the title of Hokage.

Ever since Naruto was inaugurated, the many responsibilities of the title often called him away from home for extended periods leaving Boruto to feel neglected, as if he was merely an afterthought in his father’s life of adventure.

This may have contributed to Boruto’s more cynical and sarcastic nature compared to his father.

Boruto can become quite arrogant about his admittedly impressive abilities. He would often boast about his talent and skills in his younger years, causing him to have a higher view of himself.

Consequently, he’d often refuse any assistance from others, believing that he could accomplish anything he wanted to all on his own.

Uzumaki men can seem set in their ways. Boruto often has his preconceived notions and opinions challenged. He proves that he is willing to grow and learn and that his mind is open to changing the views he held before.

This would eventually lead to him becoming a more confident, easygoing, and just young man. He once called his younger self a brat who didn’t take the responsibility of others seriously and only thought of his needs.

Boruto Uzumaki is a powerful fighter and Genin ninja, effortlessly moving to place himself in advantageous positions and can be pretty stealthy if he so chooses.

He excels in combat, as he can tap into various abilities such as ninjutsu, dōjutsu, and taijutsu, among others. As a descendant of the Uzumaki clan, he has a large pool of Chakra reserves he can tap into during battle.

His Nature types are Wind Release and Water Release, with an affinity for Lightning Release. He also has access to his Ka mark, which enhances his already impressive physical parameters and grants him the ability to open dimensional portals.

Though the mark comes at a great price, it allows him to become possessed by the villain Momoshiki, granting him [Momoshiki] Boruto’s power and knowledge.

Boruto differs from his father in terms of his fighting style. His physical prowess is commendable, but he also possesses a sharp mind that proves to be an asset in battle.

Whereas Naruto focused more on overwhelming and surprising the enemy, Boruto always had a plan ready to execute. He employs strategy and tact when engaging his enemies, tipping the scales in his favor with calculated maneuvers.

Boruto can face off against even the most formidable foes combined with his raw talent.

Although he once had a bad experience with tools and believed they cheapened the ninja, Boruto has since adopted a different opinion.

He now views them as neutral, neither inherently good nor bad, a means to an end, eventually appreciating the work that goes into them.

He has a wide variety of tools, like the Shinobi Gauntlet, Chakra blade, and flash bombs.

“A real shinobi can pull a prank without them even noticing!“

“More importantly, as a father, today’s an important day… you know what I mean, right? If you even forget about my little sister’s birthday, then I’m not going to forgive you.“

“Now that you mentioned it, Grandpa used to be a Hokage too, but Dad says that when he was a kid, Grandpa Hokage wasn’t even in this world anymore! That means Dad grew up not knowing a thing about this “enjoyable” father-son situation, didn’t he?! Dad is the only one who doesn’t know what this is like! If he was going to be like this, then it would’ve been better if he was never here from the beginning…“

“Then, please, make me your disciple! There’s someone I want to defeat no matter what!“

“A lecture… later? From you, Dad?! Will you really have the time to do that?! If you’d properly lectured me before then… now, things wouldn’t have turned out like this!“

“It’s fine if you’re the same as you’ve been up until now. All I want is that when we get to meet up every now and then, don’t give me lectures… from now on, tell me about your past instead, dad.“

“When you become Hokage, I’ll be your right-hand man. I’ll guard you well. To me, the Hokage is just a path. Just because my grandpa and dad are Hokage, doesn’t mean that I have to walk the same path. Sarada… What I’m really aiming for is to become a shinobi like your dad. I’m going to follow my own ninja way.“

“I’m just like you. I wanted my dad to notice me. I did lots of stupid things to get his attention. Even got banned from being a ninja once. I’m able to be one now only because everyone forgave me. I might not be much now, but one day I want to be an amazing ninja who can support the Hokage.“