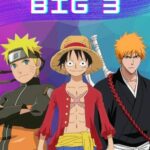 The Anime Big 3 are One Piece, Naruto, and Bleach which have been around for a long time. Without a doubt, these big three anime shows make up the most popular and influential anime franchises ever.

These three anime series have dominated the television airwaves in the mid-2000s. Their worldwide dominance in audience ratings and volume of episodes is overwhelming.

The Big 3 have created hundreds of episodes with additional spin-offs, sequels, and movies to boot.

It’s also worth noting that all three of these have had at least one or multiple movies derived from their animated series or comics. For example, Naruto has had four feature films to date, with the latest slated for a 2013 release.

The Big 3 represents the Shonen anime genre which contains loads of action, suspense, and fighting to keep you on the edge of your seat.

It is safe to assume that the success of One Piece, Naruto, and Bleach have contributed immensely to making anime as popular as it is today by roping in the loyal anime community and new anime fans alike.

Anime is divided into countless different genres, and one has to wonder if the rise of One Piece brought more new fans to Naruto and Bleach or vice versa.

Many fans who enjoy one of the Big 3 also find enjoyment in the other Big 3. Their joint success has helped one another conquer the anime world.

Anyone could sum up this anime in a few words: pirates and devil fruit, but that’d be far from accurately portraying such an immense universe and fantastic show.

Fans everywhere know about Luffy, a young boy with a rubber-like body who commands a pirate crew, and his passionate quest to become the King of Pirates.

Luffy will only become the Pirate King when he finds the One Piece hence, the show’s name.

Luffy isn’t alone in his efforts. His pirate crew is full of unique characters and shenanigans. The prominent people in his crew are Roronoa Zoro, a master swordsman; Nami, a thief and navigator; Sanji, an exceptional chef.

Other people come and go from Luffy’s ship, the Going Merry, and more than a handful of people set their aim at destroying the crew.

The most important characters all have eaten a devil fruit, a strange item that grants powers to whoever eats it for the first time and kills whoever eats more than one.

Luffy ate one and so have done most of the main antagonists of each season.

One Piece has spanned 20 seasons and more than 800 episodes so far. Each season takes the viewer to a different place in the show’s world and brings the characters on new adventures.

It’s not hard to believe how successful the franchise has become with such a fascinating story, dozens of characters, and creative ideas.

Western audiences have seen One Piece come and go from different TV channels. At first, 4Kids Entertainment owned the broadcasting license; then, it went to Fox. Nowadays, you can watch all episodes on Crunchyroll or Netflix.

The sudden license changes created issues with the English dubs, as different networks fired a voice actor and hired another, changing the characters’ voices multiple times.

One Piece is one of the most popular anime shows in Japan. In 2016, One Piece was the most-watched anime, with almost two million monthly viewers.

It’s the 14th most-watched TV show worldwide. It wasn’t always this way, but the show gets more and more fans with every year that goes by.

It’s incredible how famous and well-received this anime is, and it all seems even more astonishing when you realize it has had a 20-year run and keeps going strong after all these years.

The first anime episode aired in October 1999; their latest season aired in July 2019: close to two decades worth of effort for anyone involved, including fans who keep up to date with the story and never miss an episode.

Twenty years seems like a lot, but these good shows are far from over. The original manga hasn’t stopped in 25 years and, according to its creator, Eiichiro Oda and is only 65% complete. That means we have a few more seasons worth of Luffy’s adventures.

Anime fans everywhere know about Naruto, and the younger generation of fans probably started watching anime because of him.

It’s the story of a young ninja who wants one thing: to become the leader of his village. To achieve that goal, he sets his sights on becoming stronger by training and going on different adventures.

The story begins after someone seals an ancient mythical creature inside Naruto when he was born, and most villagers dislike the hero because of that. It takes Naruto 12 years to find out the truth, and that’s when he embarks on his journey.

Naruto cannot train on his own. Kakashi Hatake is the leader of his team, known as Team 7, and the one responsible for his early training.

There are other teams of ninjas in the story who sometimes help or fight against Naruto throughout his journey.

Naruto’s first rival and his teammate, later on, is Sasuke Uchiha, a man on a revenge path seeking to kill his brother, the man responsible for the death of his family.

Masashi Kishimoto created the main story arcs divided into two parts and have 770 episodes. Naruto is shorter with 220 episodes, while Naruto: Shippuden has 500 episodes.

It’s important to note that the 11 films tell the same story as the anime. The first three tell the story of Naruto; the remaining eight correspond to the arc of Naruto: Shippuden.

Naruto has received accolades, great reviews, and accomplishments repeatedly. For example, this anime studio was the third most-watched show in The United States throughout 2020.

It’s also ranked as one of the best anime of all time in most (if not all) lists in magazines and websites everywhere.

A 15-year uninterrupted run doesn’t come without criticism. Reviewers have criticized one sticking point in Naruto: its early animation.

At the same time, other critics have pointed to the number of fight scenes in the show, while others have praised the action, pace, and fight sequences you can find in Naruto.

This show isn’t the longest anime ever. It doesn’t last anywhere as long as One Piece does, but it’s time-consuming. At a 770-episode run, you know you’ll watch a young ninja on his path to glory for a long time.

And while it is more lighthearted and kid-friendly than Bleach, Naruto doesn’t lack in plot or essential moments.

Unlike Bleach and One Piece, Naruto’s run ended in March 2017, so you know you will watch the entire story. Don’t get upset when you finish the final episode.

You have a lot more to enjoy right after that, including comics, video games, and plenty more. The 11 films re-tell Naruto’s story and have something extra you may love!

Bleach has a shorter span and darker tones to the story than One Piece and Naruto.

This anime follows a Soul Reaper. He is a Japanese Death God, something similar to the figure of a Grim Reaper. He is a supernatural entity who harvests souls after their death named Ichigo.

He has to guide souls to the afterlife and defend humans from different evil spirits roaming the mortal world.

Because of his newfound duties and responsibilities as a Soul Reaper, the protagonist travels to different realms and interacts with ghosts, lost souls, and other soul reapers on a similar path.

Ichigo isn’t alone in his efforts. He has to fight against Hollows, human souls who wander the earth after not being able to reach Soul Society which is an afterlife of sorts.

Some Hollows acquire Soul Reaper abilities and a humanoid form, thus becoming an even bigger problem for the protagonist. To fend off all these enemies, Ichigo gets help from Rukia Kuchiki, a weakened Soul Reaper.

Orihime Inoue is a classmate who slowly develops supernatural powers; Uryu Ishida, a priest who isn’t too fond of Soul Reapers.

This show has had different runs. It’s hard to pinpoint the entire arc and story because of the distant spin-off filler arc.

The Bleach universe features anime shows, movies, musicals, and video games. The anime itself had a 366 episode run. Recently, fans have discovered the final arc would get an anime adaptation.

Fans waited more than eight years to see how Ichigo’s story ends. The original run of Bleach started in 2006 and ended in 2014.

Bleach had somewhat of a hectic and unique production process. The music composer was the one thing that remained constant throughout the 12-year original run.

The show had eight producers, three writers, and two screen sizes, and Tite Kubo was the creator. Production issues culminated in Bleach’s somewhat abrupt ending, primarily due to the creator’s health issues.

Bleach is in most top ten anime lists in publications worldwide despite fans’ backlash over the ending.

At the same time, the mixture of these elements, mainly the dark subject matter and the comedy, makes Bleach a unique option for people who want to enjoy something different.

This show spanned 16 seasons and 366 episodes. Most seasons feature 20 to 30 episodes. Every season presents a different challenge for the protagonist and introduces other antagonists who become more complex and harder to defeat as the show progresses.

Although Bleach has a 366-episode run that ended a long time ago, there’s more to come soon. Fans will finally see the final arc in late 2022, adding an extra batch of episodes to what is already a great anime.

If you are looking for other excellent shounen anime to add to your watch list, don’t forget to check out these fan-favorite popular shows, another helpful Big 3 guide, and our biggest cartoon list of 191 plus, Miraculous Ladybug characters.