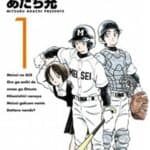 The MIX manga Baseball themed series, targeted toward teen boys, was written by Mitsuro Adachi and published in 2012. MIX Meisei Story is a sequel to Touch, set at the same high school but written in the mid-1980s.

MIX manga follows the story of two step-brothers, Touma and Souichirou Tachibana, as they navigate high school and baseball careers. Their high school, Meisei High School, has not won a baseball championship for three decades.

The brothers want nothing more than to bring fame and glory once again to Meisei High School, and with their unique talents, they may be the only ones who can do it!

Toumo Tachibana: Toumo is the pitcher and star of Meisei High School. When he was young, his father remarried, and he got two new step-siblings: Souichirou and Otami.

Souichirou was born the same day as Toumo, and the two boys are only 10 minutes apart! Their relative age and friendship led to a lot of friendly rivalry growing up, especially as both boys loved to play baseball. They competed for who would get to be pitcher, and Toumo won.

Souichirou Tachibana: Souichirou is the catcher of Meisei High School. He is also Toumo’s step-brother and Otami’s older brother. His father was a star pitcher, and everyone is always confused about why he chose to catch instead, to which he always says that Toumo is the pitcher.

Souichirou enjoys flirting with girls and dating around until he meets Haruka, a girl who works at a local ramen restaurant, and falls in love.

Otami Tachibana: Otami is Souichirou’s little sister and Toumo’s step-sister. She is timid and quiet but later starts to come out of her shell and is a beautiful and popular girl.

She and Toumo have had a very close relationship since they first met. It might even be more than brother and sister-ly, as they are only step-siblings.

Eisuke Tachibana: Eisuke is Toumo’s father, a friendly goofball who works hard and loves watching his son play baseball. He is married to Mayumi Tachibana.

Mayumi Tachibana: Mayumi is Souichirou, Otami’s mom, and Eisuke’s wife. She is beautiful and loves her family.

Punch: Punch is an active family pup. He is a fluffy white Samoyed and a little chubby.

Keiichi Sawai: Keiichi is Souichirou and Otomi’s father, who passed away when they were young. Souichirou faintly remembers his father giving him a baseball glove, but Otomi does not remember Keiichi.

Naoko Tachibana: Naoko is Touma’s mother who died when she was three years old. Eisuke told of her pitching days on her softball team and eventually earning runner-up for the national team.

Haruka Ohyama: Haruka is a pretty girl and a talented rhythmic gymnast. Haruka is also the Meisei High School baseball team manager and a sound scout for talent.

He is recently separated from his wife, and his daughter, Haruka, lives with him and helps him with the team.

Shirou Nangou: A gentle giant power hitter and third baseman. He moved to Tokyo and enrolled in Meisei, likely to stay close to his childhood friend Haruka. Although Shirou is large and strong, he is easily frightened of bugs.

Ryou Akai: A student who gets good grades and is a star soccer player. He quits playing soccer and starts playing baseball when he attends high school. He uses his quickness in center field to run down fly balls and is a pretty good hitter. His older brother, a big hitter, acknowledges his younger brother’s skills even though they were never close.

Arisa Mita: She is the soccer team manager in middle school and continues to manage the team in high school. She sees Otomi as her competitor because of her beauty and popularity with the boys, especially her crush, Ryou Akai.

Ichiban Natsuno: His name means “Summer’s Number One,” He believes his talent and name make him the best fit for the team’s ace pitcher.

Kousaku Koma: A good friend of Touma. He likes to talk and needs to focus more on his classes to get better grades. He is a power hitter on the baseball diamond that strikes out a lot since he is always swinging for the fences and defends the right field.

Tadashi Imagawa: Former middle school baseball team captain and first baseman, sometimes filling in at catcher. An old friend of Nikaidou whose friendship was hurt when Nikaidou kept his heart ailment a secret from Tadashi.

Kenji Nishiki: Kenji left the middle school baseball team after punching coach Kuroyanagi in the face. Kenji returns to play baseball in his sophomore year and is considered by many to be a great defender and a weak hitter.

Daisuke Nikaidou: The middle school ace pitcher whose father donated significant gifts, equipment, and perks for the team. The team dislikes him for his perceived wealth, privilege, and lack of effort on the field.

Later, it was revealed that his light practice schedule and pitching limit count was due to a critical heart condition. The coach made Daisuke the ace pitcher because he was good friends with his father, not because of donations or bribes.

Daisuke eventually has a risky operation on his heart and is forced out of baseball. However, he continues to follow the team’s progress and acknowledges Touma’s genuine skill as the ace pitcher the team needs.

Kuroyanagi: Kuroyanagi is a previous Meisei middle school baseball coach. He led the team past the first-round tournament block for the first time in 20 years. However, the team suffered a terrible tournament loss when he decided to keep Nikaidou in the game during the final inning instead of putting in Touma. After the loss, he stepped down from his coaching position for favored treatment to some players.

Takumi Nishimura: Takumi is a proud pitcher from the Seinan middle school baseball team. He is a talented pitcher, just like his father was, and is known for having a great curveball.

Isami Nishimura: Isami is Takumi’s father and the coach of the former baseball team he played for in his youth. He has had an old rivalry with Tatsuya and Kazuya Uesugi from thirty years ago. However, he has grown up to be a more humble man.

Tomohito Akai: The older brother of Ryou Akai and player baseball player at Kenjou High School. Tomohito is known to be a well-rounded player with strong hitting power.

Ryuuichi Masaki: The proud owner of the Dragon ramen restaurant and the Caffé. He is a big baseball fan, especially of the Meisei baseball team.

Shouhei Harada: A prior Meisei student and friend of Tatsuya Uesugi, Shouhei returns to the school area with amnesia. He is a big boy who was a boxer in school that was never afraid to teach bullies a lesson. After saving Otomi from a traffic accident, her family invites him to stay with them while his memory recovers, but he prefers to sleep in his tent in the yard.

Minami Asakura: The narrator of the MIX anime and a character from Touch.

The series was produced by OLM, Yomiuri Telecasting Corporation, and Shogakukan-Shueisha Productions. Toshinori Watabe directed the series along with Atsuhiro Tomioka, who handled the series composition. Takao Mai created the characters, and Norihito Sumitomo helped by composing the music.