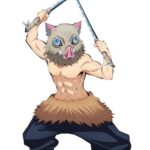 Inosuke Hashibira is a character from the fantasy-horror Demon Slayer manga series, which received its anime series adaptation in 2019. He is one of the main characters in the series and plays a prominent role in the storyline.

Partnering with Zenitsu Agatsuma, Tanjiro Kamado, and Nezuko Kamado, he is also a member of the world Demon Slayer Corps.

Inosuke Hashibira was born to parents who began raising him. His father was abusive, but his mother was kind and caring. His parents were attacked by the demon Doma, Upper Rank Two of the Twelve Kizuki.

His mother saved Inosuke’s life by placing him in the river to float away. His mother and father were then devoured by the demon Doma.

After the death of his birth parents, he was adopted by a pack of boars who raised him in the mountains. Due to growing up in the wild in a family of boars, he developed a unique fighting style and breathing technique. He learned human speech from people who would wander onto the mountain.

Around fifteen, Inosuke Hashibira entered an exam to become a Demon Corps member and successfully passed. He was granted the lowest rank in the Demon Corps, was given a uniform, and was given his two Nichirin katanas.

From there, he began working towards his goal of getting revenge for his mother by killing the demon Doma.

Inosuke Hashibira is pale and roughly fifteen years old. He stands 164 cm tall (5′ 4 1/2″ inches”) and weighs 63 kg (139 pounds). He is heavily toned and muscled, with a prominent focus on his large arm and abdomen muscles.

The Demon Corps uniform makers dislike Inosuke since he always tears the top half of his uniform apart. A swath of brown deer fur holds up his hakama pants.

He forsakes traditional leg wraps for knee-high boar hide, which exposes his heels and toes. The boar hide connects to the sandal base, which acts as a shoe.

The most significant part of Inosuke’s outfit is his large grey boar mask head, which obscures his face. This hollowed-out boar head is his deceased adoptive boar mother, and he has modified its eyes so he may see out of it correctly. He wears this boar head whenever possible.

When Inosuke is not covered, he is considered beautiful with a very feminine face. He has large blue-green eyes framed by thick and long lashes.

He has thin eyebrows and a small yet prominent mouth that is considered well-mannered in its appearance. His thick and unkempt hair falls to just above his shoulders which is black and fades to a blue-teal color at the tips. He has messy bangs that fall just above his eyes.

Inosuke Hashibira is hot-headed with a short temper and always looks to be praised. He assumes everyone wants to fight him, and he is always looking to fight those around him to prove he is the strongest and will continue to attempt to do so even if it is incredibly detrimental to his health.

Inosuke always thinks he is the strongest fighter. Sometimes his temper and overconfidence go too far. After Inosuke fights the Father Spider Demon, Giyu Tomioka has to restrain him so he doesn’t challenge Hashira to battle even though he is badly wounded.

He may have developed some of these personality traits due to growing up with a family of boars.

Inosuke holds a grudge and is very vengeful. He refuses to help those he feels have wronged him or those close to him unless someone directly tells him to do so.

He will make strong claims about situations he will inflict upon those he feels deserve it, such as the demon who devoured his birth parents and caused him to be orphaned.

Though Inosuke Hashibira can be proud, stubborn, rude, and vengeful, he will also be a loyal and devoted friend to those he cares for or looks up to, helping them where he can and listening to them.

He is incredibly kind to Nezuko and confides in her, as she has never yelled at him, mocked him, or laughed at him for not knowing human customs.

Inosuke does not remember the names of others he has recently met or does not care about. Typically, he will only get someone’s name correct after several attempts.

However, he will call those he considers his friends the correct name on the first try after a long time.

Inosuke uses a variation of Wind Breathing he developed called Beast Breathing. With and without swords, his fighting is animalistic and is described as being “like a four-legged beast.”

His attacks come from close range, low to the ground, and are unpredictable. He uses two Nichirin katanas, which are indigo-grey colored with chipped blades for tearing flesh. His katanas have no hilts or sheaths, unlike his fellow world of demon slayer partners. They have cloth wraps for grip.

Because Inosuke grew up on a mountain raised by boars, he has developed specific skills and abilities that aid him in his journies. Inosuke’s senses are enhanced by his environment.

“Better watch out! Cause’ ready or not, here I come!“

“Don’t cry even if you have regrets! No matter how pathetic or humiliated you feel, you still have to go on living!“

“Inosuke’s fate bringing us together really is a miracle. After all, the demon who killed…my mother and my friend…is right before my eyes!! You have my gratitude for making me remember. Just cutting off your head won’t be enough! I’m gonna send you to hell!“

“If Hell doesn’t exist, I’ll create it for you! That’s enough of your crap! Don’t say my mother was miserable, you bastard!“

“You’ve really done it now! And I won’t stand up for it! They protected us! The old guy with the rosary lost his leg! And the guy with the half-and-half haori lost his arm! All the bodies lying around here belonged to comrades I shared my meals with! Give them back! Their leg and arms! Their lives! Everything! Give them back! If you can’t do that…Then you’ll pay for it with a million deaths!“

“We’re comrades…and like brothers, so if someone starts to stray from the path, we all stop him. No matter how hard or painful it is, we walk the right path.“