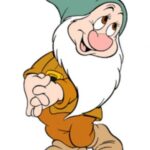 Bashful dwarf is one of the most underrated seven dwarfs from the animated Disney film Snow White and the Seven Dwarfs. He is considered the romantic of the seven and easily gets embarrassed and hides behind his long beard.

Bashful is exciting and endearing in a way that separates him from the other dwarfs, and he has several scene-stealing moments that are impossible to forget.

As his name implies, the character Bashful Dwarf was intended to be shy, but he’s coy about his shyness in a way that makes him very endearing.

He starts the film with a slight crush on Snow White, blushing each time this is revealed, which gives him a bright red face and shows the dwarfs have a much softer side.

His shyness also leads to some opportunities for humorous interactions between the dwarfs. Bashful Dwarf’s personality is the opposite of Grumpy’s, which is revealed during “The Silly Song,” which highlights the dwarfs in a memorable musical segment.

But there’s more to Bashful’s personality than just his shyness. He’s quickly revealed to be the romantic among the group and swoons at the concept of true love.

When Snow White reads a story to the dwarfs, it’s Bashful who suggests that it be a love story, which helps move the plot’s romance forward in a pretty telling way.

Bashful Dwarf’s appearance is somewhat of a softer look with a slender build with a long white beard. Bashful Dwarf isn’t completely bald, but his forehead and other features are also soft.

These include long black eyelashes that are almost feminine in appearance and hazel eyes. His skin is pale, but his nose is pink, highlighted every time he blushes.

His outfit is both scruffy and elegant. Bashful Dwarf wears a brown coat of sorts, and his tunic is light yellowish-brown in color. Bashful’s coat has a single button on the chest and a black belt.

The belt has a gold buckle that goes well with his leggings, which are copper-colored, and his shoes are fashioned in the medieval style that is relatively consistent among the dwarfs. His stocking cap is teal-colored and completes the outfit.

Bashful’s Moments in Snow White and the Seven Dwarfs

Bashful Dwarf has several vital moments early in the film as well. He first appears in the mine where the dwarfs are mining diamonds and gems. Bashful’s job is to dig up the diamonds, and then Sleepy takes them to Doc for inspection.

When the alarm sounds at work, the dwarfs walk home in a single file line singing, “Heigh-Ho,” and Bashful is fifth in line behind Sneezy.

When the dwarfs get home, they know something is wrong. Bashful is sad to find his sugar missing from his cup, but he sees fresh-picked flowers that make him happy again.

Bashful shows Sneezy the flowers in the room, and of course, Sneezy explodes in a sneeze that scatters the dwarfs throughout the room.

Upstairs they all find Snow White, and Bashful says she is “as beautiful as an angel.” Snow White wakes up and names the dwarfs one by one, calling Bashful second in line without hesitation.

After the monster issue is resolved and Snow White makes her first appearance in the film, Bashful gets to sing a verse in “The Silly Song,” and he plays the accordion. Bashful also has another delightful moment when it’s revealed that he sleeps in a drawer.

Bashful shows the most emotion when the dwarfs believe that Snow White is dead. He’s also the first to react when the handsome Prince comes to awaken her, and he gets the first kiss on the forehead just before she leaves with the Prince.

That’s followed by the memorable scene in which she kisses him on the head, and the inevitable blush follows, leading to the chase scene, one of the film’s pivotal dramatic moments.

Interestingly enough, Bashful Dwarf also had a history beyond the original movie. He appeared along with the rest of the dwarfs in an educational short called The Winged Scourge, a film about malaria in 1943.

He also played a pivotal role in “the 7D,” an animated series, and he appeared in a Mickey Mouse episode entitled “Wish Upon a Coin.” Bashful Dwarf continues to live on in the hearts of Disney fans everywhere as one of the most beloved characters ever created.

“My cup’s been washed. Sugar’s gone!”

To see a complete list of the 7 dwarfs names, view our dwarfs list post, and be sure to visit our cartoon characters page to find more of your favorite characters and Disney characters.