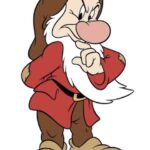 Grumpy dwarf is one of the seven dwarfs favorites from the classic animated movie Snow White and the Seven Dwarfs. Grump is known for his moody and gruff demeanor, but he has a caring heart as you get to know him better. Here’s a brief background on Grumpy and why people love him.

Grumpy is a fan favorite of the seven dwarfs because he is always in a mood. Grumpy makes fans laugh when he fights with Doc, the leader, and challenges his authority.

Grumpy is also easy for movie fans to understand and relate to, which is a good reason he was chosen as one of the final seven dwarfs.

Each dwarf’s name reflects a significant facet of their personality. Like his name, Grumpy is always grumpy. He tends to be a very negative individual, always complaining, and likes to see the bad in all things.

He is dismissive of Doc’s authority over the dwarfs, constantly challenging and doubting Doc’s abilities when it comes to leadership over the group.

Towards Snow White, he was initially condescending, sexist, and rude. He strongly distrusts women and Snow White, specifically when they first meet. Grumpy even argue with Doc about letting her stay.

But as the story goes on, we later see that Grumpy’s negative traits are merely superficial qualities at the most. He is one of the most competent dwarfs, intelligent, opinionated, and compassionate when the situation calls for it.

He also showcased that he is capable of change. Though he treated Snow White as well as the other dwarfs badly at first, he later came to resent his actions and became a more understanding and caring individual who doesn’t shy away from his emotions.

With his signature scowl and glare, Grumpy is probably the most recognizable of the dwarfs. Grumpy has a long pointy beard that reaches down to his tummy slightly above his belt like his fellow dwarfs Bashful and Sleepy.

He also constantly has his eyebrows scrunched together to emphasize that he is, in fact, very grumpy and does not like to have fun and fool around as the other dwarfs do.

Compared to the other dwarfs, Grumpy has a huge and very prominent nose. Grumpy wears a red tunic with green elbow patches and a brown hat. Each of the dwarfs has a differently-colored buttoned tunic and cap.

Grumpy’s Moments in Snow White and the Seven Dwarfs

We first see Grumpy mining diamonds with his companions at the mine. Grumpy’s job is to dig up the diamonds and gems taken by Sleepy to be inspected by Doc, who sorts out the good and the bad.

After their alarm at work goes off, the seven dwarfs walk off singing “Heigh-Ho,” and Grumpy is shown second in line behind Doc.

When they all get back to their cottage, they are on high alert, looking for the intruder. Grumpy stops Happy and Dopey from trying the stew cooking on the fire since it might be a witch’s brew.

After Snow White is introduced to the dwarfs, they agree to let her stay with them in exchange for her service as a cook and cleaner.

Grumpy is the only one against the idea, distrusting the girl and not understanding why she would want to stay with them. He refused Snow White’s order to wash up, so the other dwarfs had to forcefully clean and soap him up.

Dinner comes and goes, then they all sing “The Silly Song,” and grumpy plays the organ.

Before bed Snow White says her prayers and asks for Grumpy to like her.

The following day all the dwarfs head to work and receive a goodbye kiss from Snow White, and Grumpy is the last in line. Grumpy also tells Snow White not to let anyone in the house, making her feel like he cares.

Grumpy famously leads the charge against the Evil Queen when they learn that Snow White is in trouble.

“Ya crazy fool! Fine time ya picked to sneeze!”

“I’d like to see anybody make me wash if I didn’t wanna!”

To see a complete list of the seven dwarfs names, view our dwarfs list post, and be sure to visit our cartoon characters page to find more of your favorite characters and Disney characters.