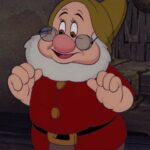 Doc dwarf is the leader of the seven dwarfs from the movie Snow White and the Seven Dwarfs. He looks out for his fellow dwarfs despite being panicky and stammering.

Doc always wears his glasses. He is found first in the mine where he sorts diamonds. He sorts the ones with the ringing sound as good, the ones with clunky as bad.

Doc is the dwarf’s spokesman as well as their leader. He leads all the seven dwarfs without question. Even though he stammers and often bumbles lost in his trail of thoughts, he is respected among the group.

Doc makes sure the dwarfs stay organized and remain rational as a leader. He holds authority over all the dwarfs except grumpy, who often object to his decisions. This objection drives them to have an ongoing rivalry.

He is kind and shows his kindness, particularly to Snow White, by accommodating her to their beds, warning her against allowing strangers into her house, and giving her comfort.

Doc dwarf has a fatherly nature, and he shows it to Dopey, who acts as his right-hand man despite his incompetence and childishness.

The other dwarfs look up to Doc for guidance; however, Doc falls into mild panic attacks when under too much pressure. Fortunately, the other dwarfs assist with suggestions for Doc, and they all work together as a team.

Doc has proven to be very wise when faced with problems. He likes to think carefully about them due to the enormous responsibility, and sometimes he gets very nervous when under pressure.

As a doctor, he shows his skills when examining Snow White after being poisoned. He is also very caring and understanding.

Doc appears as a pompous elderly dwarf who wears glasses and has brown eyes, black eyebrows, and a full gray beard. He has smooth skin and a pink cherry nose.

He is short in size and plump, and he wears a yellow buttoned red fabric tunic matched with brown pants and a brown hat.

Doc also appears with his stethoscope, proving that he is a doctor.

Doc’s Moments in Snow White and the Seven Dwarfs

Doc is first introduced at the mine, where he works alongside Bashful, Sneezy, and Grumpy. In the mine, they unearthed diamonds and other colorful gems.

Sleep brings Doc the diamonds and gems that himself, Grumpy, Bashful, and Sneezy dig. Doc then hits the diamonds with his hammer to listen to the sound they make.

Shortly after the dwarfs introduction, Doc hears an alarm and alerts the other dwarfs that it is time to go. Doc leads the 7 dwarfs home as they sing, “Heigh-Ho.”

As the pack leader heads home, Doc is the first to notice a light on at their cottage and comes to a stop causing his fellow dwarfs to crash into one another.

Doc enters the cottage and holds a candle as they all look around, and then he decides that someone needs to check upstairs.

They all eventually enter the bedroom upstairs led by Doc. When Snow White wakes up, she first notices Doc because of his glasses.

Doc and Grumpy get into an argument about Snow White, and they eventually decide to let her stay to help cook and clean.

Before dinner Snow White has the seven dwarfs wash their hands, and Doc leads the way again while starting the song, “Bluddle-Uddle-Um-Dum.”

After dinner, they all sing songs, and Doc plays a stringed instrument, and he dances with Snow White, as do some of the other dwarfs.

In the morning, Doc leads the group to work but is the first to say goodbye to Snow White and warn her of strangers.

Later, when the dwarfs mourn the loss of their Princess Snow White, Doc is shown crying quietly to himself and comforting Dopey.

When the Prince arrives to kiss Snow White, Doc is the third dwarf to see her waking up. The dwarfs are so delighted that Doc and Grumpy share a joyful hug.

When Snow White kisses Doc goodbye, he is third in line for a goodbye kiss.

“What was I saying?”

“Why, the whole place is clean.”

To see a complete list of the seven dwarfs names, view our dwarf’s list post, and be sure to visit our cartoon characters page to find more of your favorite characters and Disney characters.