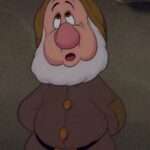 Sneezy dwarf is one of the seven dwarfs from the animated Disney film Snow White and the Seven Dwarfs. At any time or place, Sneezy can erupt in a sneezing frenzy. When he composes himself and speaks, he often sounds stuffed up, as if he has a cold.

Sneezy is a dwarf that is often in the background while Doc leads, Grumpy argues, and Dopey is up to some goofy antics. Then out of nowhere, Sneezy interrupts with a booming sneeze that grabs everyone’s attention.

Often at inopportune times, the other dwarfs jump in to help hold his nose so he doesn’t sneeze and ruin the moment.

Although he suffers from bothersome hay fever, Sneezy dwarf is one of the friendliest dwarfs in the group. He appears to like Dopey’s pranks more than the others, and he participates in many of them.

His participation may be because he has experienced the humiliation of being embarrassed regularly because of his forceful sneeze.

Like the names of most of the dwarfs, Sneezy’s name symbolizes his character. He repeatedly sneezes during the film because of his acute hay fever allergy, and his symptoms frequently hinder him from communicating effectively.

His sneezes have the fury of a hurricane and can blow away anything and everybody in his path. As a result, anytime he feels a sneeze coming on, the other dwarfs quickly cover his mouth with their hands.

Sneezy dwarf has a short and stocky body, but not as much Doc or Happy. He has a round and tufty white beard that extends up to the top of his half-bald head. He stands out from the crowd with a pale complexion, hazel eyes, short black eyebrows, and a swollen red nose.

He wears a light purple tunic with a couple of gold buttons vertically down the chest and orange patches stitched into his elbows in black thread.

His belt has a gold rectangle outlined clasp, crimson leggings, a pair of sienna medieval-style shoes, and an orange stocking cap topping it all.

Sneezy’s Moments in Snow White and the Seven Dwarfs

The dwarfs are introduced in their diamond mine. Sneezy, along with Grumpy, Bashful, and Happy, are in charge of digging up the diamonds and gems. Sleepy takes the gems to Doc, who puts the desirable ones in bags and discards the useless ones for Dopey to sweep.

Doc hears the alarm and tells the other dwarfs to go home. As the dwarfs sing “Heigh-Ho,” Sneezy is sixth in line in front of Dopey as they walk through the forest back home.

The seven dwarfs check their cottage, noticing something is different. Sneezy and Sleepy check the sink and find it empty, so Sneezy tells the others their dishes have been taken, but Happy corrects him and says their dishes are now washed and in the cabinet.

Sneezy is allergic, and Bashful shows him some flowers. Grumpy and Dopey try to hold his nose, so he doesn’t sneeze, making a lot of noise, but it doesn’t help.

He sneezes loudly, scattering his friends across the room. Frustrated, the dwarfs tie his beard in a knot over his nose to keep him quiet.

Upstairs, Sneezy dwarf is the first to compliment Snow White when the dwarves discover her sleeping. Snow White awakens, and as she looks at the dwarfs, she begins guessing their names one by one, naming Sneezy fourth.

Snow White makes their soup, but they must first wash. Sneezy checks the water in the tub by dipping his finger. The water is chilly, and he blubbers.

After dinner, the seven dwarfs sing “Silly Song” to Snow White, and Sneezy yodels a lengthy verse as Dopey watches.

Dopey jumps on Sneezy’s shoulders with a long cloak during the song. This almost causes him to sneeze, but Dopey avoids it by gripping his nose with his feet, and they blunder on to dance with Snow White.

To warn his siblings and Snow White of an impending sneeze, Sneezy jitters both his words and actions, looking down the bottom portion of his coat. Suddenly, Sneezy jitters again, inflating the coat, causing Dopey to jump out the top, revealing Sneezy’s joyful face, and everyone laughs.

When the dwarves get home, they discover that the disguised Queen has poisoned the Princess. Dwarfs chase her to a cliff edge, and a boulder crushes her that she intended to throw at the dwarfs.

Sneezy dwarf is depicted softly grieving with Bashful and Sleepy. When the gorgeous Prince approaches, the dwarfs divide to allow him to walk to Snow White.

He kisses her, shattering the Sleeping Death’s influence. Sneezy is the second to notice her awakening. Snow White kisses each dwarf on the head before leaving with the Prince, kissing Sneezy fourth.

To see a complete list of the 7 dwarfs names, view our dwarfs list post, and be sure to visit our cartoon characters page to find more of your favorite characters and Disney characters.