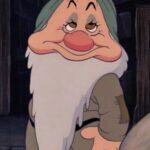 Sleepy is one of the most notable characters in the animated movie Snow White and the Seven Dwarfs. Sleepy always appears tired, where he gets his name from, and always ready for a nap.

Sleepy is constantly yawning, and this provided an opportunity for the animators to exaggerate his sleepy mannerisms. Animators also intentionally made one of his eyes smaller than the other to help him appear continuously drowsy throughout the film.

As his name suggests, Sleepy is a dwarf that is always eager to get some sleep. His eyes are always droopy and weary. In most scenes, Sleepy struggles to stay awake despite the exciting or haunting events around him.

While Sleepy may seem lazy, he is a hard worker. Or, at least he tries his best to work hard as much as possible. He also finds himself involved in clumsy accidents due to his slow reactions.

Sleepy has also redeeming qualities. For example, Sleepy is perhaps the most logical and observant of the seven dwarfs. He was the only dwarf to make the proper assumption that the witch was attacking Snow White at the cottage when the friendly animals kept frantically interrupting them while working at the mines.

Sleepy is an average-sized dwarf who is constantly yawning. Sleepy is depicted with a long beard down to his waist, a light green tunic, red pants, a black belt, and a teal cap.

He also has a plump red nose and a single bottom tooth you can see when he yawns. The easiest way to recognize Sleepy is his main characteristic, in which he is constantly yawning and tired.

Sleepy’s Moments in Snow White and the Seven Dwarfs

Sleepy was first introduced in the film while working in the mines with the dwarfs. Sneezy, Grumpy, Bashful, and Happy dig up the diamonds and gems and give them to Sleepy.

He is responsible for the mine cart. Sleepy takes the diamonds to Doc for inspection, and Dopey cleans up the treasures deemed no good.

The opening mine scene also provided comic relief as Sleepy tried to swat the fly bugging him. Sleepy ends up smacking the deer behind because of his clumsiness, and the deer kicks Sleepy, sending him flying through the air.

The alarm at the mine sounds, and all the dwarfs march home in a single file line singing “Heigh-Ho.” Sleepy is fourth in line behind Happy and is not shown singing since he is tired and yawning.

Sleepy also appears in the cottage when they first meet Snow White. The dwarfs frantically searched for the monster, only to find Snow White sleeping on their bed upstairs.

Naming each dwarf one by one, Snow White correctly identifies the Sleepy third.

After dinner, the dwarfs all sing and dance to “The Silly Song.” Being bothered by a fly again, Sleepy takes a swing with his symbol and smacks himself instead.

The following day the dwarfs head to work, and each gets a kiss on the top of their heads one by one, and Sleepy is fifth in line.

Later, when the forest animals are trying to get the dwarfs attention to rescue Snow White, Sleepy is the first one to catch on to the message and warn the others.

Sleepy was also in one of the final scenes where the dwarfs were weeping over Snow White, enclosed in a glass coffin that the dwarfs built for her. Sleepy is silently weeping while being drowsy, together with Sneezy and Bashful.

To see a complete list of the seven dwarfs names, view our dwarfs list post, and be sure to visit our cartoon characters page to find more of your favorite characters and Disney characters.