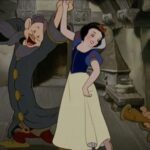 In the early stages of making the Disney film Snow White and the Seven Dwarfs, Dopey was known as only “The Seventh.” Dopey joined the seven dwarfs names, including Happy, Doc, Grumpy, Bashful, Sleepy, and Sneezy.

Dopey’s personality was created late in production and became the adorable dwarf we all know and love today!

Dopey is the only one of the seven dwarfs who does not speak. Instead of talking, Dopey communicates through pantomiming. Happy tells Snow White, “He don’t talk none!”

Even though he has no speech in the movies, he does make some vocal sounds. Mel Blanc, the legendary voice actor, known for voicing Bugs Bunny, provided these sounds. He gets his name from this, as well as his silly personality.

Once he finally got his name from Walt Disney, the animators working on the project were against it because they felt like “dopey” was such a modern term, and it would be out of place in the classic fairy tale world of Snow White.

Walt Disney finally convinced his team to use the name by telling them that the word “dopey” was used by William Shakespeare, which was not true!

Dopey is the youngest dwarf in the family of seven, and he often becomes a joke to the others. He especially annoys the most serious dwarf, Doc, and the crankiest dwarf, Grumpy.

Dopey is a short and skinny dwarf. He is the only dwarf who does not have a beard and is completely bald. Dopey has giant ears, a pink nose, and thick black eyebrows.

Additionally, unlike the other dwarf from Snow White, who has dark eyes, Dopey has baby blue eyes that he likes to flash lovingly at Snow White.

Due to his small size, his green tunic is oversized and baggy. He also wears a purple hat and blue pants.

Dopey’s Moments in Snow White and the Seven Dwarfs

All seven dwarfs are introduced at the same time while they are working at the mine. Dopey is tasked with sweeping up the gems that Doc puts to the side with a dustpan. Dopey even jokes around, pretending two diamonds are his eyes.

Dopey is the last of the dwarfs to leave the mine. He locks the door, hangs the key on a nail in the door frame, and joins the end of the line of dwarfs as they walk home and sing, “Heigh-Ho.”

Back at their cottage, Dopey and Happy find something cooking in a pot, and they want to taste it, but Grumpy stops them.

The group realizes someone or something is upstairs, and they choose Dopey to investigate. Dopey goes upstairs, hears a noise, gets spooked, drops the candle, and crashes back down the stairs into the rest of the dwarfs.

Later, when Snow White meets the dwarfs, Dopey is introduced to her by Happy, who explains that he doesn’t talk.

When the dwarfs are cleaning up for dinner, Dopey walks the wrong way, bumps into a door, and even swallows the bar of soap and burbs up soap bubbles.

In the evening, Dopey gets on top of Sneezy’s shoulders and dances with the princess.

The next day Dopey tries multiple times to get a goodbye kiss from the princess. Snow White kisses him goodbye on the top of his bald head.

Dopey and his fellow dwarfs chase the evil queen to the edge of a cliff, where Snow White’s evil stepmother falls over the edge.

When Snow White is presumed dead, Dopey is seen sobbing on Doc’s shoulder. Later, when the Prince rescues her, and she leaves, he gets a kiss from the princess and the other dwarfs.

After stealing the show in Snow White and the Seven Dwarfs, Disney Dopey appeared in a handful of other Disney projects, such as the short The Winged Scourge, the animated series The 7D, and a cameo in the movie The Lion King 1 1/2.

Dopey was even considered for “The Sorcerer’s Apprentice” portion of Fantasia before Mickey Mouse ultimately got the role!

In the Disney amusement parks, Dopey is the dwarf that can most likely be found. Dopey will often be beside Snow White because he is the most popular of the dwarfs.

He can also be found as an animatronic in Walt Disney World’s Seven Dwarfs Mine Train and Disneyland’s Snow White’s Scary Adventure.

He has also appeared in popular shows such as Fantasmic!, the Festival of Fantasy, One Man’s Dream II: The Magic Lives On!, and Mickey’s Storybook Express.

Besides the film Snow White, Dopey has also appeared in the following movies, shows, and games.

To see a complete list of the seven dwarfs names, view our dwarfs list post and visit our cartoon characters page to find more of your favorite characters and Disney characters.